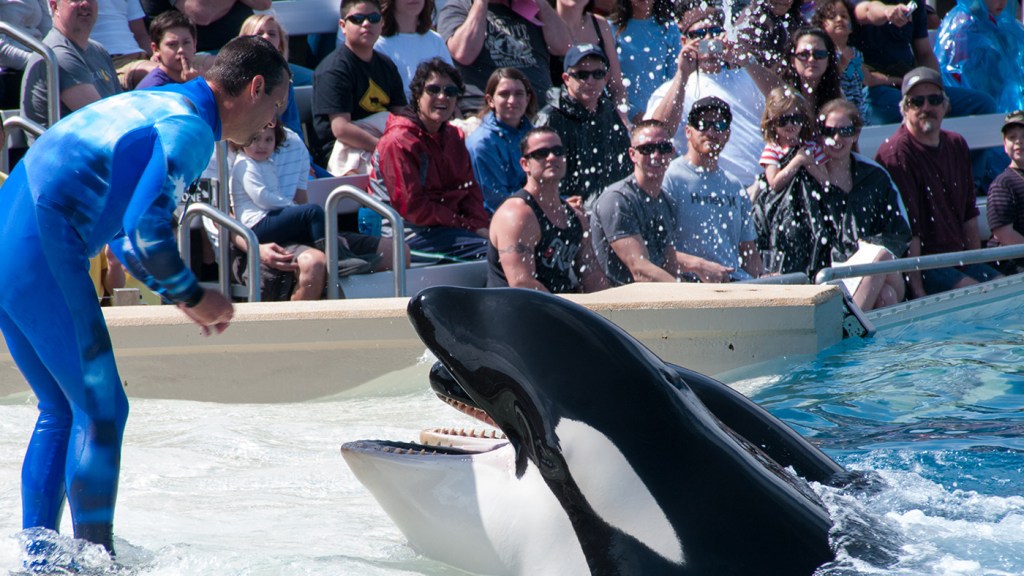 In 2013, Gabriela Cowperthwaite, a relatively unknown filmmaker, released a little documentary about killer whales, or orcas. It was called Blackfish. The film was shot on a budget of only $76,000, and opened in just five theaters — hardly the makings of a blockbuster. But Blackfish had other aspirations: Cowperthwaite was trying to take down SeaWorld, the international theme-park giant built on the backs of a succession of Shamus that, in 2012, was valued at over $2.5 billion.

It was an uphill struggle to be sure for a film shot on a shoestring, but Blackfish was cut with a singular intent. Through interviews and the kind of PowerPoint-like charts you’d expect to see in a board meeting, Cowperthwaite shone a light on what she considered the cruel, callous, and dangerous practices behind SeaWorld’s orca program.

And, according to Karl Taro Greenfield’s recent story in Bloomberg, it worked. Big time …

On Nov. 12 the company reported a 28 percent drop in profit and a 5.2 percent drop in attendance, to 8.3 million, in the three months that ended Sept. 30. It also announced a $50 million cost-cutting measure. For SeaWorld, whose logo features an orca’s dorsal fin, Blackfish has gone from being a public relations problem to a potentially catastrophic threat to a $1.4 billion-a-year business.

And now we learn that Tim Atchison, the CEO of SeaWorld’s parent company, is stepping down, citing this monumental decline in attendance and cash. Here’s hoping his golden parachute is full of dead smelt.

[Caution: Garbled Karate Kid metaphor ahead.] So how did a little movie with a limited release sweep the leg of this corporate Cobra Kai? They took a page out of the Fox News playbook — not the outright lying, but the strict adherence to message. It’s the crane technique of persuasive argumenting: If do right, no can defense.

The movie humanizes, for lack of a better word, orcas, while demonizing the corporate juggernaut that is SeaWorld. There’s no effort to give SeaWorld’s side of the story. (Which is a shame, because I am sure it has some really great arguments for ripping creatures with 15-pound brains out of the ocean, sticking them in glorified swimming pools, and forcing them to jump through hoops — literally — to eat, while simultaneously covering up dangerous and deadly working conditions at theme parks. I’m sure it’s a really great reason.)

And not only did this little film help take corporate juggernaut SeaWorld’s stock value down by a third in just one day of trading, but it’s also emboldened legislators and adorable blond children alike to take aim at the theme parks. Some lawmakers have even introduced legislation to ban keeping orcas in captivity.

So how do we bring a little of that Blackfish thunder to the fight against climate change? I mean, it’s easy to villainize SeaWorld, but how do you make Exxon, British Petroleum, and the Koch brothers look like uncaring automatons of evil? I know, it’s an uphill battle.

Sure, it’s not a one-to-one thing. A puny little $2.5 billion company is a drop in the poisonous bucket of Big Oil and the forces arrayed behind climate denial. And it’s a lot easier not to go to SeaWorld and avoid dolphin shows than it is to give up your car and grow your own kale. I, for instance, have successfully avoided going to SeaWorld for over 7,000 consecutive days and I’ve only been really trying since I saw Blackfish — but my yard remains remarkably free of kale.

But still, there’s a lesson here: There’s power in telling the right story the right way at the right time. If you can do that, you can turn the tide of public opinion.