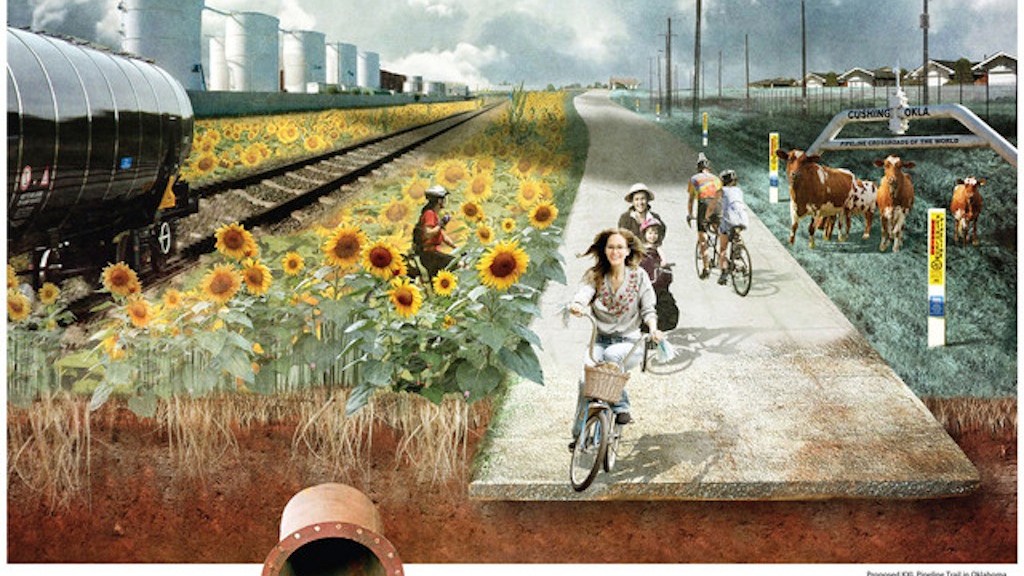 Here is an idea that’s so contrary to reason that it’s hard to even make fun of. (But we’ll do our best.) Kinder Baumgardner, a landscape architect based in Houston, thinks that the towns and counties affected by the Keystone XL pipeline should partner with TransCanada to pay $400 million for “a team of designers, cultural experts, economists, and engineers” to build a bike path along the pipeline’s route.

It’ll be nice! There will be “interpretive elements!” And sunflowers!

It sounds like someone’s playing a joke, but Bloomberg reports that this is very, very real:

The firm sent a letter Oct. 17 pitching the plan to the State Department and TransCanada Corp. (TRP), the pipeline’s sponsor. Its illustrations show scenes of smiling bicyclists riding over buried pipe and by a farmer’s market, Native American teepees, cows, sunflower fields — and a protester in a tree.

Baumgardner thinks this is a great cultural opportunity for us coastal folks who are “not going to meet a rancher. You’ll never meet a Native American. You’re not going to meet an oilman.” Just hop on the KXL Bike Experience, and all your aw-shucks, essentialist, middle-America needs will be served. And, hey, you tree-hugging environmentalists like bike paths, don’t you? Keystone XL: good for culture, good for the environment. Just look at this shiny bike path and ignore literally everything else.