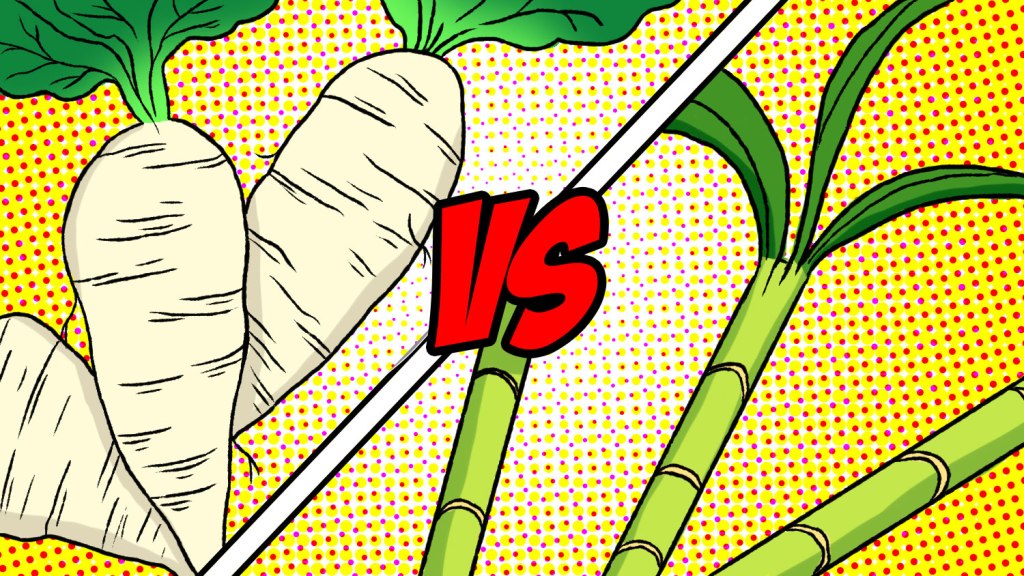 Sugar: We like it. We use it. We try to be environmentally friendly and kind of healthy at the same time. We live in Florida, so I know sugar is grown here. Is it better to buy the brand grown in Florida, which is accused of destroying the Everglades, so we’re buying local and not paying fuel prices? Or is it better to buy from a giant company that just claims NY, NY as its distribution point? I know this means it comes from wherever in the world, and is probably destroying their version of the Everglades as well.

If the world were a just place, cupcakes would prevent heart attacks, M&Ms consumption would be directly linked to a higher IQ, and sugar crops would suck enough carbon out of the atmosphere to halt climate change. At least, that’s the dream of this sweet-toothed advice columnist. Alas, reality isn’t nearly so wonderful.

You and I are far from alone in our affection for the sweet stuff, Kevin: The average American snarfs more than 126 grams of sugar per day, which translates to a rather alarming 30-plus teaspoons. Besides the obvious health implications of our constant nationwide sugar binge, we must also consider the environmental cost of producing those spoonfuls. Preview: It ain’t exactly healthy for the planet, either.

The little white crystals we know as “sugar” (they prefer to go by their formal name, sucrose, at professional conferences and job interviews) come from two plant sources: sugarcane and sugar beets. We had an exciting beet vs. cane smackdown in a column last year, and I encourage you to read that piece after you read this one (or read it now and come back — I’ll wait). Spoiler alert: All sugar production is bad for us and bad for the land, and we should reduce our sugar consumption altogether. Happy New Year!

But let’s look a little closer at this local-or-not quandary of yours, which puts an interesting spin on the sugar question. Sugarcane grows only in warmer climates, with Florida claiming the crown as the top domestic producer (runners-up include Hawaii, Louisiana, and Texas). Florida’s crop is concentrated in several counties around Lake Okeechobee, right at the northern tip of the magnificent wetland ecosystem of the Everglades. That sounds great for Floridians at first — a hyperlocal source of sugar! — but as you’ve noted, Kevin, these two neighbors don’t always get along.

As happens in so many places where agriculture butts up against nature, excess phosphorus in run-off contributes to algal blooms and otherwise mucks up the area’s ecological balance — in this case, feeding weedy plants like cattails and choking out native species like sawgrass. This kind of nutrient pollution can be traced back to several human sources, but a recent analysis by the nonprofit Everglades Foundation found that 76 percent of the phosphorus problem there comes from agriculture — and in that neck of the woods, that primarily means sugarcane.

Another issue is that these plantations alternately hold or flood water according to the crop’s needs, not the Everglades’ needs. Deprived of the historical water flow from Lake Okeechobee, sometimes the wetlands bordering the agricultural area are unnaturally dry, and sometimes they’re too wet, which threatens biodiversity. You may have seen some of these issues in the news recently, as just last year Florida officials killed a deal to buy swathes of sugar company-owned land for Everglades conservation.

As you suspect, sugarcane grown elsewhere is no lighter on the land. Globally, sugarcane production is linked to high water use, water and soil pollution, erosion, and biodiversity loss throughout the tropics, and pre-harvest burning of the fields accounts for sugar’s largest carbon footprint. And with imported sugar, we also have to consider the food miles we’re racking up.

Interestingly, a little more than half of the U.S. sugar crop actually comes from sugar beets, which are grown in the northern states. These sweet tubers spark environmental concerns of their own — namely, the impacts of the herbicides associated with the GMO beets we overwhelmingly raise.

All of which leads us right back to the original question: Should you buy Florida sugar (or whatever your closest local option is)? Well, considering the environmental costs of all sugar production — and it pains my cookie-loving heart to say this — the best thing to do is eat less of the stuff. It’s not as bad as it sounds, though: Honey, maple syrup, stevia, and brown rice syrup are all sweeteners without the wetlands-threatening baggage, and at least some of us can find local sources for them. Make sure to mind the nutritional info on packaged foods, too — plenty of sugar sneaks into our diets that way, even in innocuous-looking snacks like cereal, bread, pasta sauce, and soup.

When we simply must get our fix, then yes, going for the locally grown variety is probably a good bet. Keep in mind that up to 85 percent of the sugar we eat here in the States was grown here in the States, so you’re probably already sweetening your coffee with something local(ish). It can be tough to tell whether that sugar came from sugarcane or sugar beets, but some Team Sugarcane brands do trumpet their “100-percent cane” status on the package.

Really, this is a case where we need to do even more than vote with our dollars. We need to contact sugar brands directly and urge them to take more steps to protect the environment around their plantations and processing mills. And we can get involved with environmental groups fighting to do just that — such as that aforementioned Everglades Foundation locally, or the World Wildlife Fund internationally. There’s plenty of room for improvement here, and stuffing our collective faces with leftover holiday chocolates without doing our part is no way to kick off the new year.

I’m off to munch on a locally grown parsnip, the closest thing I can find to a fruit in January around here. I hear your palate starts to pick right up on the natural sugars in produce as soon as you stop overloading it with the refined stuff. Cheers!