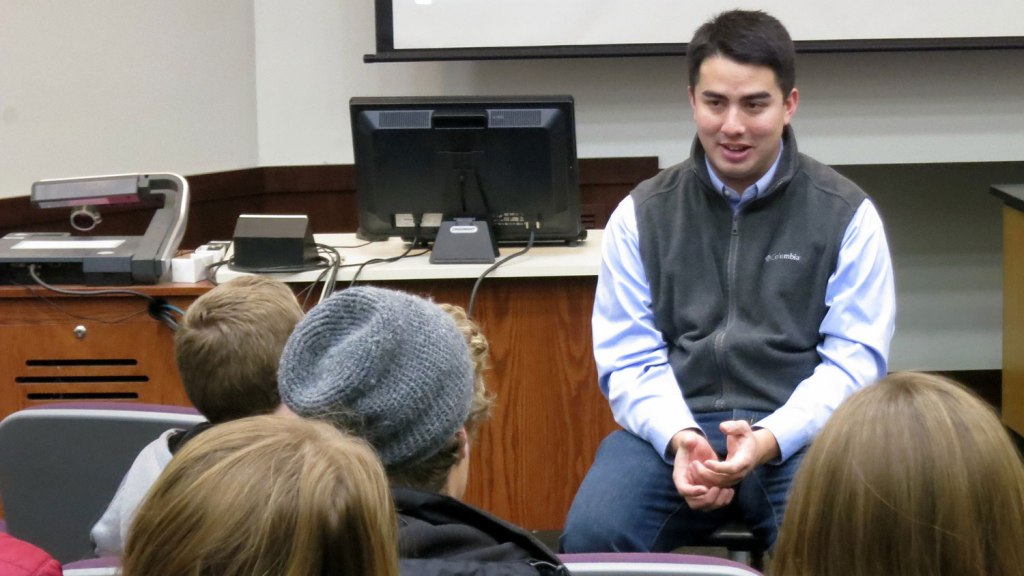 Evangelicals make up about 26 percent of the country’s population, and, as you might imagine, they typically swing conservative on social issues like abortion and gay rights. But it turns out that a growing percentage are also largely pro-life — at least when it comes to conserving the planet.

Ben Lowe is the youthful leader that’s poised to make more evangelicals see the green light. Lowe works for the Evangelical Environmental Network as a national organizer and spokesperson for the Young Evangelicals for Climate Action (YECA). Founded in 2012 by a group of young evangelical professionals and students, YECA lobbies evangelical leaders and politicians alike to start supporting climate change action. Members of YECA have met with senior political officials like Dan Utech — special assistant to President Obama for Energy and Climate Change — and Nancy Sutley, former chair of the administration’s Council on Environmental Quality. A YECA contingent also marched in last year’s Forward on Climate Rally at the National Mall.

At just 30-years-old, Lowe has already run for office and penned a couple of books: Green Revolution (2009) and, more recently, Doing Good Without Giving Up (2014). For him, the message is “creation care,” a doctrine that blends scripture with environmental stewardship. Grist interviewed Lowe recently about what he’s learned in the green evangelical movement.

Lowe and his fellow green-minded evangelicals believe that the poor and underprivileged are bound to be impacted the hardest by climate change, making it a moral obligation to save the planet. “I can’t love God fully if I can’t care for the world that he’s made. And this is a world being affected significantly, often in bad or negative ways, by a changing climate,” Lowe says. “I’m called to love my neighbors as I love myself, and I can’t do that, I can’t love my neighbors, if I can’t address how climate change is impacting communities around the United States and all over the world. It becomes a justice issue, because a lot of the communities facing negative impacts have the fewest resources to adapt.”

When it comes to environmental evangelicalism, identifying as “pro-life” doesn’t just apply to abortion rights anymore; worshipping God and caring for his creation are not mutually exclusive, Lowe says. “We believe that life is sacred, so when we say we’re ‘pro-life,’ we believe we need to care about our human life from what some people have called from the womb to the tomb,” he says. “We are concerned about abortion, and we realize that it’s a very complicated issue that Christians haven’t always engaged in a way that’s very loving or very thoughtful. But we’re concerned about all factors, including environmental factors, that affect human life.”

3. Evangelicals do believe in climate science.

“A vast majority [of the evangelical community] aren’t against climate action, they just have questions and they’re looking for answers,” Lowe says. “A lot of the time the conversation hasn’t been done well.” In fact, green evangelicalism has been around for a while: In 2006, more than 80 evangelical Christian leaders backed The Evangelical Climate Initiative, which argued that the science behind human-induced climate change is valid and that climate action should be a major priority within the evangelical community. Plus, says Lowe, there are a handful of devout evangelical Christians at the forefront of climate change research, including Sir John Houghton, who chaired the IPCC’s climate science assessment from 1988 through 2002. “There has been a distrust of science in some parts of the evangelical community,” Lowe admits, but “there are a lot of evangelical scientists and scientists who are trying to bridge the gap on this. That’s one of the things [we’re working on]: to help evangelicals take good science more seriously.”

4. The youth have all the power.

Lowe visits colleges across the country to talk creation care. And most of the students he speaks with believe in climate change and our role in it — regardless of their party lines. “The vast majority of Christians we’re interacting with there tend to be a lot more concerned and supportive of climate action,” Lowe says. “That comes from millennial and younger generations, partly because these are issues we’ve always grown up with and issues we’re used to hearing about.” The young evangelical movement is growing faster than YECA can handle, he adds. “There’s been a great amount of growth within the last 10 years or so that cares a lot about understanding our biblical role to be caretakers of this planet. And a lot of Christians have questions about climate change and where they fit in on all of that.”

With the country gearing up for another presidential election, the green evangelical movement is more important than ever. “I can tell you that Young Evangelicals for Climate Action will continue to be raising our voices around the importance of climate change and respecting climate and energy policy,” Lowe says. “And we will be eager to hear from any candidates from any party looking to support good, thoughtful, and supportive initiatives to address climate change moving into the future.”