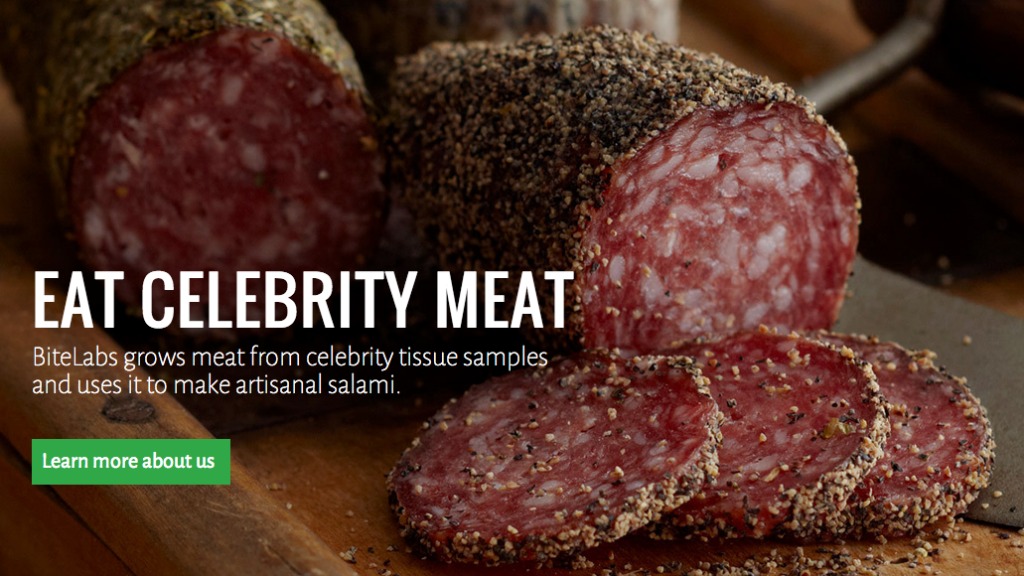 Meat production is wasteful. Lab-grown meat is sometimes offered as a solution … but not everybody’s on board. BiteLabs thinks it can take you from a “meh” to a “YAY!” by creating meat from your fave celebs’ tissue. (Forget TMZ. This is how your celebrity sausage gets made!)

BiteLabs wants to offer salami made of meat cloned from James Franco, Kanye West, Jennifer Lawrence, and Ellen Degeneres, and is enlisting fans to tweet at the celebs and implore them to donate tissue samples. If nothing else, this would have made for the best Oscars Night charcuterie spread ever.

Is it just publicity stunt? Almost certainly, although Vice is oddly convinced. We don’t think Jennifer Lawrence salami will ever be a reality — sandwiches on us if we’re wrong — but it’s funny to think about:

Celebrity meat production requires less than 1% of the amount of land needed for traditional farming. Currently, 70% of the world’s farmland (almost 30% of the entire earth’s surface) is used for raising animals. Meat production today is simply unsustainable: unless a radical change is made, the price of meat will eventually rise out of control. Lab grown meats are the future.

Well. We can’t argue that meat isn’t problematic. We’re just not sure eating Kanye is the solution.

Correction: A previous version of this article said that we couldn’t argue that meat is problematic. Well, we can. The writer has been sentenced to one pastrami and Buscemi sandwich.