If any of the cyclists who participated in the great bicycle messenger mail route were still alive to tell the tale, it would make the ultimate “when I was your age story.”

Picture this: San Francisco, 1894. The Pullman rail strike in Illinois cuts off all rail service west of Detroit, leaving California train-less and thus, mail-less. One “enterprising citizen” and bicycle salesman Arthur C. Banta decides to create a fixie chain gang relay along a 210-mile stretch from San Francisco to California’s Central Valley with eight primary riders. He charges $0.25 for stamps, 10 times the price of standard mail at the time.

I can just hear the conversation now:

Old-Timer Cyclist: When I was your age, we didn’t have no Amazon delivery service or fancy-schmancy computers. We wrote letters with pens and paper and put stamps on them. And when the mail system broke down because of a rail strike, we printed up our own stamps and rode our own fixed gear bicycles on unmarked dirt roads in the dark. And if we broke our ankles, we kept going because the darn mail had to be delivered.

Disinterested Youth: What is paper? [looks at phone] Have you seen the new Iggy Azalea video? It’s awesome.

Here’s more on the ride from Kai McMurtry at the Mission Bicycle Company:

The messengers began in Fresno, rode northwest stopping several times along the way to deliver or capture new mail, and on into San Francisco. B.J. Treat owned the first 20 mile leg out of Fresno. W.B. Atwater was charged with summiting Pacheco Pass, a climb of over 1,300 feet, and so had the shortest leg at 15 miles. The trip was completed by C.S. Shaffer who rode 30 miles from Menlo Park into SF, picked up return mail and rode immediately back to Menlo Park for 60 miles round trip. He was regarded as a “particularly good rider.” Except for the relay into and out of San Francisco each rider was to remain at the northern end of his route until receiving mail for the southward run. A rider having an accident or delay was instructed to continue, on foot if necessary. The awaiting rider, after a reasonable delay, was to ride out to meet him. 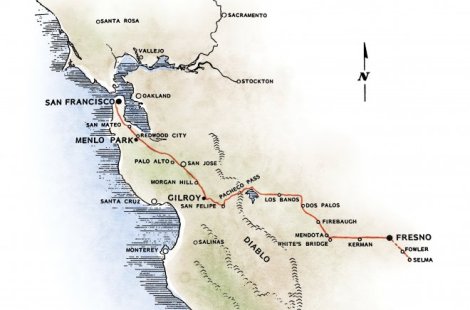 The mail route ended “almost as quickly as it began,” writes McMurtry, when the strikes collapsed. To commemorate the 120th anniversary of this epic ride, Mission Bicycle is selling the “Mail By Messenger” patch — a replica of the original stamp for the route, which misspelled San Francisco on its first printing.