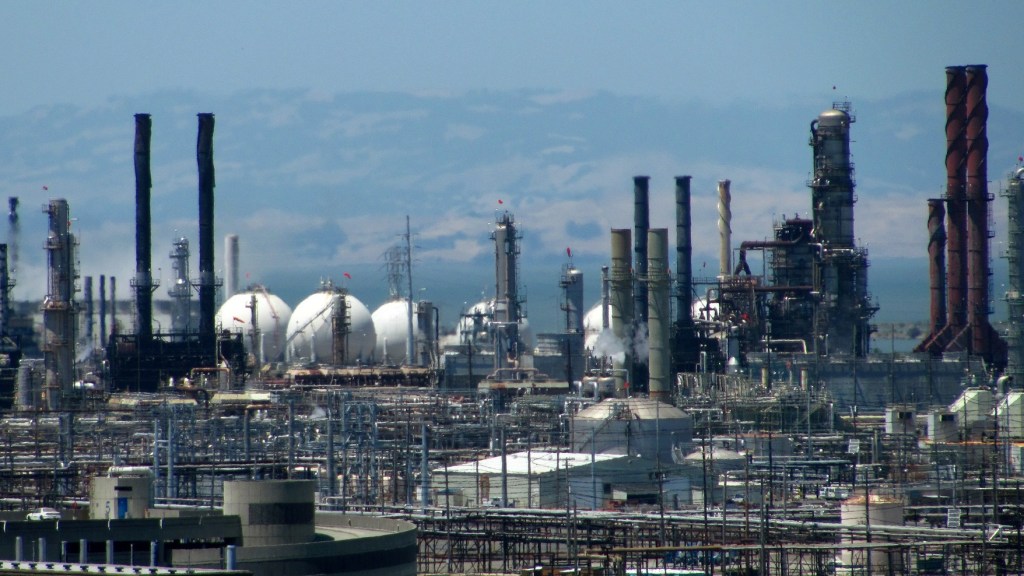 Neighbors of refineries such as this one in Richmond will benefit from California's cap-and-trade program. Jason Holmberg
Please, sir, may I have some more?

The money raised through the sale of carbon credits under the state’s young carbon-trading program is earmarked for projects that help the climate and the environment. And under a law passed a couple of years ago, SB 535, 25 percent of that money must go to programs that provide benefits to disadvantaged communities, with 10 percent to be spent on projects located directly within those communities. Disadvantaged communities are determined by the state based on pollution levels and socioeconomic factors. They are typically poor neighborhoods of color, where health is compromised and lives are cut short by pollution from the refineries and power plants whose greenhouse gas emissions are being capped.

A $156 billion budget signed recently by Gov. Jerry Brown (D) outlines how the state will spend $872 million expected to be raised over the coming year through the sale of carbon credits. (Note that the $832 million figure in the chart below excludes a $40 million emergency appropriation to help manage the drought.)

A quarter of $872 million is $218 million. That money will be spread across projects that benefit disadvantaged communities, such as efforts to reduce pollution from trucks that pass through them. The 10 percent, or $87 million, that must go toward projects inside those communities will help plant trees in cities, provide affordable housing near transit lines, and improve energy efficiency in homes.

Which is great. But, despite its sunny reputation as an environmental and social leader, California remains plagued by income inequality and environmental injustices, and these funds will go only a small way toward addressing those problems. As Vien Truong, an official with the Berkeley-based nonprofit Greenlining Institute, which helped draft the SB 535 bill and implementation plan, notes in a recent Harvard Civil Rights-Civil Liberties Law Review article:

Although there is a rising environmental movement — with corresponding social and financial investments in being “green” — the benefits of clean technology have been available and accessible almost entirely to the wealthy few who can afford them. Many in low-income communities are economically locked out of these resources, even though it could be argued that those areas are in greater need of the energy and cost savings from emerging, clean technologies.

As the wealth gap widens, there is a growing disparity between the effects of environmental policies on the ecological haves and have-nots. …

The passage of SB 535 is an example of a policy effort that is paying more attention to the resource gaps and needs of low- income communities. It is a start, but woefully insufficient. Greater efforts must be made to persuade all environmental policymakers and advocates — even those who are “mainstream” and not necessarily representing low-income communities and communities of color — to develop policies that are similarly responsive to the nation’s highest need communities.

So, no, California’s poor have not hit a jackpot. But at least the state’s high-profile carbon-trading program is paying some dividends for those who are hurt the most by polluters.