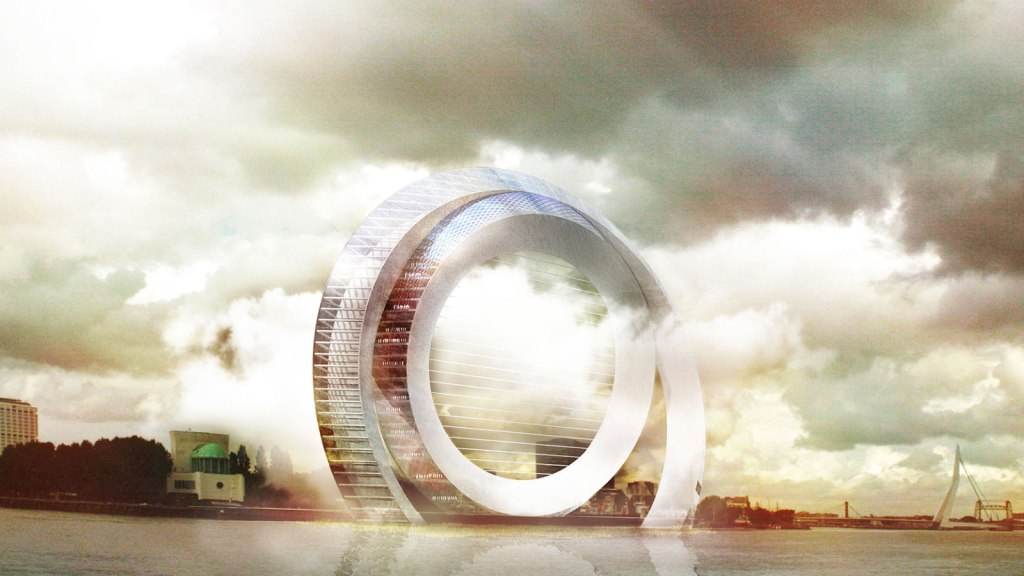 The Netherlands just keeps one-upping the rest of the world. Recently, a Dutch construction firm installed a solar panel bike lane and then engineers went ahead and made another bike path glow-in-the-dark. Not that we’re keeping score or anything.

Now, the Dutch Windwheel Corporation has plans to build a 570-foot structure in Rotterdam that would be equal parts architectural marvel and green-tech wunderkind. Basically, the project would turn the wind turbine* into a high-tech real-estate development.

Here’s Smithsonian with the science:

The Wind Wheel’s design, made of two massive rings and an underwater foundation, plans to incorporate other green technologies, including solar panels, rainwater capture and biogas creation. The biogas will be created from the collected waste of residents of the 72 apartments and 160 hotel rooms that are planned for the inner ring.

The outer ring is set to house 40 cabins that move along a rail like a roller coaster, giving tourists a view of the city and the surrounding countryside, much like the London Eye or Las Vegas’ High Roller, which became the world’s tallest observation wheel when it opened in 2014. The cabins have glass “smart walls” that project information — the current weather, for example, and the heights and architects of buildings — onto the panorama. A restaurant and shops are also planned within the proposed structure.

Another plus: The wind wheel would also be a hub for new green technology businesses and an opportunity to create more jobs in the country.

Well, here’s the catch: The technology needed to complete the project is still in the works. More from Smithsonian:

While aspects of the Wind Wheel’s design seem futuristic, the technology will have several years to advance before final construction gets underway. Duzan Boepel, the project’s principal architect, says that the Wind Wheel is still in its beginning phases. … He says if they prove that the wheel’s bladeless turbine tech can be scaled up for use in the Wind Wheel, the building may be finished by 2025.

Yeah, we will all be dreaming about this for the next decade. And yes, the Netherlands could win another batch of green points.

*We originally referred to a Wind Wheel as a windmill, not a wind turbine. Like grist to the mill, windmills are for grinding. Grist regrets the error and has sentenced the author to grinding the grain for an entire stroopwafel by hand.