Has Scott Pruitt had a change of heart about ozone pollution? 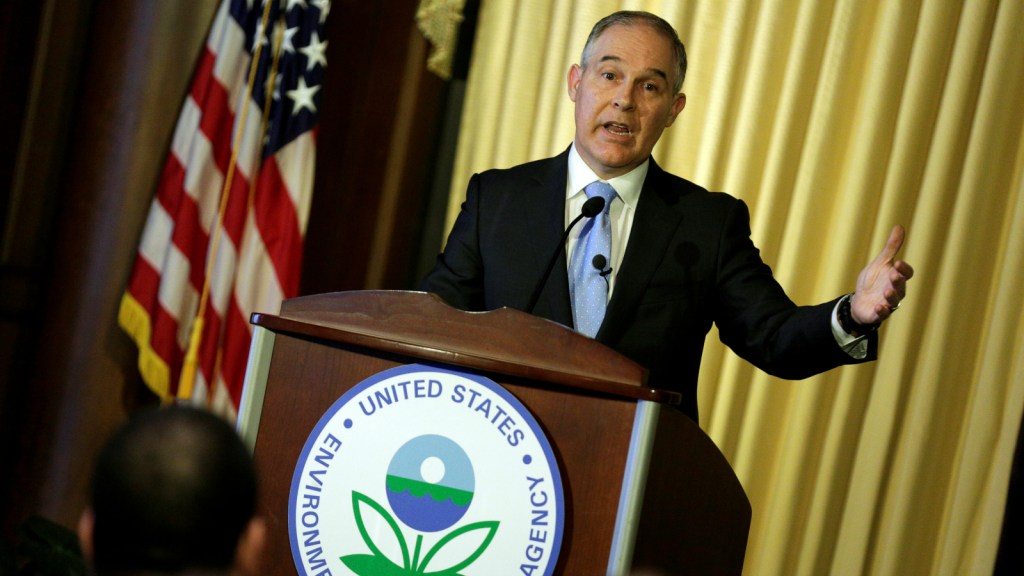 Has Scott Pruitt had a change of heart about ozone pollution?

In an interview with CNN’s Wolf Blitzer last week, the newly confirmed EPA Administrator, Scott Pruitt, announced that, under his leadership, the agency would shift its focus from climate change to other priorities, like “improv[ing] our air quality.” More specifically, Pruitt suggested that addressing greenhouse gas pollution was no more important than “the ozone issue that we deal with in certain parts of the country.”

Pruitt’s right that ozone is a serious problem. But he failed to mention that the EPA already issued a major new limit on ozone pollution back in 2015, when Pruitt was still serving as Oklahoma’s attorney general. Pruitt also left out the part where, rather than praising that new ozone rule, he sued to block it.

Legal challenges to the 2015 ozone standard are, in fact, still pending before the D.C. Circuit Court of Appeals, with oral argument scheduled for next month. So if Pruitt is as committed as he claims to improving air quality, he’ll need to vigorously defend a rule that, only months ago, he sought to scuttle.

What is ozone pollution anyway?

Most people associate ozone with the “hole” in the ozone layer that scientists were worried about a few decades ago. (In case you missed it: The countries of the world got together in 1987 and totally fixed that problem. And then they got together again last year and totally fixed the other problem that they’d inadvertently created by fixing the first problem. EVERYTHING’S FINE NOW.)

You might assume that if a hole in the ozone layer is a bad thing, ozone itself must be a good thing. And you’d be right! Sort of! When ozone is produced naturally, way up in the stratosphere, it shields us from the sun’s harmful UV rays. But ozone also forms down here in the troposphere, as a byproduct of nitrogen oxide pollution from cars, power plants, and other sources. This “ground-level ozone” is the primary ingredient in urban smog, and it can cause or worsen a variety of serious respiratory problems.

What did the Obama administration do about it?

The EPA has, for decades, set “National Ambient Air Quality Standards” that limit the permissible concentration of ozone in the air we breathe. Once a standard is established, states design plans to achieve it by reducing pollution from sources within their respective borders. If a state refuses to design a plan, the EPA can step in to control pollution sources in that state directly.

Under the Clean Air Act, ambient standards must be set at a level that is sufficient to protect public health with an “adequate margin of safety.” And because scientists’ understanding of pollutants’ health effects is continually evolving in response to new studies, the act requires the EPA to revisit and, if necessary, revise its ambient standards every five years to ensure that they remain sufficiently protective of public health. In 2015, the Obama EPA did just that, ratcheting the ozone standard down from the 75-parts-per-billion limit that had been set by the Bush administration in 2008 to a 70-parts-per-billion standard. The EPA expected the new rule to yield substantial health benefits, projecting that, in 2025 alone, it would prevent up to 660 premature deaths, 250 non-fatal heart attacks, and 630 asthma-related emergency room visits.

That’s when Pruitt — plus a bunch of other state attorneys general and industry groups — sued, claiming that the new limit was unnecessarily stringent and impossible for states to achieve. At the same time, a group of environmental and public-health nonprofits filed their own challenge, arguing that the standard was too weak to protect the public health. (Disclosure: Last summer, I coauthored a “friend of the court” brief filed by my employer, the Institute for Policy Integrity at New York University School of Law, in support of the EPA’s standard.)

If Pruitt is serious about reducing ozone pollution, he’ll simply stay the course set by the Obama EPA and allow the Department of Justice to defend the ozone rule at next month’s oral argument. But he may instead try to delay the argument or withdraw the rule from the court’s consideration altogether to give the EPA time to craft a weaker replacement. Even if Pruitt does file such motions, the court may not grant them, and any replacement standard would itself be subject to legal challenge.

In other words, we won’t know the ultimate fate of the ozone rule for a while yet. What will soon be clear, however, is whether Pruitt is willing to put his management decisions where his mouth is. If he doesn’t stand up for the existing rule, we’ll know that his talk about the importance of air quality is, well, just talk.