In 2011, artist Rachel Schragis found herself in Zuccotti Park, the epicenter of the Occupy Wall Street protests. Initially, she was struck by the protesters’ spirit of collaboration. But she was also captivated by the art spilling out of every corner of the park: a puppet of Lady Liberty; the sign-making station with its constant flow of well-cut cardboard, markers, and paint; and the work of illustrators like Nina Montenegro, whose print of a police officer brandishing a night-stick at a dandelion became an emblematic image.

“That was the first time I saw art being concretely useful in making change in the world,” Schragis says.

At her studio in New York City, Schragis creates intricate mind-maps, drawn diagrams that connect words and images with a dizzying array of lines. For Occupy, she drew a complex flowchart that mapped out the connections between the many issues that became part of the movement. 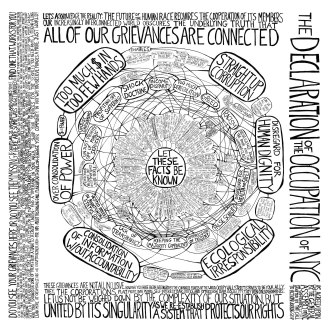 The Occupy flowchart went viral, appearing on website likes Al Jazeera and in books on the movement. (According to Schragis, her work now hangs in the homes of Occupiers clinging to their tear-down-the-system principals). Since then, Schragis has taken on the Fight for $15 campaign and the Divestment movement. 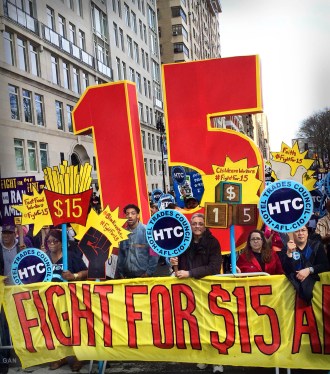 Her most recent work may be her most ambitious. For two years she’s worked on a six-foot long piece modeled on the 2014 People’s Climate March. Entitled Confronting the Climate: A Flowchart of the People’s Climate March, the piece shows the clashing truths and motivations that make up the climate movement, but also insights into the movement’s unity. Schragis, with the help of an ongoing Kickstarter campaign, plans to print thousands of copies of Confronting the Climate and send them around the country to schools, places of worship, and homes. 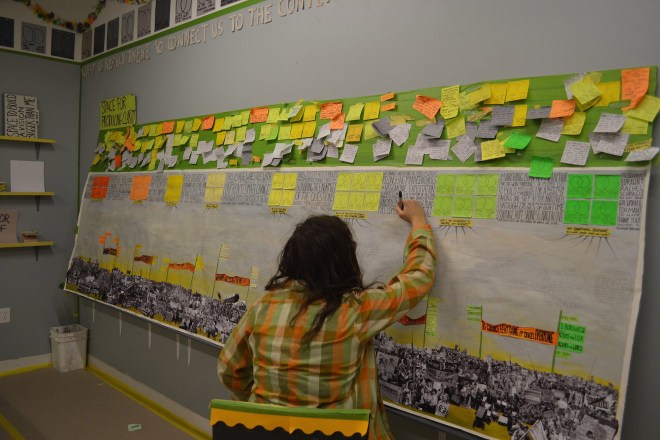 At first glance, Confronting the Climate is daunting: a sepia collage of faces, voices, arrows, and words. But there’s reason. The People’s Climate March, which brought over a hundred thousand people to the streets of New York City, included activists from different religious, indigenous, labor, and environmental groups. And many of those marchers favor different solutions to climate change. Schragis’ work is meant to depict all of them.

“It was important to me to lift up the validity of lots of different opinions and not to pretend that everyone agrees about all of the details,” Schragis says. “People have a lot of fear about climate change and this piece is intentionally big and epic, to say let’s not shy away from that.” 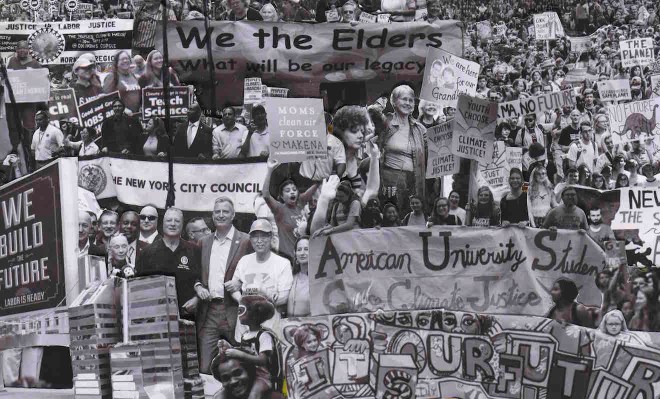 For Schragis, a big part of creating Confronting the Climate was listening to the people she was making art about.

Over the last two years, she conducted interviews with hundreds of organizers to learn more about the varying opinions, ideas, and motivations within the climate movement. The result: snaking ink lines that connect photographs of participants with answers to questions like, “How do we think about human nature?” Yellow Post-it Notes display Venn diagrams with seemingly conflicting truths, an homage to the often overlooked tensions within the climate movement. “That’s a different way of thinking about unity,” Schragis says. “You can see your face in the crowd and know you being there is one tiny piece of a big complicated puzzle.” 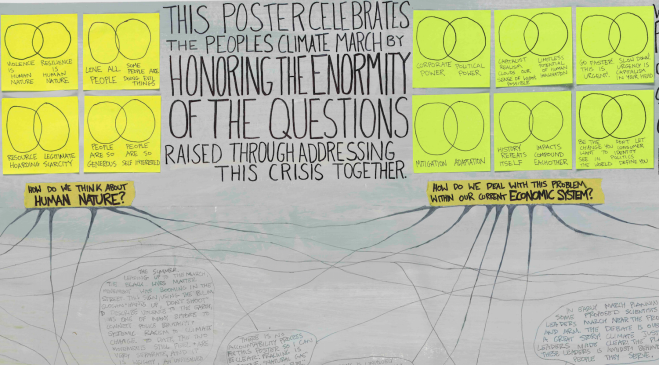 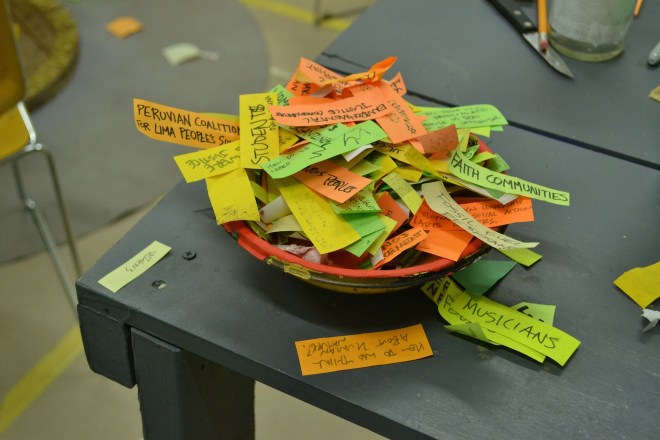 Groups like 350.org — an organization that once commissioned a piece from Schragis — say art plays a central role in their campaigns. “When something feels distant or abstract like climate change, art gives people something to connect with in its immediacy,” says Lindsay Meiman, a communications coordinator at 350. “Our goal in communications, especially around climate change which can seem so daunting, is to get across the emotion as well as the facts behind it.”

Schragis is one of a growing contingent of artists spotlighting climate. The block lettering and whimsical puppets created by David Solnit, 350’s full-time arts organizer, may look familiar to anyone who’s attended a major climate protest. Other artists like Brooklyn’s Swoon and Berlin-based Olafur Eliasson, who both work in public spaces, have also made bold statements on the effects of climate change. 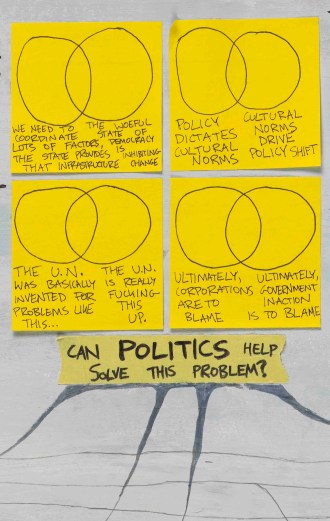 Still, according to Schragis, artistic contributions to a movement can often be seen as decoration rather than visionary. She says successful integration of art and activism will mean work: While movement-builders need to foreground creativity as an essential tool in their efforts, artists also have to step up. “Artists are often not brought into their full potential to be part of change-making,” she says. “Artists need to rise to the occasion of the many crises in the world — interlocking crises of inequality, climate injustice, racial injustice, and economic inequality that we need to be knowledgeable about. We need to demand that we make work about it.”

Until then, artists and activists can take notes from Schragis. She’s even provided the Post-its.

Here’s why it’s so important to buy recycled products