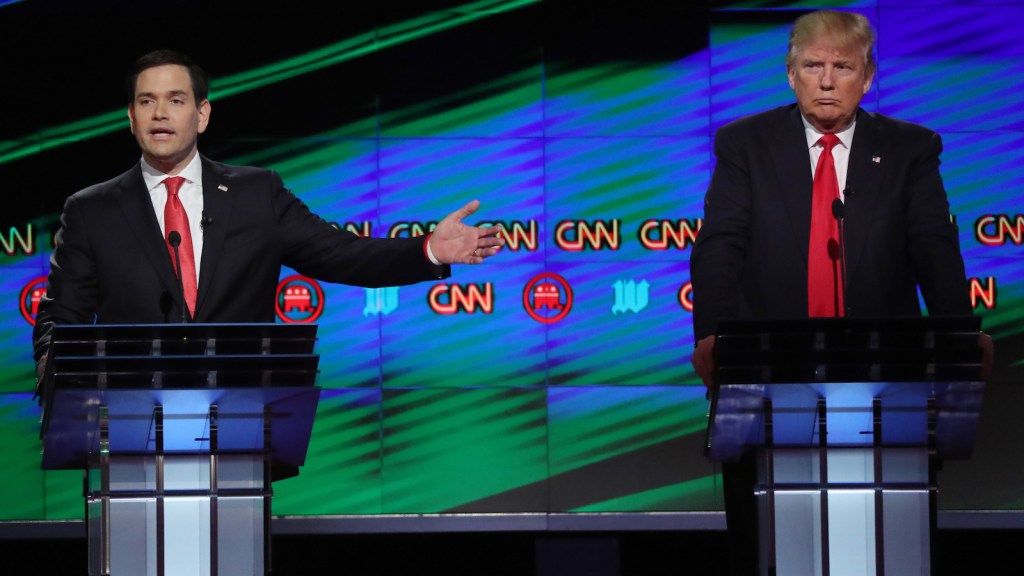 Marco Rubio seemed surprised he was asked about climate change science at a Republican presidential debate held in Miami, where some 2.4 million people are at risk from rising seas. CNN moderator Jake Tapper asked Rubio to respond to the words of Miami Republican Mayor Tomás Regalado, who acknowledges the human-made threat to his city, and wants to hear his state’s senator acknowledge it, too: “Will you, as president, acknowledge the reality of the scientific consensus about climate change and, as president, will you pledge to do something about it?”

Rubio blamed Miami flooding on its low-lying land and listed a convoluted second reason that it’s also “higher sea levels or whatever may be happening.” He continued his fact-free musings by dismissing the Environmental Protection Agency’s efforts to cut our greenhouse gas emissions. “But as far as a law that we can pass in Washington to change the weather, there’s no such thing.” The audience laughed.

Most of the time, reporters and debate moderators will leave it at that and move on to another topic. But Tapper followed up with the key detail Rubio wanted to skip over. “So just to clarify, Senator Rubio,” Tapper said, “Mayor Regalado when he talks about the reality of the scientific consensus about climate change […] he’s saying the scientific consensus is that man does contribute to climate change.” Tapper asked if Rubio would tell the man he’s wrong.

In fewer words, Rubio said, yes he would. “If we pass — if you took the gift list of all of these groups that are asking us to pass these laws and did every single one of them, there would be no change in our environment. Sea level would still rise.” In a world where we really did enact that wishlist, seas would still rise, yes, but the world would be well on its way to a more moderate path of warming.

Ohio Gov. John Kasich answered the same question, saying humans have some impact, but “we don’t know how much humans actually contribute.”

CNN didn’t bother GOP frontrunner Donald Trump for his thoughts on global warming. Though Trump brought it up on his own earlier when talking ISIS.

None of this is even remotely true, but pesky things like facts haven’t stopped any of the GOP candidates yet.