That legacy will follow him long after he’s out of the White House. But many of the rollbacks are unlikely to survive the incoming Democratic administration.

President-elect Joe Biden and Vice President-elect Kamala Harris have vowed to not only restore the Utah monuments, but designate new protected sites to safeguard ecologically important landscapes and combat the global climate crisis.

“As president, Biden will take immediate steps to reverse the Trump administration’s assaults on America’s natural treasures, including by reversing Trump’s attacks on the Arctic National Wildlife Refuge, Bears Ears, and Grand Staircase-Escalante,” reads their comprehensive plan for tribal nations, which the campaign released in October.

The incoming administration’s plan for combating the climate crisis similarly notes that Biden will protect “areas impacted by President Trump’s attack on federal lands and waters,” as well as establish national monuments and parks “that reflect America’s natural heritage.”

Biden campaign spokesperson Matt Hill told HuffPost that “everything we’ve put out there in campaign policies/statements still stands, but we don’t have more details beyond that at this time.”

In late 2017, after a sham review of recent national monument designations, Trump carved more than 2 million acres from the southern Utah sites. The boundary of Bears Ears, a 1.35 million-acre landscape that several tribes consider sacred, was cut by 85 percent. Nearby 1.87 million-acre Grand Staircase-Escalante, the largest land national monument in the country and rich in both archeological and paleontological resources, was cut roughly in half.

The administration has also finalized plans to open the coastal plain of Alaska’s fragile Arctic National Wildlife Refuge, an area that the Indigenous Gwich’in people of northern Alaska and Canada call “the sacred place where life begins,” to oil drilling; green-lighted commercial fishing within Northeast Canyons and Seamounts Marine National Monument, a 4,900-square-mile protected site off the East Coast; and bulldozed and blasted Indigenous cultural and burial sites within Organ Pipe Cactus National Monument, a UNESCO biosphere reserve, to make way for Trump’s wall along the U.S.-Mexico border. 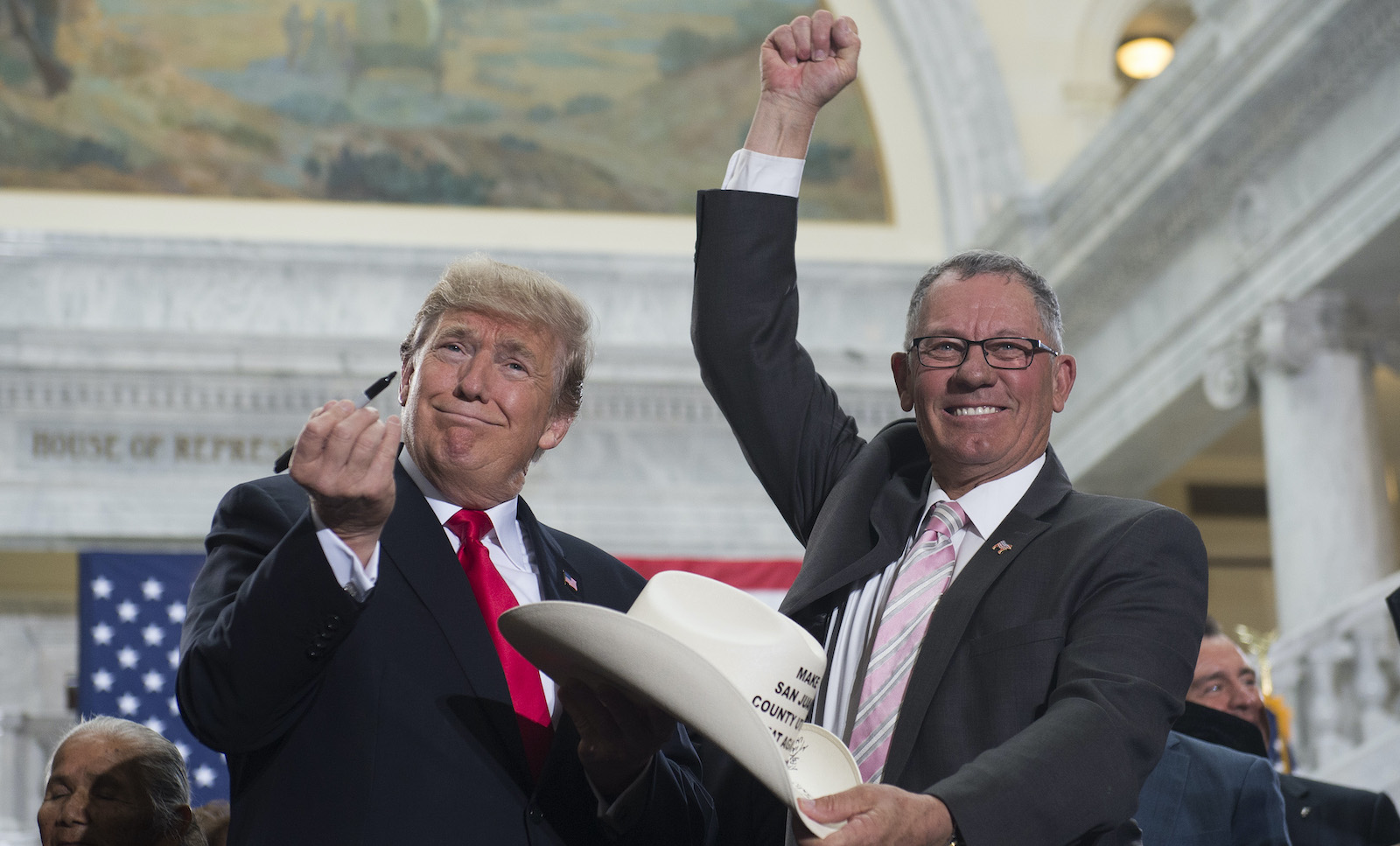 President Donald Trump signs the hat of Bruce Adams, chair of the San Juan County Commission, after signing a proclamation in December 2017 to shrink the size of Bears Ears and Grand Staircase-Escalante national monuments in southern Utah. Saul Loeb / AFP via Getty Images

Upon taking office, the Trump administration prioritized undoing President Barack Obama’s legacy, everything from monument designations to a slew of climate policies aimed at reining in greenhouse gas emissions. The pro-industry, anti-conservation crusade came amid dual climate and extinction crises, as experts around the globe stressed the importance of preserving still-intact ecosystems that sequester carbon and provide refuge for imperiled species.

Former Vice President Biden, who clinched the 2020 presidential victory on November 7, has signaled that he plans to swing back with a frenzy of early executive actions. While rejoining the Paris climate accord and repealing Trump’s travel ban targeting several Muslim-majority nations are expected to be Day 1 priorities, rolling back Trump’s monument rollbacks likely won’t be too far behind.

The Bears Ears Inter-Tribal Coalition, made up of the five Native American tribes that petitioned the Obama administration to grant Bears Ears monument status, has already had intermediary discussions with Biden’s team, according to Keala Carter, the coalition’s public lands specialist.

“All indications seem to point to that we should have great faith in the Biden administration to uphold and build on what the Obama administration did,” she told HuffPost by phone. “It’s evident that Bears Ears in particular really hits at the intersection or some sort of crossroads of racial justice, public lands, and planning for a changing climate — I get the sense that it’s going to be really relevant to the sort of change the Biden administration wants to pursue.”

How quickly the Biden administration might move to restore Bears Ears remains to be seen. More important than speed, Carter said, is a desire among area tribes to see it done in a way that is lasting and legally defensible.

“One of the things in particular we are anticipating is that Biden’s team is going to understand the nuance and be able to think through solutions that might not be as vulnerable,” she said.

The coalition argued it was largely cut out of Trump’s monument review process. Tribes promptly filed a lawsuit challenging Trump’s proclamation in December 2017 shrinking the Bears Ears boundary; the lawsuit was later combined with other legal challenges to the monument rollbacks. Plaintiffs in the cases argue that Congress, not the president, has the sole legal power to shrink, rescind or weaken protections for monuments designated under the Antiquities Act. The U.S. District Court for the District of Columbia has yet to rule in the consolidated lawsuit.

Sixteen presidents have used the Antiquities Act of 1906 to designate 157 monuments. 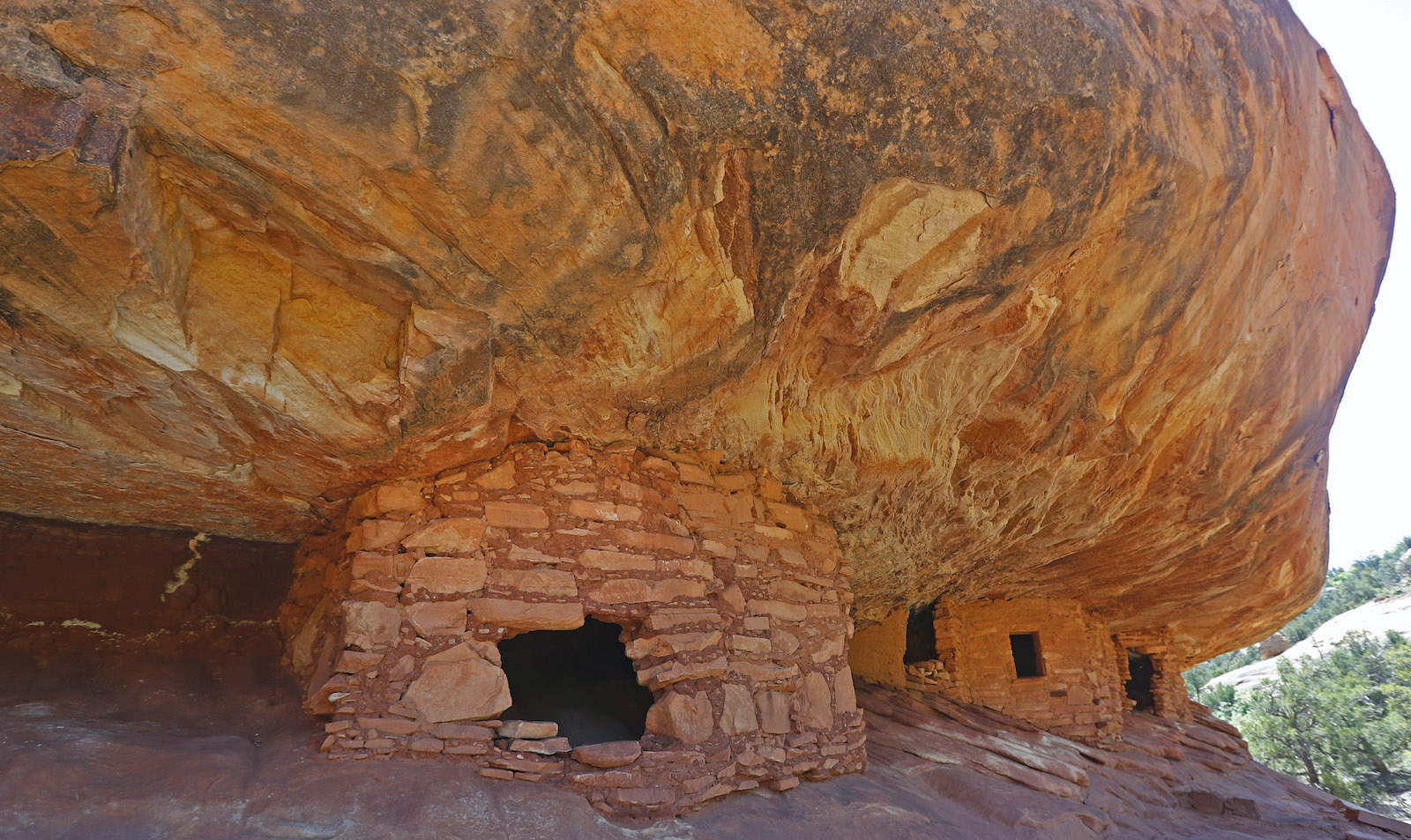 Ancient granaries, part of the House on Fire ruins, are shown here in the South Fork of Mule Canyon in the Bears Ears National Monument on May 12, 2017, outside Blanding, Utah. George Frey / Getty Images

While Trump’s monument review initially threatened more than two dozen sites, Bears Ears was the primary target. Trump called the Obama-era designation an “egregious abuse of federal power” — one that “should never have happened.” What Trump and his team never acknowledged, however, is that Bears Ears included a compromise. Local tribes had petitioned for a 1.9 million-acre monument, much larger than the one designated in 2016, but President Barack Obama opted not to include uranium-rich areas so that Energy Fuels Resources, a local uranium company, had room to expand. Still, Energy Fuels joined other industry groups in lobbying Trump to shrink the monument.

’A direct affront’ to tribes

Biden’s spokesperson did not respond to HuffPost’s question about whether the incoming administration is currently eyeing specific sites for new monuments or other protections. But there is plenty of reason to expect that Biden will implement an aggressive conservation agenda that includes Antiquities Act designations.

Biden has committed to signing an executive order to conserve 30 percent of America’s lands and waters by 2030 — a goal in line with the United Nations’ plan for protecting biodiversity. And the Biden-Harris plan for tribal nations notes that the administration “will work with tribal governments and Congress to protect sacred sites and public lands and waters with high conservation and cultural values,” as well as “provide tribes with a greater role in the care and management of public lands that are of cultural significance to Tribal Nations.”

Senator Tom Udall, a Democrat from New Mexico who is reportedly on the Biden’s shortlist of candidates to lead the Interior Department, told HuffPost in an email Tuesday that Trump’s decision to gut Bears Ears was “illegal” and “a direct affront to the Tribal Nations that built a historic coalition to conserve its cultural landscape.” And he applauded Biden’s commitment to protect America’s natural and cultural heritage.

“Nature provides our life support system — food, shelter, medicine, clean air and water,” Udall said. “The threats to our natural world are in fact threats to humanity. Going forward, we must harness the model of local coalitions coming together to protect our most special and threatened wild places. And we must use science to guide us in preserving high value places that protect the critical biodiversity we all depend on. That’s the vision that will define the Biden-Harris administration.”