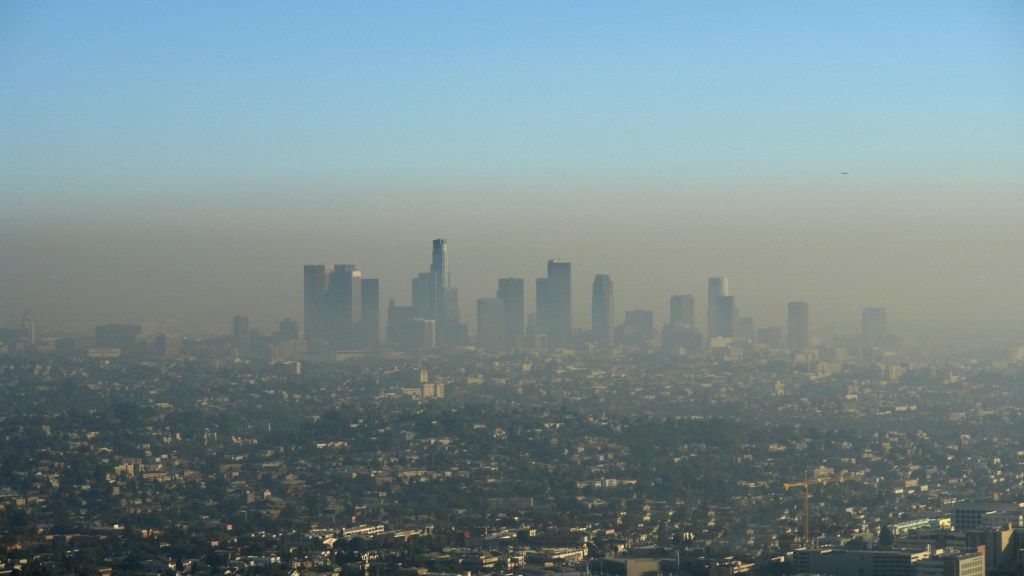 A layer of smog hovers over Los Angeles. iStockphoto
Politics

Los Angeles is the place that first made smog a household word, and year after year, the L.A. region ranks as the smoggiest in the nation. That’s why the region’s air quality watchdog, the South Coast Air Quality Management District, was created 40 years ago.

The agency’s mission  is to make sure the entire region gets the clean air it deserves. But Republicans gained a majority on the district’s board in January — and since then, it has put business interests ahead of tough regulations. On Friday, behind closed doors, the agency consummated its change in direction, firing its tough-on-polluters top executive, Barry Wallerstein.

“We’re in the middle of an air pollution crisis in Southern California,” says Adrian Martinez, a staff attorney with Earthjustice. “This decision is a thinly veiled effort to make the agency less aggressive on large industries like refineries and other important polluting sources.”

Every state and U.S. territory has local agencies that monitor air quality and compliance with national and state emissions standards. The South Coast Air Quality Management District (AQMD) is responsible for a particularly big area: all of Orange County as well as the urban parts of Los Angeles County, Riverside, and San Bernardino Counties, covering  a population of close to 17 million people, or about 40 percent of Californians. But what happens in this district reverberates beyond the Golden State; other states often take their cues on environmental policy from the choices made here.

The AQMD’s work is mission-based: It “believes that all who live or work in this area have a right to breathe clean air.” As such, it’s dedicated to protecting all of us from air pollution with what it calls “sensitivity” to business interests. But the agency’s explicit duty to honor this right is being eroded by a House of Cards-like takeover.

California’s a blue state. Representatives in Washington as well as in the state legislature are overwhelmingly Democrats — and although Republican Arnold Schwarzenegger held office as governor until 2011, he was also pretty progressive when it came to climate change. But Californians don’t get to elect the AQMD’s 13-member board; instead, the seats are appointed by the four counties the board is supposed to protect.

The plan to fill the board with pro-business, conservative Republicans was indirect: state GOP chair Jim Brulte has worked to help elect Republican local officials who would then choose business-friendly members for AQMD’s board.

It has worked. Over the past year, Republicans have been stacking AQMD’s board, ousting Democrats in the process. New members — Larry McCallon, Dwight Robinson, and Janice Rutherford — tipped the majority GOP-ward. Robinson and Rutherford also took over positions previously held by Latinos, leaving the board with  10 white members out of 13. In a region where Latinos are the numeric majority, the board has zero Latino representation, and  only two women*. Brulte has made it clear that he doesn’t even keep track of what’s happening at the AQMD, and is only focused on its partisan makeup.

More than 28,000 businesses in the region operate under AQMD’s permits; the agency deals with oil refineries and power plants (pollution from the region’s vehicles is managed by different agencies). As is often true when it comes to environmental contamination, those stationary pollution sources are more often found in communities of color. While the entire region has to deal with the negative consequences of smog, it’s these communities that most reel from exposure to toxic industries.

In early December, just as the Paris climate talks were kicking off, the AQMD’s board considered a proposal requiring oil refineries and power plants at 56 locations to reduce toxic nitrogen-oxide emissions by 14 tons per day. The AQMD instead approved a weakened version of its own proposal, eliminating an amendment that would have done away with offset credits and lowering the emission-reduction target to 12 tons a day.

Environmentalists were devastated, while the Western States Petroleum Association applauded the decision that it backed. The polluter group said that cutting its emissions by 14 daily tons would have cost $800 million. But short- and long-term health effects and costs associated with living near these facilities are also expensive. In this case, it certainly looks like a  regional board tasked with protecting the right to clean air chose instead to rubberstamp an oil-industry-approved plan.

On Friday, another shoe dropped when the AQMD board fired its director, Barry Wallerstein, on a 7-6 party-line vote. His removal clears the way for new leadership that will almost certainly favor business demands over public health. The region already violates federal air quality standards; aside from increased pollution, a less aggressive AQMD could also trigger federal sanctions.

Neither outcome is something Southern Californians can afford. Nor can the rest of the country afford to deal with the potential spillover, if relaxed AQMD rules become models for other state regulators to adopt. “Other agencies look to the South Coast to adopt important and innovative regulations, and a lot of times those same regulations get transported to other regions,” says Earthjustice’s Martinez.

In recent years, Southern California has managed to begin to turn away from smog and improve overall air quality — even if cleaner air hasn’t fully reached those more vulnerable communities that have big polluters for neighbors. As the AQMD begins to shift from protecting our right to clean air to protecting oil companies, the picture is going to get smoggier fast.

*Correction: An earlier version of this story incorrectly described the make-up of the board.