Will Sanders supporters go over to the Green Party? 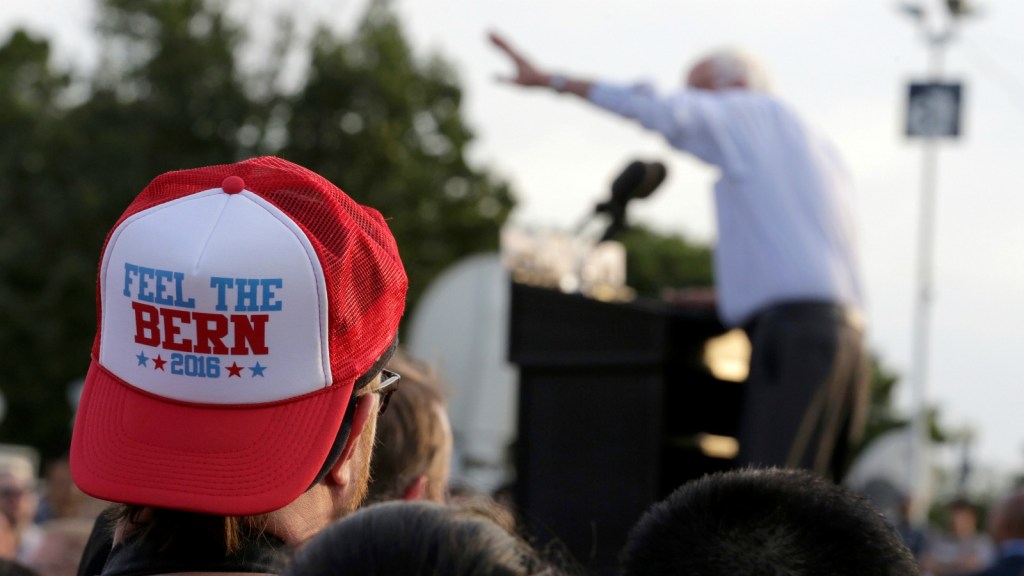 Will Sanders supporters go over to the Green Party?

With Hillary Clinton now the presumptive Democratic nominee and a fresh wave of truly superdelegate endorsements rolling in — including President Obama and also progressive favorite Sen. Elizabeth Warren (D-Mass.) — Bernie Sanders’ backers, who have been some of the most engaged and passionate participants of this campaign cycle, are faced with a decision they’d hoped to avoid.

Their main options appear to be: 1) Continue supporting Sanders in the face of increasing odds and the risk of further splintering the Democratic Party; 2) Decide to support Clinton as the lesser of two evils, with the other, much bigger evil being Republican presidential candidate Donald Trump; 3) Don’t vote, or; 4) Look elsewhere for a lifeline. (Also, maybe leave the country?)

As far as lifelines, there are two main options. There’s the Libertarian Party and its charismatic candidate, former governor of New Mexico, Gary Johnson. One recent Fox News poll shows the party polling at 12 percent nationally. That’s approaching the 15 percent needed to qualify for the presidential debates.

And there’s the Green Party. While the Libertarian Party has been garnering coverage as a “Never Trump” alternative, the Green Party has a harder time getting mainstream media attention when the subject matter isn’t Ralph Nader, the iconoclastic political activist who led the party in 1996 and 2000, and who sometimes gets partially blamed for Al Gore’s failure to win enough electoral votes in the 2000 presidential election. Jill Stein, a former physician and Green Party presidential nominee in 2012, is again the leading candidate to be the Green Party’s nominee this time around, having won 20 of the 21 contests going into the party’s national convention in Houston in August.

Stein has been courting Sanders and his supporters for months. In April, she wrote an open letter to Sanders urging him to consider joining forces. The letter asks that if “in this hour of unprecedented crisis — with human rights, civilization, and life on the planet teetering on the brink — can we explore an historic collaboration to keep building the revolution beyond the reach of corporate party clutches, where the movement can take root and flourish, in the 2016 election and beyond?”

With strong indications that Sanders may soon step aside for Clinton, Stein is pushing the message hard that the Green Party can carry the torch for those feeling the Bern.

We shouldn’t have a “winner-take-all” electoral system where millions of people have no voice because two deadly options lock out choice.

Third parties led the way in the abolition of slavery, the women’s suffrage movements and protections for farmers, workers and consumers.

While Sanders has promised not to run outside of the Democratic party, his followers are free to do as they like. And I wanted to know what they liked. Were they interested in this party known for prioritizing environmentalism? What about a party that pushes for progressive positions across the board, including slashing military spending and cracking down hard on Wall Street? The Green Party platform, it seems, echoes the priorities of Sanders’ supporters in many ways.

With these questions in mind I turned to social media, which did not disappoint. Minutes after soliciting feedback on Twitter, I was contacted by Sean Curtis, a 26-year-old, self-described “classic Bernie Bro” who works at a production company in Los Angeles.

Curtis said that he’ll be voting for Stein and the Green Party, which he also supported in 2008, because Democrats failed to realize Sanders is the stronger candidate.

While Curtis said “disdain for and rebellion against the corrupt two-party system” is what appeals to him most about the Green Party, he also said environmental issues play a central role. He said Clinton’s support for global fracking and offshore drilling, as well as the Clinton Foundation’s contributions from ExxonMobil and ConocoPhillips, “make her environmental protection claims questionable at best, downright lies at worst.”

Curtis politely apologized for any ranting he may have been doing, and his views are admittedly far left of the mainstream (he didn’t vote in 2012 because he doesn’t feel that Obama is anything more than an establishment Democrat). However, his response to the huge question of possibly contributing to Donald Trump’s election by not voting for Clinton was reflective of other responses I received.

“As long as Hillary Clinton is the nominee, I will not be voting Democrat,” he said. “And I will not be guilted into it by that fear-mongering plea ‘but you’ll let Trump win!’ … I have never and will never sacrifice my values for the lesser of two evils.”

On Facebook, Brooks Saucedo-McQuade, a high school friend who lives in Albuquerque, N.M., told me that after working to support Sanders in New Mexico he would in all likelihood support Stein over Clinton. Like Curtis, he feels no loyalty to the Democratic Party and was only supporting it as long as “there was a chance Sanders could use it as a vehicle to the White House.”

Saucedo-McQuade thinks that the two party system is “detrimental to representative democracy” and that it’s “delivering exactly the opposite of what we need, whether it’s infrastructure, health care, foreign policy, or education.”

As for the problem of Trump, he said of course Clinton would be preferable, but that’s not enough to necessarily earn his vote.

Come November though, if his conscience tells him to vote for Clinton to prevent Trump from winning a close race, he’s open to that. He’s also considering not voting at all. But right now he’s likely to vote for the Green Party and environmental issues are a big part of that reasoning.

“Sanders is the only national politician currently in office who is sounding the alarm on climate change,” he said. “I believe Clinton is sincerely concerned about it, but will approach it in a terribly conventional, bureaucratic manner that will spell catastrophe not only for our grandchildren but for us.”

Stein’s climate policy sounds much more to Saucedo-McQuade’s liking than anything conventional. In what she refers to as the “Power to the People” plan on her website, she calls for enacting an “emergency Green New Deal” that will “initiate a WWII-scale national mobilization to halt climate change, the greatest threat to humanity in our history.”

This includes transitioning to 100 percent clean renewable energy by 2030, and investing heavily in things like public transit, sustainable agriculture, and conservation. While the implementation scale and timeline of these ideas is highly ambitious, there’s nothing exceptionally revolutionary about them. That’s the thing about climate change: We have the resources to act now, all that’s required is the will.

I posed the same question I’d asked on Twitter and Facebook — are Bernie supporters considering pivoting to the Green Party? — on a Reddit thread in the environment subreddit. The conversation mostly steered back to the question of whether risking a Trump presidency is worth it.

Galvana said she understands the pragmatism of that argument, but that if “the vast majority of voters continue to vote for the lesser of two evils, then that will be our only choice in perpetuity. I do not accept that, and if enough ‘pragmatic’ voters did not accept it, maybe things would change.”

Several people noted how if you’re in a deep blue state that will already be going to Clinton, or a deep red state where she has no chance, then voting for a third-party candidate like Stein makes more sense for those conflicted by the Trump conundrum. However, this still smacks of the type of pragmatism that people like Curtis, Saucedo-McQuade, and Galvana side-eye with heavy skepticism.

Thereisaway said she’ll be voting for Stein because Trump and Clinton are both deniers.

Stein agrees with the notion that Clinton and Trump are similar in more ways than people often perceive.

During a recent interview with Democracy Now!, she said “you know, Trump says very scary things — deporting immigrants, massive militarism and, you know, ignoring the climate. Well, Hillary, unfortunately, has a track record for doing all of those things”:

So I’d say, don’t be a victim of this propaganda campaign, which is being waged by people who exercise selective amnesia. They’re very quick to tell you about the terrible things that the Republicans did, but they’re very quick to forget the equally terrible things that have happened under a Democratic White House, with two Democratic houses of Congress. It’s time to forget the lesser evil, stand up, and fight for the greater good. We are the ones we’ve been waiting for.