We know and love sea lions for their soulful eyes and playful antics — they’re basically the golden retrievers of the ocean. But recently, sea lions have been making headlines for much sadder reasons: Droves of malnourished sea lion pups have been washing up all over the Southern Californian coast. More than 1,450 pups have stranded without their mothers since January, reported the Washington Post.

Warmer waters off the coast of California are likely driving away sea lions’ prey such as squid, anchovies, and sardines, said Justin Viezbicke, stranding services coordinator for the National Oceanic and Atmospheric Administration (NOAA). As a result, mother sea lions are having to go further from birthing grounds — usually around the Channel Islands — to forage for food, meaning that pups probably don’t get enough nutrients from their mothers when they return. The pups then wean off their mothers earlier and are underweight when they leave the island, likely to find food of their own.

“They’re leaving with a low tank of gas and there’s really not much out there to help them out,” said Viezbicke. “They’re jumping into … a challenging environment and then they’re ending up washing ashore on the mainland, starving.”

Organizations like NOAA and other animal rescue programs have been taking in pups and feeding them — but that’s only a stopgap measure.

“This is something that’s naturally occurring out there, so there’s really not much we can do other than watch and learn from the situation,” Viezbicke said. “We can’t really prevent or stop it, unfortunately.”

Left to their own devices, these stranded sea lion pups probably wouldn’t make it. (No judgement if you need a tissue here. I’ll wait.) 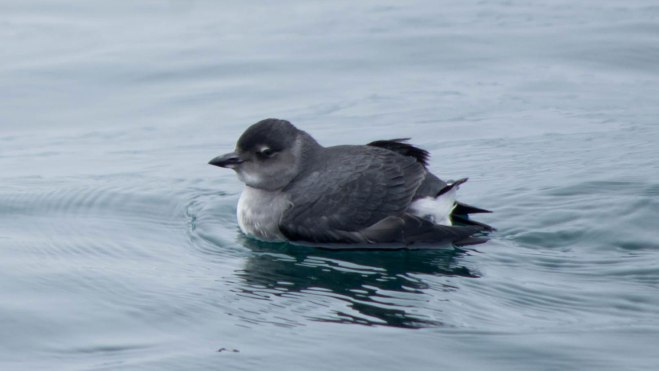 As sad as it sounds, starvation events and mass mortality events (in which vast numbers of animals die), are becoming more and more common in this wacky, warming world. Thanks to a number of large-scale, systemic alterations (lookin’ at you, El Niño and warming ocean temps), the world’s ecosystems hang in a delicate balance.

Meet the Cassin auklet — a pudgy, fist-sized seabird with crescent-shaped eye markings and pale blue feet. They’re pretty dang cute. And thousands of them are washing up dead along the West Coast — all the way from Northern California to British Columbia.

“My volunteers alone … have found 7,000 carcasses [over the last four months],” said Julia Parrish, executive director of the Coastal Observation and Seabird Survey Team (COASST) at the University of Washington. “It’s a scary big number.”

Like the sea lions, auklets are literally dying for a meal. The birds primarily feed on zooplankton or krill. However, in the last year, a mass of warm water — very scientifically named “the blob” — drove the usual Pacific krill into deeper waters and brought in a host of zooplankton that the auklets don’t eat, reported Audubon Magazine.

When a high number of birds wash ashore dead, the events are called “wrecks.” Generally speaking, smaller wrecks are fairly normal, Parrish explained. If there’s a storm out at sea, it’s not unusual for seabirds caught in its path to die, whether from starvation or storm conditions, and later wash up on beaches. That’s just how it goes.

But this time, something is different. “This is the biggest wreck we’ve ever seen in the 16 years we’ve been doing this work,” Parrish said. “I think it’s probably the largest wreck we’ve seen on West Coast … That makes me sit up and take notice.”

This winter’s wreck could be especially bad if enough of the dead auklets turn out to be adults, because an entire reproductive group may have been wiped out. They won’t know for sure until the birds return to their breeding grounds. Until then, it’s a lot of waiting and counting dead birds. 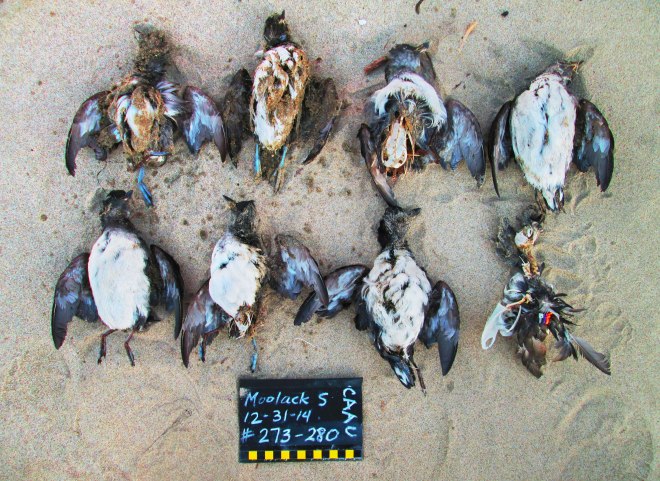 So is this climate change at play? Scientists are hesitant to say.

Dee Boersma, a conservation scientist and founder of the Penguin Sentinels Project at UW, compares the vulnerability of seabirds to weather and climate to the vulnerability of a human crossing a busy street: You could get hit by a truck, but it doesn’t happen every time. And just as it’s hard to predict exactly how likely you are to survive a street-crossing as a human, the same goes for storms and their effects on Magellanic penguins, she said.

In 2014, Boersma and other penguin researchers published a study in PLOS ONE which found that climate change was directly responsible for the deaths of more than 200 Magellanic penguin chicks from 1983 to 2010 in Punta Tombo, Argentina. There, climate change is increasing the intensity and frequency of storms, while lowering the reproductive success of Magellanic penguins, the study reported.

During the 27-year-long study, young penguins perished at a high rate due to a combination of starvation and overexposure during exceptionally rainy and hot seasons. The chicks’ feather coats keep them cozy when they are dry, but that changes when they get wet: The fluffy down isn’t waterproof, like adult penguin feathers. So if a penguin chick gets caught in the rain during a storm, it’s like a human “being stuck outside and naked in a wet sleeping bag … the penguins basically die of hypothermia like you or I would,” said Boersma.

Plus, a lack of food leaves the chicks unprepared to cool themselves down when things heat up, since they rely on the food their parents bring them for all of their water. Without adequate hydration, the chicks can’t depend on evaporation to keep cool and become vulnerable to heat stress.

It’s a lethal combination: Over the course of the study, an average of 65 percent of the Punta Tombo chicks died every year, with about 40 percent dying of starvation. 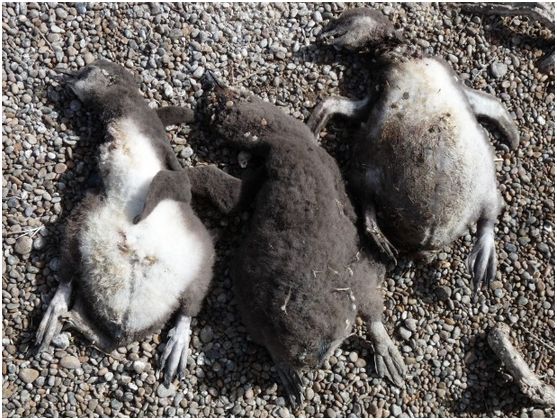 Chicks that died of hypothermia after a rainstorm.Dee Boersma / University of Washington

So what was that about climate change again? Mass animal die-offs and starvation epidemics are shocking no matter what, even to hardened scientists. Climate change is just exacerbating these kinds of things.

“The fact is that we have populations responding to warming events, whether the warming is temporary or inexorable,” said Parrish, the researcher studying the dying auks.

The world’s ecosystems are hanging on as best they can, but small things can throw them out of balance. It’s unfair to compare the temperatures that a wild ecosystem can withstand to the temperatures humans can, because we have tools and technology on our side. “Wildlife needs habitat,” Parrish said. “In today’s crowded world, habitat only exists in certain places — places that we protect. And when the climate warms, those places change.”

“[Even one degree] is a huge deal,” Parrish points out. To understand and support conservation efforts, humans need to “think like a fish, a clam, or an oyster, and not like a person.”

Guess it’s time to get in touch with your inner oyster or auklet — getting hungry yet?

7 ways to talk about climate impacts with just about anyone (yes, even Republicans!)