The Corps of the Matter: On the Army Corps and the Mississippi River Archives - Grist

It’s spring, and for most of us that means tackling a few home improvement projects: cleaning the gutters, say, or replacing storm windows with screens.

The Mississippi Valley Division of the U.S. Army Corps of Engineers is responsible for maintaining the Mississippi as a useful and navigable waterway. But some of the Corps’ projects have critics crying “pork.” Click the map below to find out more. But what if you took that to-do list and magnified it by millions of acres, billions of dollars, and reliable bursts of outrage from the neighbors? Why, then you’d be the U.S. Army Corps of Engineers.

This spring, we take a look at what the nation’s legendarily industrious, controversial, and misunderstood agency is up to along the Mississippi River — and what its presence there has meant for both residents and natural resources over the last 200 years.

How well is the Army Corps spending your tax dollars? Do the locks and levees the corps builds help or harm the river? Do the agency’s plans for flood- and hurricane-prone areas leave low-income residents with nowhere to go? And why was the Corps created in the first place? (Hint: It had more to do with the Statue of Liberty than with steamboats.)

Over the next few days, we’ll explore these and other questions. From a look back at the Army Corps’ creation to a look ahead at how it’s planning to confront climate change, we’ll bring you up close and personal with the busiest beaver in America’s waterways.

Today, it’s almost impossible to say “Army Corps of Engineers” without also saying “Hurricane Katrina” and “levee failure,” or “Yazoo Pump” and “boondoggle.” But the corps’ original mandate made no mention of hurricane and flood protection, or even of the …

Journalist Michael Grunwald on the hubris of the Army Corps

Dam, that’s a pretty lock: the sun sets behind the Corps navigation structure at Alton, Ill. Photo: Mark Hirsch Imagine the Pentagon had been caught red-handed concocting its justification before launching the invasion of Iraq in 2003. Imagine that after …
Cities

Fifteen years after the Great Flood of 1993, floodplain development is booming

Once it was a cornfield; now it’s a Wal-Mart, a Taco Bell, a Target. Here along a stretch of Missouri’s Highway 40, in the Chesterfield Valley area just west of downtown St. Louis, what’s said to be the largest strip …

No one wants to see this again — but can post-Katrina protection efforts keep the Big Easy safe? Photo: NOAA Here’s the good news: The Army Corps of Engineers is “racing” to complete a comprehensive levee system for metropolitan New … 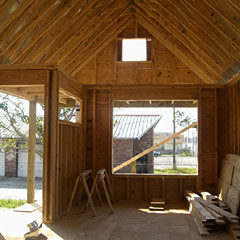 When Hurricane Katrina made landfall in Mississippi on August 29, 2005, the storm’s 125-mile-an-hour winds and 25-foot wall of seawater ground homes, boats, and businesses into matchsticks across the state’s three coastal counties: Jackson, Hancock, and Harrison. The cities of …
Cities

There are 8 million stories in the Mississippi Basin, and this week we’ve told only a few. As lead editor of this Army Corps series, I’ve been immersed for the last few months in all things Mississippi River. Coming out …