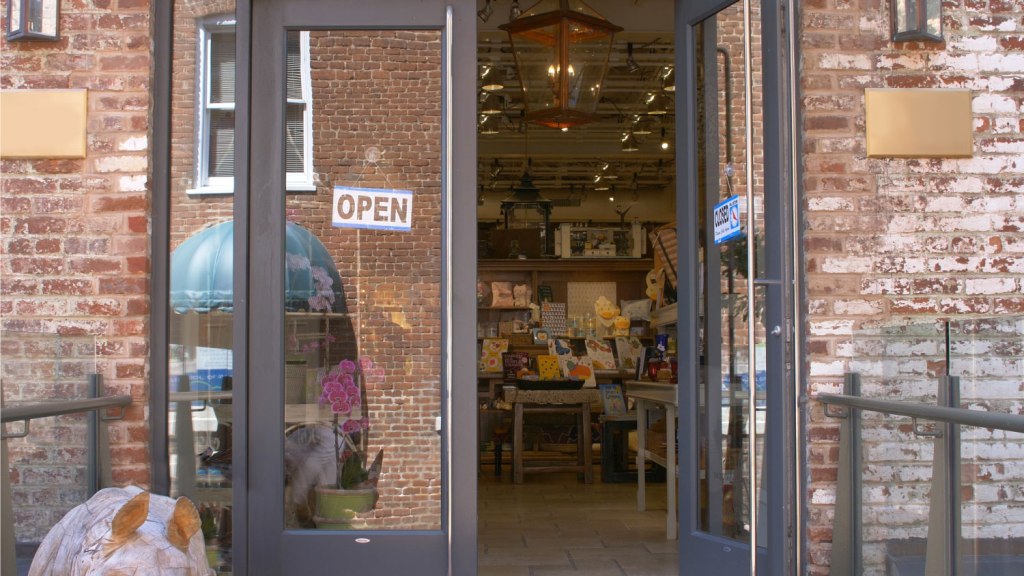 With back-to-school shopping season starting up this summer, we invite you, dear consumer, to step back from the dazzling world of reclaimed wood pencils and vinyl-free rolling backpacks for a moment. On your quest for a new pair of fair-trade sneaks, how many shops and restaurants can you spot with their air conditioning blasting and their doors and windows open wide?

Sustainability may be a hot commodity in the business world, but many retailers continue to blast their air conditioning with the hope that a stream of cool air projected onto city sidewalks will lure sticky customers inside. Not only is there little data available to support the idea that an open-door, A/C-pumping approach does much to increase sales, but literal tons of greenhouse gases end up in the atmosphere as a result. Positively chilling!

Throughout the course of a summer, an average store can waste upwards of 4,200 kWh of electricity — releasing a whopping 2.2 tons of carbon dioxide into the atmosphere — simply by leaving the air conditioning on while windows and doors are open, according to New York-based energy giant Con Edison. (That’s about the same amount of pollution emitted by a diesel semi driving from New York to Miami, by the way.) Such a practice also increases the risk of widespread brownouts or blackouts when summer scorchers start to overtax a city’s power grid.

In New York City alone, air conditioning in commercial spaces accounts for about 10 to 20 percent of all of the energy used in the Big Apple and up to 10 million metric tons of greenhouse gas emissions released each year. If all 10,000 of the city’s businesses shuttered their windows and doors when running the A/C, they could save about 22,000 extra tons of carbon dioxide emissions.

In the summer of 2015, with the help of more than 200 volunteers throughout five boroughs, New York City’s Department of Consumer Affairs launched the “Shut the Front Door!” social media campaign to help combat the issue. The campaign took to the streets and to social media to educate business on the environmental and financial impacts of their energy use.

Shut the Front Door also sought to strengthen a 2008 law requiring chain stores with five or more locations and retail businesses upwards of 4,000 square feet throughout New York City to keep their doors closed. By fall 2015, the New York City Council updated the law to require all businesses, no matter their size, to abide by it. The change fits with Mayor Bill de Blasio’s ultimate plan to reduce carbon emissions 40 percent by 2030, then all the way to 80 percent by 2050.

While New York City is ahead of the curve in mandating that retailers close their doors and not waste A/C, stores around the country are propping open their doors to lure in customers during the hottest and second busiest shopping time of the year.

Clean-energy nonprofit Generation 180 has created Keep it Cool, a campaign that enables environmentally conscious consumers to remind retailers to close their doors without the awkwardness of having to ask a store manager in person to turn their air conditioning down. Using Facebook Messenger, concerned shoppers can send store locations to Generation 180. Generation 180 then sends a supportive note to air-conditioned establishments with closed doors, while stores with their windows and doors open are encouraged to be less wasteful in the future. The organization also puts the stores on a national map, which is updated daily as new retailers commit to the cause.

“That’s the beauty of Keep it Cool,” says Susan Klees, Campaign Director for Generation 180, a Virginia-based nonprofit seeking to educate, mobilize, and empower consumers to advocate for cleaner energy choices. “Not only does it educate individuals about the pollution generated by stores keeping their doors open, but we’ve also created a campaign that we hope will inspire people to act.”

Consumers can also play an especially powerful role when it comes to the push to transition to green energy, says Klees. A lot of misconceptions around clean energy still persist, she says, leaving many unsure how they can make an individual difference. Many people are still unaware, for instance, that the cost of producing clean energy (like solar power) has dramatically decreased over the years, becoming a much more commercially viable option for businesses and residences throughout most of the country.

Ours is the first generation with real choices in how we power our lives. Generation 180 is a nonprofit committed to advancing the transition to clean energy and supporting a cultural shift in energy awareness through engaging content, digitally enabled campaigns, and an empowered volunteer network. You can make a difference in reducing pollution in your own community by participating in Keep It Cool.