I’m sure Steve Mufson and Juliet Eilperin didn’t choose the headline, but whoever did, I think it’s a real mistake to refer to the Kerry-Boxer bill as “a bit more ambitious” than its Waxman-Markey counterpart in the House. This became conventional wisdom almost immediately, but it seems to me both wrong and pernicious — the more Kerry-Boxer is seen as a leftward move from the House bill, the more senators who want to be seen as moderate will want to be seen hacking it down.

There is one way in which Kerry’s bill is unambiguously stronger: it retains EPA authority to regulate greenhouse gases under the New Source Review provisions of the Clean Air Act. That’s a big deal — a red line, analogous to the public option in health care reform, for many progressive groups — but it’s basically orthogonal to the bill’s substance. (It will not survive the process, I fear, though the public option look like it might surprise us, so who knows.)

The typically cited basis for claiming Kerry’s bill is stronger is the fact that the 2020 emissions target went up to 20% from 17%. But:

So, the change in the 2020 target is far less significant than it appears. Offsetting that modest improvement is more than three times the subsidies for “clean coal,” more handouts for nuclear and natural gas, and more handouts to Big Ag.

Most importantly, though the significant differences are not in the cap-and-trade portion of the bill but in the energy portion. The bill already passed by the Senate Energy Committee — the American Clean Energy Leadership Act, or ACELA — is considerably weaker than the analogous portions of the Waxman-Markey bill. The Renewable Electricity Standard is reduced from the already-weak 20% by 2020 to just 15%. It establishes a woefully flawed Clean Energy Deployment Administration. It would enable offshore drilling. And its efficiency provisions are weaker.

As the EPA says in its analysis (PDF), “EPA expects the impacts (e.g., changes in energy demand and prices) of energy efficiency provisions in S. 1733 to be approximately half those estimated in our analysis of H.R. 2454.” Recall two things: one, mainstream economic analysis tends to dramatically understate the value of efficiency; losing half of the efficiency gains in Waxman-Markey is a bigger deal than EPA makes out.

And two, complementary measures — mostly efficiency — were expected to generate a huge amount of emission reductions in 2020, as the World Resources Institute illustrates [SEE UPDATE BELOW]: 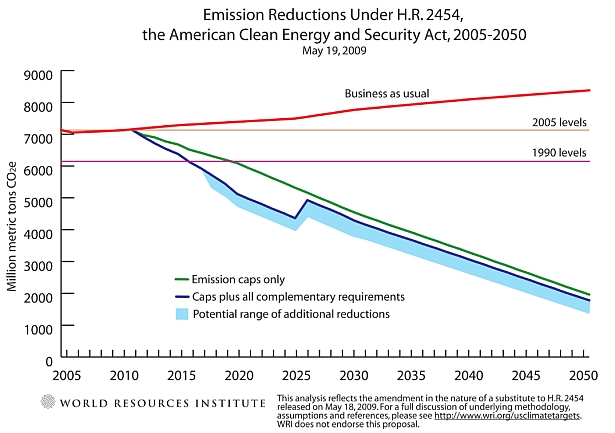 Losing half those efficiency gains, while it may not show up in the official targets, substantially blunts the bill’s impact.

So it’s time to stop saying the Kerry-Boxer bill is more ambitious than Waxman-Markey. It gives more favors away to more interest groups — so I suppose you could say it’s more politically ambitious. But in terms of the measures meant to drive reliable, cost-effective action in the short-term, the Senate bill is a step backwards.

UPDATE: This post contains two serious errors, for which I have no excuse, unless you think writing at 2am with a head cold is an excuse.

First, I say above that methane emissions were moved out from under the cap, and are now eligible as offsets. That’s half right. They weren’t under the cap in Waxman-Markey, but they were subject to mandatory regulations. Under Kerry-Boxer, those regulations are gone, at least until 2020; reductions from methane will be voluntary and eligible as offsets. That still means fewer total emission reductions by 2020, though the difference is not in capped sectors, but in uncapped sectors.

So: the weaker efficiency provisions in ACELA would increase the cost of achieving reductions in capped sectors, but would not increase the amount of emission reductions.

Anyway, apologies for the errors, and thanks to Brad for the catch.