Solar power nerds are fond of an estimate that 100 square miles of Nevada desert — filled with solar panels — could provide enough electricity for the entire United States. But right now, solar supplies just 1 percent of the country’s energy. Cost is one reason that figure is so low. Unless you’re an independently wealthy solar hobbyist, chances are you can’t afford the $30,000 or so it takes to install panels at home.  That’s why Gary Nystedt, as resource manager for Ellensburg, came up with a way to bring solar power to all the people in this smallish city in eastern Washington State. The city asked its residents to pitch in what they could — the minimum contribution was $250 — and built the country’s first community solar project, or “solar garden,” in 2006. Ellensburg now pumps an average of 102,000 kilowatt-hours of solar power into its grid each year. That’s enough to completely power about 10 average U.S. homes.

Ellensburg, population 15,000, lies just east of the Cascade Range. Unlike drizzly Seattle, 93 miles to the west, the sun-drenched town gets more than 300 days of rays a year. (But note: Solar power can work anywhere the sun shines.) Residents would often call the city, wanting to know how to install solar panels. “But there was always a problem,” says Nystedt. “It was too expensive, or the wife didn’t want ugly panels on the house, or there was too much shade from trees.”

Brainstorming with colleagues at a solar conference in 2003, Nystedt came up with an innovative solution — a city-owned solar installation that could feed right into the city’s grid, but would be financed like a cooperative, open to anyone who wanted to invest. The city council liked the idea, but wanted pledges of at least $53,000 from residents before moving forward. Nystedt put the word out, and got $103,000 in response.

Ellensburg already owned a sunny spot of land next to a major highway, which had the added advantage of advertising the awesomeness of solar power to 15,000 drivers every day. The two-acre site is now home to 10 huge solar arrays and there are plans to add six more arrays, 10 concentrating solar collectors (which look like TV satellite dishes), and eight small wind turbines.

“The thing I love is that it requires almost no maintenance,” says Nystedt, who goes out on rainy days with his scrub brushes to clean dirt and bird poop off the panels. “There are no moving parts, other than electrons. You build them and they just sit out there and generate energy.”

Gary NystedtGary Nystedt, 58, is a 20-year Ellensburg resident who originally hails from Nebraska. His vision brought the solar project to life, but he’s just as passionate about other forms of clean energy — including not using energy in the first place. As resource manager for the city, he also oversees Ellensburg’s conservation programs, such as home weatherization. His interest in solar energy dates back to his days in architecture school in the late ‘70s, when he studied passive solar design.

Recent law school graduate Gary Shaver was working as a consultant for the state energy program when he was called in to help Ellensburg plan its solar system. Since Ellensburg was the first-ever community solar project, Shaver was flying blind. “There were no models to follow, no incentives, really, to speak of,” he says. “It was very much uncharted territory.” (See related Q&A with Gary Shaver.)

Stanley DudleyStanley Dudley, 91, is one of the city’s 90 resident investors whose donations fund the project. As a retired engineering professor, he likes the idea of clean energy, but would rather come visit solar panels in the park than install them at home. His house is too far away to get any electricity generated by the solar park, but he doesn’t mind. “My panel sends electricity into the grid. What do I care if I don’t get the electricity?” he says. “Somebody gets it. It’s the same environmental benefit.”

Walt Kaminski, before he passed away in 2004, brought the local university on board, which turned out to be an invaluable source of free labor. As dean of the Department of Engineering Technology at Central Washington University, based just a few miles away from the solar site, Kaminski got students to write grants, design the adjustable racks that hold up the solar panels, and create the project’s logo — the letters ESC for Ellensburg Solar Community, with rays of sun shooting out from the curve of the C.

In the years since Ellensburg’s project stirred its first few electrons, the arrays have generated more than 217,000 kilowatt-hours of energy — enough to power 4,800 homes for one day, and keep more than 304,000 pounds of greenhouse gasses out of the atmosphere.

The project launched with 120, 300-watt photovoltaic panels, the sparkly, blue-tinted panels composed of semiconductors (in this case, crystals) that convert sunshine directly into electricity. The second phase added more panels and 21.6 more kilowatts of energy in 2009.  The third phase, underway now, will diversify the project, adding more panels, as well as solar concentrators and small wind turbines, all for an additional 24 kilowatts.

Still, Nystedt concedes that the solar panels contribute just a “tiny speck” of the city’s overall power needs — 0.05 percent, to be exact — the rest of which Ellensburg purchases from the Bonneville Power Administration. The BPA operates several hydropower dams along the Columbia River and one nuclear power plant about 80 miles away.

Only the 25 homes closest to the solar arrays are actually getting the energy generated there. (All solar power gets channeled into the grid through the nearest transformer, which only serves a certain part of the city.) But 90 of the town’s 9,000 homes are investing in the project. “If you extrapolate that percentage out to a big city, like Seattle, that could be significant,” Nystedt says.

Ellensburg pays roughly $6,100, total, back to its citizen investors each year. The amount per person depends on how much they invested. For example, if someone’s contribution was one percent of the total cost, they get a credit for the value of one percent of the total energy produced by the solar park. In a quarter when the solar park generated 13,000 kilowatts of energy, the individual credit would be $6.55. (The value for each kilowatt-hour is based on BPA’s wholesale rate.) The credit continues for 20 years.

“Pretty much all of our initial investors were doing it because it’s the right thing to do,” Nystedt says. “The more we promote, and design, and manufacture [solar energy] the more the price will come down.”

City officials have hosted curious guests from at least a dozen states and two countries (South Korea and Ghana). The success of Ellensburg’s project was instrumental in recent passage of landmark state legislation that provides tax incentives to community solar investors, homes and businesses that produce renewable energy, and manufacturers of renewable energy components such as solar panels or wind turbines.

In the years since Ellensburg figured out how to make solar power affordable, other communities have followed suit. Though inspired by the Ellensburg approach, each city has made slight modifications to the plan. For example, in Sacramento, Calif., residents subscribe to the one-megawatt Solar Shares program for a year at a time, rather than owning shares, which allows for a shorter commitment. A grass-roots group on Bainbridge Island, west of Seattle, built a community-funded solar installation on the roof of Sakai Intermediate School, channeling the resulting energy to the school. St. George, Utah, has a program similar to Ellensburg’s, in which residents invest in a 100-kilowatt project called SunSmart. The Utah project went online in January 2009.

It all goes to show, says Nystedt, that a community solar power project is possible anywhere there are passionate advocates of renewable energy, a forward-thinking utility company, and people who want to buy in. “Germany is the largest user of solar power in the world,” he says. “And their weather is less sunny than Seattle.”

How a city got real about solar energy

Photo courtesy of Gary ShaverWhen the city of Ellensburg asked the Washington State University energy program for help designing a community solar project, the state folks weren’t sure the city folks were serious. At the time, just a few years … 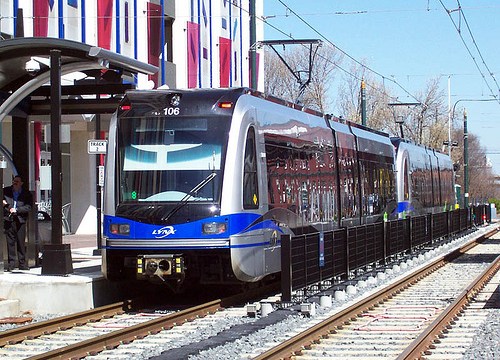 Charlotte is car-loving NASCAR country, a vast suburbia of cul-de-sacs and strip malls. Yet its new light rail line is a national model for success, outstripping ridership projections and inspiring millions of dollars in high-density development. How did sensible transportation …
See all articles in this series