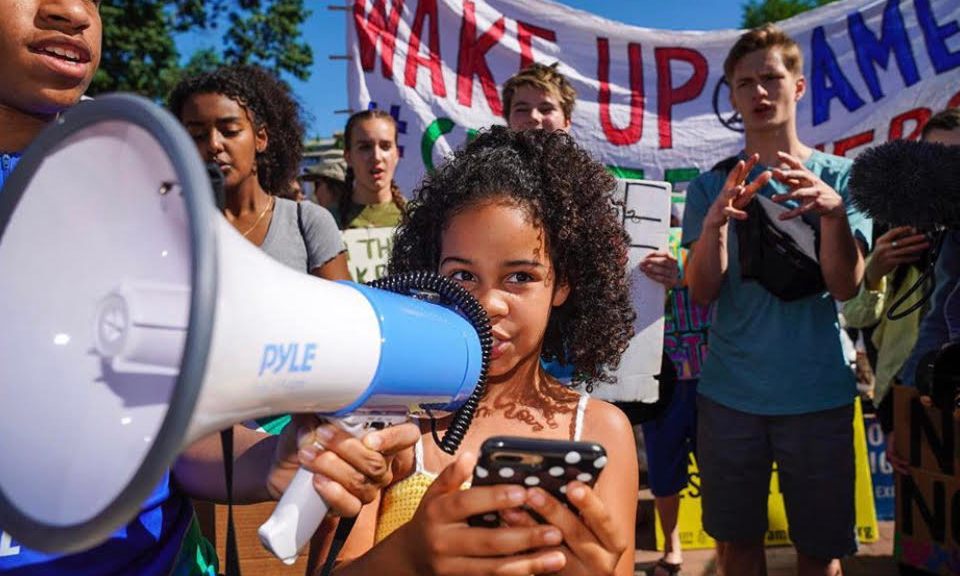 Havana Chapman-Edwards is an 8-year-old U.S. diplomat and a passionate community organizer, philanthropist, public speaker, and humanitarian as well as an author, actor, and model.

This column is adapted from a speech that Chapman-Edwards gave during a sit-in organized by the Sunrise Movement at the Washington, D.C., headquarters of the Democratic National Committee. While several TV networks plan to hold town hall-style events to discuss climate change with 2020 presidential hopefuls, the DNC has thus far resisted calls to hold a climate-focused debate.

My name is Havana Chapman-Edwards. I am only 8 years old, so I am used to grown-ups underestimating me. And right now, grown-ups are underestimating the climate crisis, too. Some of the most powerful ones in the country only spent twelve minutes at the Detroit debates last week talking about the biggest threat facing young people like me worldwide.

Since I was born, I have moved all over the world. From Cairo, Egypt, to San Diego, California, I have met amazing and beautiful people and seen the Pacific Ocean, the Sahara Desert, and the pyramids. These places are magical just like in the books we read.

Because I have been there in person, I know that girls who live in Ghana, in California, in Flint, and right here in D.C., especially brown and black girls, are hurting because of climate change. Girls are crying out for help because of droughts, air pollution, floods, and other climate disasters, but the politicians are not listening. I spoke outside of a three-day sit-in at the Democratic National Committee (DNC) headquarters in June, and asked them to commit to hosting a climate debate. But the Democrats locked us out and pretended not to hear us.

The solutions to all the problems we have start with education. That’s why we need the DNC to allow a presidential debate on the climate crisis. We are asking for a debate so we can hear exactly how candidates will take on climate change. We want to know which candidates care not only about climate change, but also the issues affected by climate change, including racial justice and gun violence. Most importantly, we want candidates to share their knowledge to educate the American public and other people across the globe. We can’t make our world strong if we leave people behind.

At the DNC, I talked about how I believe that being stronger than fear will help us fight the climate emergency. I said that I wanted to win the fight against climate change so that every kid like me in America and around the world has the chance to grow up, reach our goals and dreams, and even become president one day.

I used my voice to call for a climate debate on the steps of the DNC. Now, I am asking the adults at the DNC to use theirs and be stronger than fear. The world cannot wait. Kids like me cannot wait. I may be tiny, but my voice is not.

To the DNC and especially Chairman Tom Perez, I am asking you to look us in the eyes and do the right thing. The kids, who won’t be allowed to vote until it is too late, are asking you to allow a climate debate so we can pick a president that really cares about our future. Will you listen?