After Tom Escher took over his family’s century-old ferry company in 1997, he wanted to buy a zero-emissions vessel that could whisk tourists around San Francisco without spewing harmful pollutants. Escher, who is 71, said he worried about the health of his four grandchildren and the environment they’d live in.

“Our boats were getting greener, and we were cleaning up, but I said, ‘Are we doing the best we can?’” Escher recalled.

A few years ago, he began searching in earnest for a fossil fuel-free ship, but he quickly hit a wall. Even as battery-powered cars and rooftop solar panels proliferated on land, the maritime industry had been slow to embrace clean energy at sea.

An innovative ferry project could soon change that.

The planned vessel, named Water-Go-Round, would carry 84 passengers and stretch 70 feet long. Construction is expected to start early this fall in Alameda, California, and the vessel is slated to hit the water a year later.

The project is one of myriad efforts by cities in the U.S. and globally to clean up their passenger ships. While ferries contribute a relatively small slice of total maritime air pollution and carbon emissions, they typically operate around densely populated areas, where emissions are known to pose the biggest health threats.

Ferries, tug boats, and other harbor craft can be particularly dirty because they often use the same inefficient engines for decades, said Christina Wolfe, who manages the Environmental Defense Fund’s air quality program for ports. “They’re old, high-horsepower, and high-usage, and that just makes a recipe for very high emissions,” she said of ferry engines.

Some local officials are considering more straightforward solutions, like installing efficient Tier 4 diesel engines or adding onshore electricity supplies, so boats can turn off their engines while at port. Other places are taking a more ambitious tack: In rural Alabama, the Gee’s Bend Ferry operators are replacing John Deere engines with a battery-electric propulsion system, which will make it the first zero-emissions ferry of its kind in the United States. A ferry in Skagit County, Washington, may soon follow suit.

The Water-Go-Round hydrogen ferry is also representative of a larger push by the global shipping industry to clean up dirty fuel-burning ships. In April, the International Maritime Organization adopted a landmark deal to reduce greenhouse gas emissions from ships, a policy that will require a massive uptake of zero-emissions vessels.

Passenger ships are often first to deploy cutting-edge ship technologies because they consume far less fuel and power than ocean-going vessels. Ferries typically keep close to shore, making it easier to recharge batteries or refill hydrogen tanks. And ferry operators face strong public pressure to clean up because they carry throngs of passengers who — unlike lifeless box containers — inhale the diesel fumes, hear the growling engines, and see the noxious black plumes rising from exhaust funnels.

Fuel cells combine hydrogen and oxygen to produce electricity. Unlike diesel engines, they don’t emit any carbon dioxide or health-threatening pollutants — only a little heat and water vapor. “I’m going to drink the exhaust,” pledged Escher, who is investing in the new ferry, in addition to operating it.

Hydrogen itself isn’t always “zero-emissions.” The most common methods for producing hydrogen today require fossil fuels — and thus result in some greenhouse gases. But more facilities are starting to produce “green” hydrogen with renewable electricity or biogas.

The idea to build Water-Go-Round came from an extensive 2016 study by Sandia National Labs. Researchers established that a high-speed passenger ferry powered by hydrogen fuel cells was feasible from a technical, regulatory, and economic perspective. Around two dozen early ship projects already deploy the technology, primarily in Europe.

Joseph Pratt, who co-authored the Sandia study, is now the CEO of Golden Gate Zero Emission Marine, one of several partners in the CARB grant project.

“We’re at the point where we’ve studied it enough, we’ve figured out how you can do it,” Pratt said from San Francisco. “Now we just have to do it.” 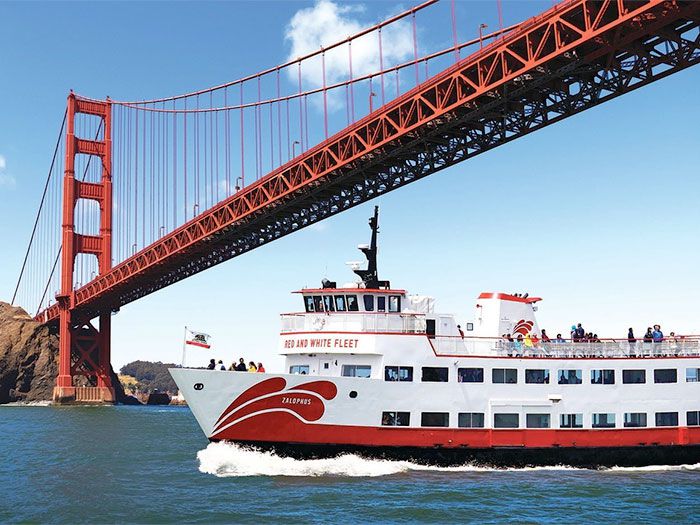 The ferry Zalophus cruises beneath the Golden Gate Bridge in the San Francisco Bay. Red and White Fleet

The plan is for Escher’s company, Red and White Fleet, to operate the vessel for the first three months — and eventually buy it to add to its fleet. Meanwhile, scientists at Sandia and CARB are expected to collect data on the ship’s operations, performance, and maintenance.

The $3 million CARB grant is part of California’s larger $20 million investment in zero-emissions off-road demonstration projects. The funding comes from revenues raised by the state’s cap-and-trade program. Water-Go-Round’s partners have committed another $2.5 million to help launch the vessel.

The planned ferry would carry onboard storage tanks with enough hydrogen to last about two days before a truck refuels them at port. Lithium-ion batteries and electric motors will round out the ship’s power system. Pratt said the goal is to use green hydrogen supplies when possible.

Marine fuel cells face several hurdles to wider adoption. The technology is still relatively expensive, and shipbuilders and maritime officials in many places may be less familiar with hydrogen than, say, batteries. If successful, a project like Water-Go-Round could nevertheless drive interest in fuel cells and hydrogen — particularly where officials or companies are seeking to curb maritime pollution, said Alan Lloyd, the former secretary of California’s Environmental Protection Agency.

“People are going to want to follow that lead,” said Lloyd, a senior research fellow at the University of Texas at Austin’s Energy Institute.

A similar narrative is already playing out with battery-powered ferries, after Norway launched a fully electric car ferry in 2015.

Dan Berentson, the director of public works in Skagit County, in northwest Washington, said his team is closely following developments in Scandinavia, where more electric ferries are expected to ply the fjords. Skagit County officials are now hoping to build their own electric boat to replace their county’s clunky 39-year-old ferry. If all goes to plan, it could launch in 2020.

“Our hope is that the industry will embrace this,” Berentson said.

Maria Gallucci is the 2017-2018 Energy Journalism Fellow at the University of Texas at Austin.