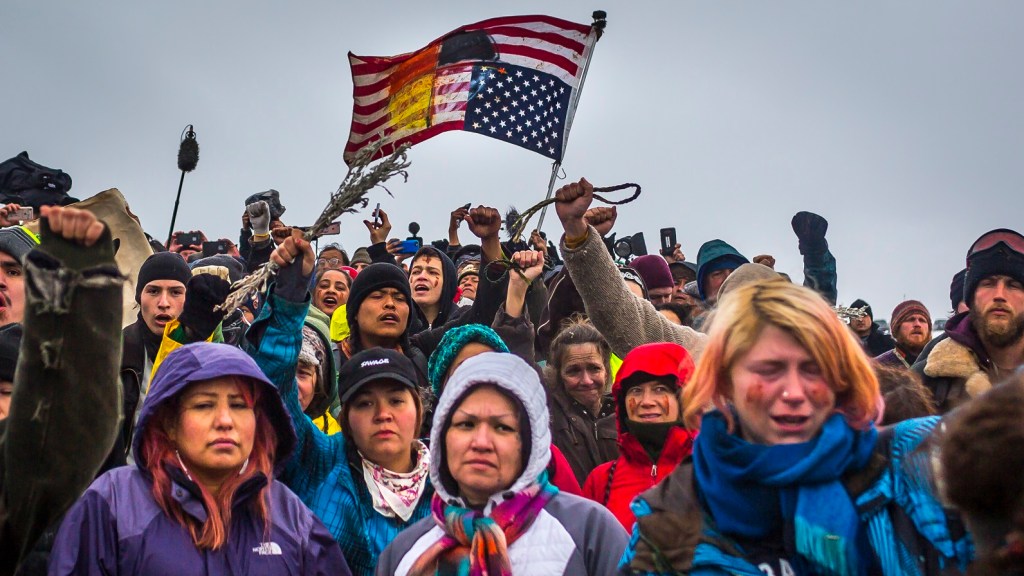 Standing Rock saved Little Feather’s life. Then the U.S. government took it from him.

Little Feather was one of thousands of Native Americans who traveled to North Dakota in 2016 to fight the construction of the Dakota Access pipeline. The 45-year-old member of the Chumash Nation was battling drug addiction at the time, said his wife, Leoyla Cowboy. But the “water protector” movement gave him a sense of purpose, a renewed connection to indigenous elders, and sobriety.

But last year as the oil pipeline began operations, authorities jailed him and charged him with felonies stemming from his involvement in the demonstrations. Little Feather’s case and the prosecution of hundreds of others is part of what activists say is an aggressive campaign by U.S. law enforcement to suppress indigenous and environmental movements, using drawn-out criminal cases and lengthy prison sentences.

“He has been taken from us, and it’s a huge void in our lives,” Cowboy, 44, told the Guardian in a recent interview after Little Feather, also known as Michael Giron, was sentenced to three years. “He is a political prisoner … We were protecting our land. It’s something we have to do, and we’re going to be met with this violence from these agencies, from the federal government, from the state.”

As Red Fawn Fallis prepares for her sentencing next week in the movement’s most high-profile prosecution, activists are speaking out about the toll the cases have taken — continuing to drag on and tear apart families — all as Standing Rock has almost entirely disappeared from headlines.

After Donald Trump took office and ordered expedited approval of the $3.7 billion pipeline last January, the crackdown on activists escalated. The cases stemmed from clashes with police in late 2016 when thousands gathered at Oceti Sakowin and other campsites by the pipeline, facing a highly militarized operation, brutal shows of force, mass arrests and widely condemned jail conditions.

Under Trump, who has had financial ties with the pipeline company, the U.S. Department of Justice has pressed forward with six cases against Native Americans. North Dakota prosecutors meanwhile have pursued more than 800 state cases against people at Standing Rock, including 165 still pending, according to the Water Protector Legal Collective, a legal support team.

“They needed these convictions to make examples of people,” said Rattler, another federal defendant who, like Little Feather, agreed to a plea deal. “We got their attention, and they are scared of us.”

Rattler, a Lakota Oglala man, and Little Feather were each charged with two felonies — civil disorder and use of fire to commit a felony — related to a standoff on Oct. 27, 2016, when police deployed pepper spray and armored vehicles in response to a roadblock set up by activists. More than 140 people were arrested.

The arson charges related to the fact that “several fires were set by unidentified protesters” to thwart police, as prosecutors wrote in one court filing.

If the men were convicted, they faced a mandatory minimum of 10 years. Activists argued the charges were excessive, and some thought the men would prevail in a courtroom, especially considering reporting by the Intercept, which uncovered how a private security firm had used military-style counter-terrorism methods to target and infiltrate the protests.

But the defendants and their attorneys ultimately had concerns about the risks of a trial. One survey of jury-eligible locals found that 82 percent to 94 percent had prejudged protesters as guilty or were biased against them.

“Having a fair trial in Bismarck was going to be impossible,” said Rattler, 45, whose legal name is Michael Markus. “If you go to court in North Dakota, you are going to get convicted.”

Wasté Win Young, a Standing Rock member who is still facing trespassing and rioting charges in North Dakota court, said she was now regularly targeted and racially profiled by locals and police in the area.

“It’s just surreal still living here,” she said, noting that the fossil fuel industry had a lot of influence in the area and that there was heavy local bias against the demonstrations. “They feel like their security, their well-being was threatened by the so-called violent protesters, which was not the case at all.”

Still, Young said she was not afraid to go to court: “I stood my ground and it was in honor of my ancestors and to protect their way of life.”

Red Fawn Fallis was originally accused of shooting at law enforcement, facing a potential life sentence. The case moved forward even after it was reported that a paid informant for the FBI had developed a romantic relationship with her during the protests and was the owner of the gun she allegedly fired. Prosecutors eventually dropped the charge in exchange for her pleading to lesser offenses, and on Monday, she is expected to receive a seven-year prison sentence.

The U.S. attorney’s office did not respond to a request for comment.

Rattler, who is expected to get three years in prison, said the pending case meant he was restricted from freely traveling to indigenous ceremonies and other events.

“That’s been going on for hundreds of years — the federal government telling indigenous people where they can and can’t go,” said Ollie, Rattler’s partner who requested not to use her full name. “They do it just because they can.”

Sandra Freeman, Rattler’s attorney, said it had been difficult coming to terms with the reality of his plea agreement: “He is someone who is a really gentle, non-violent person who has accepted significant, significant time in the Federal Bureau of Prisons.”

Despite everything, Rattler said he was glad he was involved in the movement and wanted to eventually continue the work: “I have no regrets about what I did.”

After Little Feather’s personal transformation at the Standing Rock camps, Cowboy said she was eager to start their lives together: “I have been praying for a person like Little Feather all my life.”

But her husband has been incarcerated since last March when police pulled them over and arrested him while the newlyweds were traveling to an indigenous march in Washington D.C.

With sentencing over, there was some relief in knowing he would eventually come home, Cowboy said. But she also recognized that there would be lasting consequences.

While she was inspired to see the momentum from Standing Rock spread to other fights, she said, it sometimes felt like those still suffering from the North Dakota movement had been left behind. “They are forgetting that we are still here.”