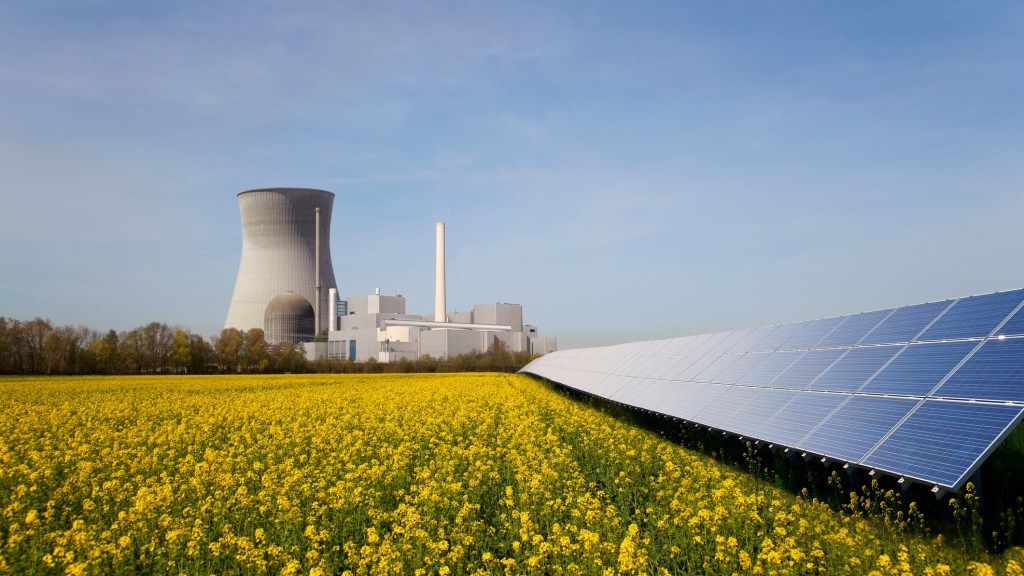 This story was originally published by the Bulletin and is reproduced here as part of the Climate Desk collaboration.

To meet climate targets, we need every tool in the chest. Meeting the Paris climate agreement targets of limiting global warming to less than 1.5 degrees C (2.7 degrees F) of global warming above pre-industrial temperatures — or even a more dangerous but more feasible 2 degrees C (3.6 degrees F) — would require massive and immediate global action to reduce fossil fuel consumption and carbon pollution. Simply put, we’ve already burned through so much of our carbon budget that meeting those targets would take everything we’ve got. (We’ve already locked ourselves in to close to 1.5 degrees C of warming, just based on greenhouse gas emissions to date.)

But the letter includes language that rules out some zero-carbon technologies. For example, it states, “in addition to excluding fossil fuels, any definition of renewable energy must also exclude all combustion-based power generation, nuclear, biomass energy, large scale hydro and waste-to-energy technologies. To achieve this, the United States must shift to 100 percent renewable power generation by 2035 or earlier.”

The listed energy sources all have pros and cons, and groups concerned about their non-climate environmental impacts could certainly make the case for eventually phasing out each one. But the United States currently gets about 32 percent of its electricity generation from natural gas, 30 percent from coal, 20 percent from nuclear, 7 percent from hydroelectricity, 6 percent from wind, and 1 percent from solar, in round numbers. (The remaining few percent come from miscellaneous energy sources such as geothermal, landfill gas, wood, and others.) Were nuclear and hydroelectric power to be eliminated as energy sources at the same time as all fossil fuels, that means that the United States would have to replace its top four electricity sources (nearly 90 percent of its supply) within about 15 years.

Simply replacing all forms of fossil fuels alone (63 percent of the supply) with zero-carbon technologies within this short timeframe would already be an immense task. And the figures here are strictly referring to what it is required for electricity generation in the United States; they don’t even account for other voracious energy-consuming sectors like transportation — which bring the fossil-fuel share of the U.S. economy up to 80 percent, plus another 9 percent from nuclear and 7 percent from hydroelectric power and biomass. Why make the already gargantuan task so much more difficult?

Germany provides a cautionary tale for environmental groups. The country implemented what it called an “Energiewende” (energy transition) strategy that prioritized the phase-out of nuclear power over replacing fossil fuels, despite its goal of achieving a low-carbon energy supply. For example, in the year 2000, 50 percent of Germany’s electricity was supplied by coal compared to 29 percent from nuclear power and 7 percent from renewables. In 2015, the share was 46 percent coal, 15 percent nuclear, and 33 percent renewables. In other words, the country’s coal consumption has remained nearly unchanged since the turn of the century — from 50 percent coal to 46 percent coal. Instead, Germany’s rapid deployment of renewable energy has primarily replaced its nuclear power plants.

There are certainly legitimate objections to nuclear power, but it is nevertheless a zero-carbon energy source. If we consider climate change an urgent, existential threat and if we want to meet the Paris climate targets, then eliminating fossil fuels must be our first priority. Only after fossil fuels have been replaced can we consider doing the same to other zero-carbon energy sources.

Market-based solutions can be effective. Along similar lines, the letter states: “We will vigorously oppose any legislation that … promotes corporate schemes that place profits over community burdens and benefits, including market-based mechanisms and technology options such as carbon and emissions trading and offsets, carbon capture and storage, nuclear power, waste-to-energy and biomass energy.”

The letter seems to envision that the needed carbon pollution cuts will be achieved purely through government regulations rather than market-based mechanisms such as a carbon tax or a cap-and-trade system. But it’s unclear why that must necessarily be our approach. Putting a price on carbon pollution is a logical way to incorporate its costs into fuel and energy prices, and 45 top economists across the political spectrum recently endorsed a carbon tax. And rebating the taxed revenue via regular dividend checks is a progressive measure that would benefit lower income communities.

One concern may be that a market-based system pricing carbon pollution would benefit zero-carbon energy technologies that some letter signatories oppose — such as nuclear, hydroelectric, biomass, and fossil fuels using carbon capture and storage. There are environmental reasons to oppose some of these technologies; for example, other harmful pollution from fossil fuels and the disposal of hazardous nuclear waste present very real problems.

But the letter’s stated primary goal is to meet the Paris climate targets, and we’ll fail if we tie our hands behind our backs by ruling out zero-carbon technologies and market-based policy tools. Phasing out nuclear, hydroelectric, and biomass energy should only be considered after fossil fuels have been eliminated. Pricing carbon pollution certainly shouldn’t be ruled out (and in fact should be pursued vigorously), and even carbon capture and sequestration should remain on the table.

If we consider climate change an urgent existential threat that justifies the Paris climate targets, then at the very least phasing out fossil fuels and carbon pollution must be our top priority when crafting climate policy. Other concerns that undermine zero-carbon energy sources must be secondary, lest we sabotage our own climate-preserving efforts.

Dana Nuccitelli is an environmental scientist, and author of Climatology versus Pseudoscience. He has published 10 papers related to climate change in peer-reviewed journals, including three studies on the expert climate consensus.