Not all fish are created equal when it comes to their impact on the climate. In the prophetic words of Dr. Seuss: “Some are glad. And some are sad. And some are very, very bad.”

A new study takes a rare look at the carbon emissions that come with your choice of seafood. And there are a lot of surprises. Farming catfish creates more emissions than farming chicken, while eating shellfish is even more climate-friendly than a purely vegan diet, according to the study.

This suggests that not all pescetarianism is created equal — and throws another loop into the complicated task of ranking fish sustainability. Take the aforementioned farmed catfish. The Monterey Bay Aquarium calls catfish raised in tanks a “best choice.” But when the researchers looked at the full lifecycle of resources needed to support catfish farms, they found that they were pretty dirty. The recirculating pumps needed to control conditions in catfish tanks require a significant amount of energy, and a lot of that energy comes from coal plants in Asia.

Your lobster bisque is almost as bad: The motors used to check lobster pots burn up a lot of gas. “Lobster has a terrible carbon footprint,” says Ray Hilborn, one of the researchers responsible for the study. On the other side of the scale were mollusk aquaculture — oysters, mussels, scallops, and clams — which are wonderfully efficient, and small wild fish, which don’t take much energy to gather up.

The methods used in the study were sound, and results line up with the findings of other studies, says Richard Waite, a food expert at the World Resources Institute, who was not involved in the research. However, this study didn’t consider the amount of land that different animals require, Waite notes.

About half the greenhouse gas emissions from agriculture come from farmers clearing forests. If you include the land needed to feed the animals, it significantly increases the emissions released in livestock production — making fish look better by comparison. And if you consider the type of land being cleared for farms, it downgrades the sustainability of shrimp farms in Southeast Asia. (It is possible to do shrimp farming right, as Amelia Urry found when she visited this cool shrimpery in Hawaii.) 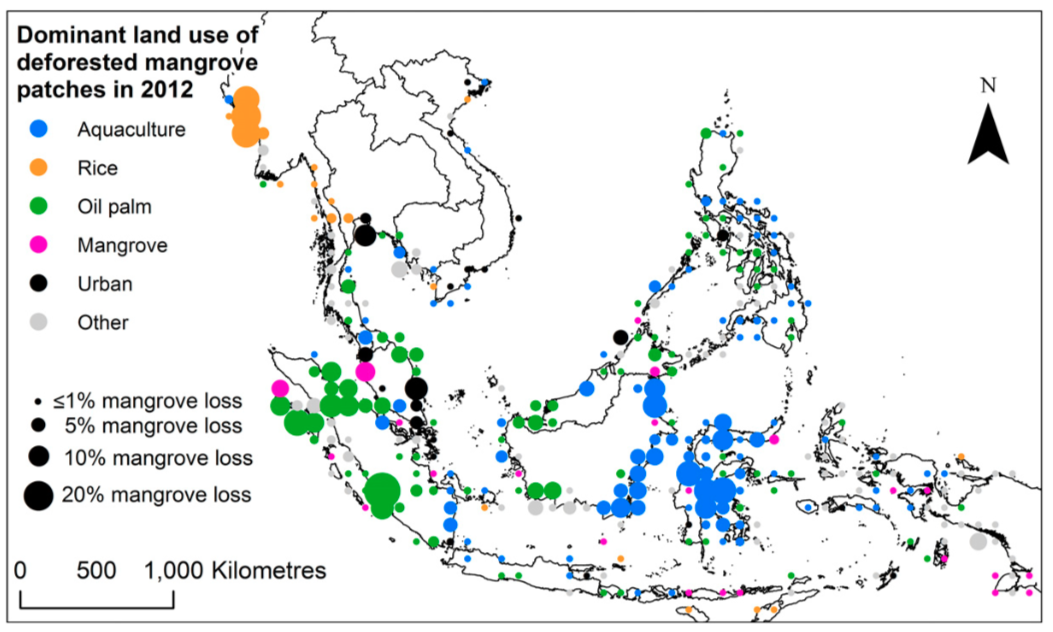 Percentage mangrove deforestation between 2000 and 2012, and dominant land uses of deforested areas in 2012. Richards and Friess

But Waite agreed with the study’s major conclusions. It’s just hard to beat a shellfish farm, he says: “There’s no land use at all, no freshwater use, no fertilizer use — in fact, they clean up the surrounding water.” Shellfish farms are usually in coastal waters, where there’s plenty of space. Consider those factors together, and it looks like it’s more environmentally friendly to get your calories from mussels than from veggies and beans.

The study was supported by a grant from the Seafood Industry Research Fund. Funding can often subtly (or not so subtly) influence science, but in this case it’s unlikely to have done so, given the study was comparing the relative merits of different sectors of the seafood industry.

“A real surprise to me was how low the impact of salmon farming was,” study author Hilborn says. “I’ve done a lot of work with Alaska fishers and they basically hate salmon farming, but it looks like it’s not so bad.”