Last week, a 30 percent tariff that President Donald Trump tacked onto imported solar panels kicked in. Industry experts are predicting it will end up costing the U.S. 23,000 solar jobs in 2018 alone. There’s still a lot of uncertainty about how precisely the new tariff will impact domestic solar panel sales and jobs, but GTM Research expects it to slow the residential solar market by nearly 10 percent between now and 2022. That could affect the number of solar jobs in the future, especially where the power drill hits the rooftop — more than three-fourths of solar jobs in the U.S. are in demand-side sectors such as installation.

The United States was enjoying a 168 percent growth rate in solar jobs since 2010, according to the 2017 Solar Jobs Census report released last week. African Americans in particular have seen a burst in solar workforce participation over the past few years, constituting 7.4 percent of the workforce in 2017, compared to 6.6 percent the year before and 5.2 percent in 2015.

This, of course, is hardly proportional to the general working-age black population, but African Americans were the only racial group to see their share of the solar workforce significantly expand between 2016 and 2017 — every other group, save for whites, saw a drop.

In fact, the entire solar industry saw a decline in jobs last year, losing an estimated 9,800 jobs from 2016. This was the first year the solar census recorded a drop-off since it began tracking job numbers in 2010. The anomalous solar jobs increase found among African Americans is driven in part by the widening list of jurisdictions with large black populations that have adopted new solar policies — states like New York, New Jersey, Tennessee, and Washington, D.C., according to the report. 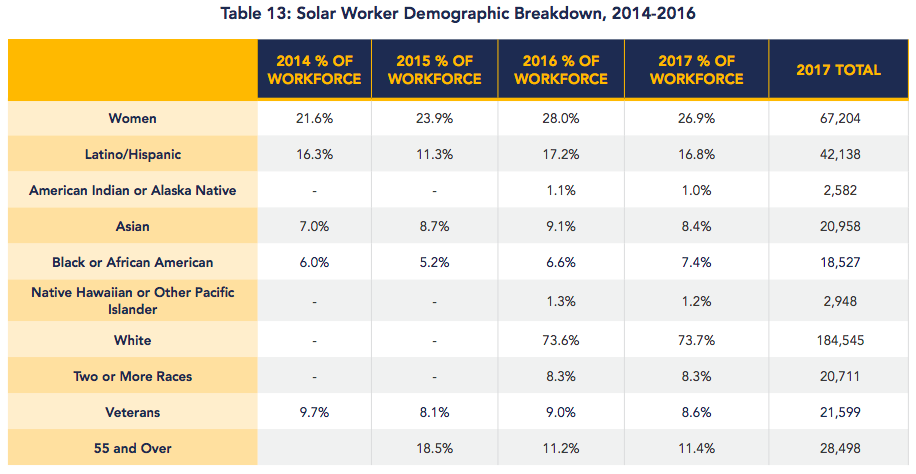 The depression found otherwise across the industry can be attributed to the cool-down in solar projects in states like California and Massachusetts, where solar already had a stronghold. There was a surge in solar power development in 2016, when there was something of a panic about federal solar tax credits expiring that year (Congress later extended those tax credits).

However, the solar market was rattled once again in 2017 when two solar power manufacturing companies, the bankruptcy-headed Suniva and SolarWorld Americas, petitioned the U.S. International Trade Commission (ITC) to adjust the prices of imported solar panels via tariff because they claimed they couldn’t compete. This is what triggered Trump’s decision in January to levy the tariff, based on an ITC ruling in September that sided with the two companies.

The Solar Energy Industries Association took umbrage, saying that such tariffs would not save those two solar companies from bankruptcy, but would “create a crisis in a part of our economy that has been thriving.” The trade group was joined in opposition by organizations that tilt conservative and promote free-market policies, such as the American Legislative Exchange Council, whose International Relations and Federalism Task Force director Karla Jones wrote before the ITC decision:

Over 38,000 solar workers are employed in manufacturing positions at firms domestically making solar components like inverters, racking systems and more. Guess what happens if one doubles the price of solar panels in America? This thriving industry will quickly succumb to tough competition from natural gas, coal and other forms of energy. Those 38,000 manufacturing jobs might disappear if artificially high input costs price the entire industry out of existence. Just ask the domestic steel industry, which blends tens of thousands of domestic jobs after the last successful Section 201 petition slapped tariffs on imported steel.

Since Trump followed through on the tariff, one major question has been whether it would impact urban-scale projects, especially with the spread of solar power developments for low-income households and community-shared distribution. Also, will the steady growth in employment for African Americans in urban centers now be blunted due to the expected rise in solar panel costs?

As the NAACP recently noted in the launch of its new Solar Equity Initiative, low-income households spend more than twice as much of their take-home wages on lighting and heating their homes than do middle-class and wealthy households, and nearly 70 percent of African Americans live within 30 miles of a coal-fired power plant. Which means they live with those plants’ air pollution. Scaling up and pricing down solar costs could help alleviate those problems.

It’s too early to tell what impact this will have on city-located solar jobs with the tariff just kicking in this week. The bulk of the cost of solar projects is mostly in labor, permitting, and installation, even for systems in low-income areas. The cost of panels is usually less than 15 percent of the total cost of these kinds of projects. Still, the future is somewhat uncertain for some organizations that have committed to spreading solar to poor families.

One organization grappling with this issue is Civic Works, a Baltimore nonprofit. It just completed the pilot phase of a new solar initiative that installed solar panels on the rooftops of 10 houses in several low-income communities, including Sandtown-Winchester, the neighborhood where Freddie Gray, who had asthma, was arrested before he was later found dead in police custody.

A loan from the City of Baltimore’s Energy Initiative Loan Program gave the nonprofit the capital to cover all the upfront costs of solar installation on the houses it’s serving. Civic Works will receive additional help from the 30 percent federal solar tax credit to recoup some of those costs, which is generally how low-income solar is financed. Many of the nonprofit’s workers are people who’ve been incarcerated and unemployed. However, nonprofits usually are working on very thin-margin budgets in this game, and can’t afford anything even a little financially surprising.

“Our suppliers have told us, ‘Don’t worry, we have tons of solar panels already,’ so it’s not something that’s going to affect us immediately, but it will down the line,” said Earl Millett, Civic Works’ chief operating officer. “To get the project done that we just did at the end of 2017, we needed everything to pull together perfectly, and we still had just a little wiggle room in the economics.”

Millett continued: “The economics are tough to work out with any solar project, though, and doing it on low-income homes adds an extra complexity. But it’s something people are working to overcome, because having a large segment of our population miss out on the benefits of solar just because they’re low-income residents shouldn’t be acceptable.”

Anya Schoolman, executive director of Solar United Neighbors of D.C., said the the real impact of the tariff will be felt on large utility-scale solar projects, like the fields of panels you might find on undeveloped land or in a desert. Solar United Neighbors has been working to spread community solar and also embarked on a project to rest solar panels on the roofs of 220 low-income households in D.C., at no cost to the homeowners.

“The tariffs are going to be an issue, but it’s one of the smaller variables,” said Schoolman. “We have many other variables to consider such as permitting costs [and] interconnection costs, which are what the utility companies charge, and those things end up making a bigger difference.”

However, the blow to the larger utility-scale solar projects is not insignificant. According to Schoolman, those projects, some of which are now on hold because of the tariff, were just beginning to compete with coal and natural gas. The 2017 Solar Jobs Census found that 86 percent of surveyed solar businesses said the tariff would negatively impact their company. The census also reported that 78 percent of project developers and 70 percent of companies that do installations would decrease their solar activities under new trade restrictions. This was all before Trump imposed the tariff. Since then, one major solar project in Texas has been stalled, according to Utility Dive.

The tariff directly affects only jobs in the manufacturing industry, which account for roughly 15 percent of the solar industry. The installation sector, by comparison, accounts for roughly 52 percent of the industry. Neither Millett nor Schoolman thought the tariff would have any real impact on installation jobs in their programs, at least not immediately, despite the prospect of panel prices slightly rising. Both the installation and manufacturing sectors experienced job losses in 2017, according to the Solar Jobs Census.

Stacey Danner, who ran a company that financed solar panels for low-income households in New Orleans after Hurricane Katrina, said he didn’t understand why Trump would kick the solar industry while it was down with this tariff.

“If you’re talking about jobs and building the industry, then this isn’t the way to do it because you’re throwing workers from thriving businesses in a nascent industry out,” he said. “Now they are back at square one, which puts them back on unemployment and back on welfare rolls. And I thought that what this was what Trump’s policies were supposed to prevent?”