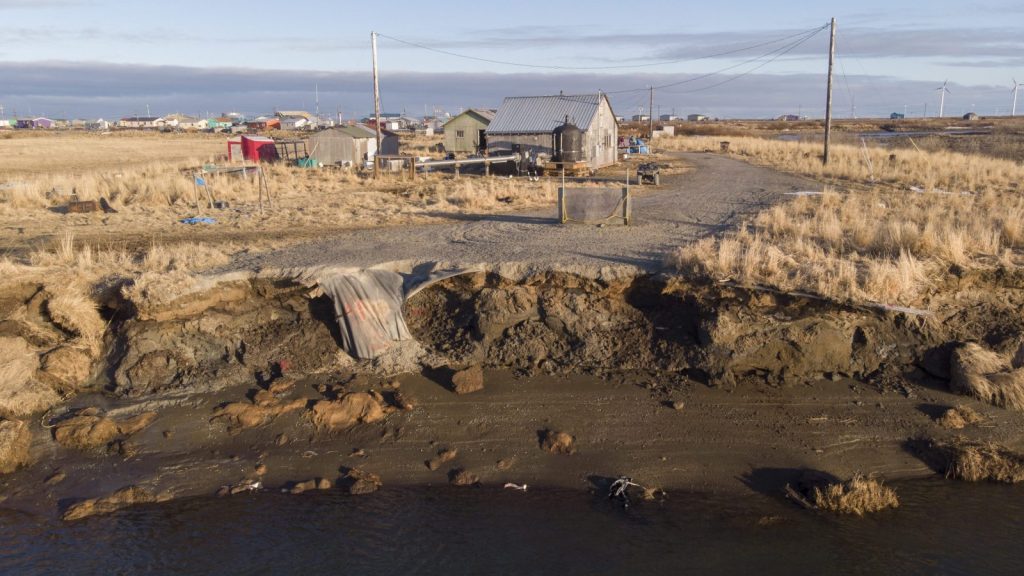 A heat wave pulsating through the Arctic helped push Alaska to its warmest month ever recorded in July, with the state’s vast coastline left completely barren of sea ice.

Alaska’s average temperature in July was a record 58.1 degrees F (14.5 degrees C), nearly 1 degree F above the previous monthly high set in July 2004, according to the National Oceanic and Atmospheric Administration. Cities and towns across the vast U.S. state, such as Anchorage, Utqiaġvik (formerly known as Barrow), and Kodiak all had their warmest month in 125 years of record-keeping.

This heat, 5.4 degrees F warmer than the long-term average for July, helped spur wildfires that shrouded much of Alaska in a pall of smoke and has now resulted in a remarkable melting away of shoreline ice.

There is now no sea ice within 150 miles of Alaskan shores, according to an analysis by the National Weather Service. The pace of ice loss is “unprecedented” in 40 years of satellite records, scientists said, with the Bering Sea, which separates Alaska from Russia, left completely ice-free.

The record-breaking warmth in Alaska is part of a broader heat wave that has swept the northern latitudes, with Greenland shedding a record 12.5 gigatons of ice into the ocean in a single day, Norway experiencing its joint hottest day ever, and forest fires in Siberia tearing through an area as large as Belgium.

Scientists warned that the extreme conditions are consistent with the most pessimistic scenario where countries do little to constrain global heating by cutting planet-warming gases from cars, trucks, and power generation.

“It looks like the worst case scenario put forward by the IPCC could be an underestimate because we are seeing ice melting now that we expected 30 to 40 years from now. It’s alarming because it’s very fast-paced and the consequences are hard to predict.”

Arctic sea ice accumulates over winter before receding as temperatures start to rise in spring. The unusually hasty retreat of ice in 2019 has been prompted by persistent southerly winds, storms, and high temperatures roiling both the Pacific and Atlantic Oceans. Across the Arctic, July set a new record low for sea ice extent, at 2.93 million square miles.

“While we cannot directly compare one particular extreme year to climate change, the long-term trends are obvious — sea ice is declining and temperatures are rising,” said Zack Labe, a climate scientist at the University of California, Irvine.

He added: “Without a dramatic reduction in greenhouse gas emissions, climate change will continue to increase the probability of extreme heat waves around the world.”

The Arctic is heating up at about twice the average of the rest of the world, with the frigid polar region caught in a spiral where sea ice thins and melts away, opening up vast tracts of dark ocean that is more absorbent of heat, causing further warming.

The loss of ice causes numerous hazards for communities living in the Arctic, with many facing complete relocation. Meanwhile, the melting of glaciers in Greenland are a leading contributor to sea level rise that imperils coastal cities around the world via flooding.

Tedesco said that the pace of melting in Greenland this year is on track to break a record set in 2012, when a net 562 gigatons of ice was lost. This will probably raise the global sea level by more than 1 millimeter. If Greenland’s entire ice sheet were to melt, the world’s oceans would rise by about 20 feet.

“What’s happening in Greenland is exceptional and shows that the melting is not only increasing but accelerating,” said Tedesco.

“There are still cascading events we still don’t fully understand. We will see impacts on society and life as we know it.”

The unspooling of the Arctic’s environment will be just one consequence of global heating discussed at an upcoming U.N. climate summit in New York in September.

Governments will meet amid growing alarm over heat waves, fierce storms, drought, and food insecurity that have wracked countries around the world. Such concerns have sparked a global protest movement, headed by young activists such as the teenager Greta Thunberg, who is sailing to New York on a solar-powered boat for the U.N. summit.

“My concern is that Greenland will be forgotten because there will probably be a huge hurricane by then,” said Tedesco. “Momentum is gaining but there is clearly a strong need to take real action on this at a government level.”