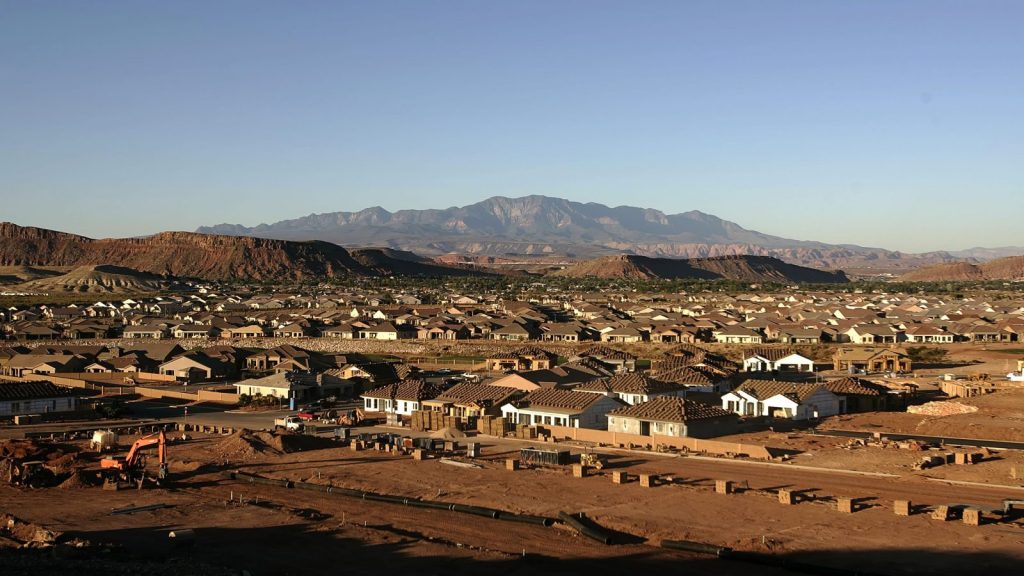 When Latter-day Saint migrants arrived in Utah in 1847, a verse in Isaiah served as consolation to them in the desiccated landscape: “The wilderness and the solitary place shall be glad for them; and the desert shall rejoice, and blossom as the rose.”

Lately, the desert has blossomed nowhere more than the St. George area, in the state’s southern reaches. The city is a picturesque outpost, with red-rock desert framing bright green lawns and golf courses, all built around the stark white Mormon temple in the center of town.

Brigham Young’s adherents came here to grow crops, primarily cotton — hence its reputation as Utah’s Dixie. Today, that ceaseless sunshine is luring so many tourists, retirees, and students that St. George has become the fastest-growing metropolitan area in the country. According to Census Bureau data released in March, the metro, home to 165,000 people, grew 4 percent between 2016 and 2017.

“Six million people visit the area every year. As people visit here, some of them decide to stay,” St. George Mayor Jon Pike said. The area remains a retirement community, “but we also have 33,000 students K through 12, and we have a fast-growing university [Dixie State University].” Healthcare is a booming industry, and, like many growing cities, St. George has a section of town earmarked for tech companies. Mixed-use developments are popping up downtown. The growth likely won’t slow any time soon: State demographers believe the area will surpass 500,000 residents by 2065.

As is the case with other growing desert burgs, St. George grapples with water-supply issues. But the challenge here is unique. Remarkably cheap rates mean that residents of an area with only eight inches of annual rainfall are using tremendous amounts of water. An average St. George resident uses more than twice as much water as the average citizen of Los Angeles.

Political leaders at the state and local level view this primarily as a supply issue. Their preferred solution is a gargantuan $1.4 billion pipeline that would connect the region with Lake Powell, a reservoir along the Colorado River. With the aid of pumping stations, the pipeline would shuttle water over 140 miles and 2,000 feet of elevation gain. The goal is to store 86,000 acre-feet a year in nearby reservoirs and aquifers — more than enough, officials say, to meet the demand of the growing population and decrease reliance on the dwindling Virgin River, currently Washington County’s primary water source.

“We certainly are committed to conservation, but we don’t think that gets you there alone, especially with the organic growth and the tremendous in-migration that’s occurring in the Southwest,” said Ronald Thompson, general manager of the Washington County Water Conservancy District, the wholesaler that supplies water to St. George and other cities in the county.

In 2006, the state legislature passed a bill to fund the Lake Powell project, but construction has been delayed since then by stop-and-go planning (at this point, pipeline approval is on hold due to uncertainty about which federal agency has jurisdiction over the project).

Utah typically uses less than its allotted share of Colorado River water, which is divvied up among Western states, but climate change and growing populations are taxing relations among the river’s interstate constituents. “Yes, [Utah residents] are legally entitled to that water from the Colorado River,” Nuding said. “But … I think that we should meet certain metrics of water stewardship before further depleting the Colorado River.”

Water rates here don’t punish heavy use. A St. George household that goes through 16,000 gallons a month would see a $47 water bill; equivalent usage would cost a Tucson household $184. Washington County Water Conservancy District is in the process of raising rates 5 to 10 percent each year until baseline rates are tripled, but even then, they would be a bargain compared to some cities.

Utah’s water-delivery systems are largely gravity-fed, thus keeping costs down, and most homeowners have access to unmetered non-potable water for landscaping and irrigation. This, plus state oversight of water rates, keeps the rates low — and consumption high.

Any major reduction in consumption here will require a cultural shift. St. George is marketed as a desert oasis. Nine golf courses are located in the region, and it remains an agricultural stronghold. Local municipalities offer basic water-conservation rebates — St. George, for instance, helps cover the cost of replacing high-flow toilets — but nothing at the level of cities that, for instance, pay residents to replace sod with desert-appropriate landscaping.

Mayor Pike heralded developers who are voluntarily choosing water-smart appliances and landscaping, and cited the planned Desert Color community as an example. But that project’s water-wise cred has been questioned: Its centerpiece is an 18-acre artificial pond.

That said, St. George’s growth could inherently promote efficiencies. Apartment and townhouse construction is finally catching up with demand, which will keep some new residents from the sprawling single-family homes and yards that guzzle so much water. A good deal of new construction will take place on agricultural land where water is already allocated.

But per-person efficiency doesn’t mean less water use overall. Every St. George resident could cut her water use in half, but if the population more than doubles, the city is still using more water. Such is the conundrum of desert growth. “We’d be wise to diversify our sources,” Pike said. “If the Powell pipeline isn’t built, that would change things. … It would slow growth.”

Constructing the pipeline, oddly enough, might trigger cost increases that could curtail water use. While the state would cover the pipeline’s initial costs, locals are on the hook in the long run. In a letter to Utah’s governor, economists at state universities said that water rates would have to jump sixfold for the region to meet its repayment obligations. “Of course, increasing water rates this much would significantly decrease Washington County residents’ demand for water,” the economists wrote. “In our analysis, demand decreased so much that the [Lake Powell pipeline] water would go unused.”

If rates are going up anyway, conservation advocates think the pipeline talk is occurring too soon. “Why don’t they just try [raising rates] now, and see how much demand changes?” Nuding said. “From a water-management perspective, that makes all the sense in the world.”

In this blossoming desert city, leaders have a choice: Do they let the roses go brown, or pay exorbitantly to keep them?