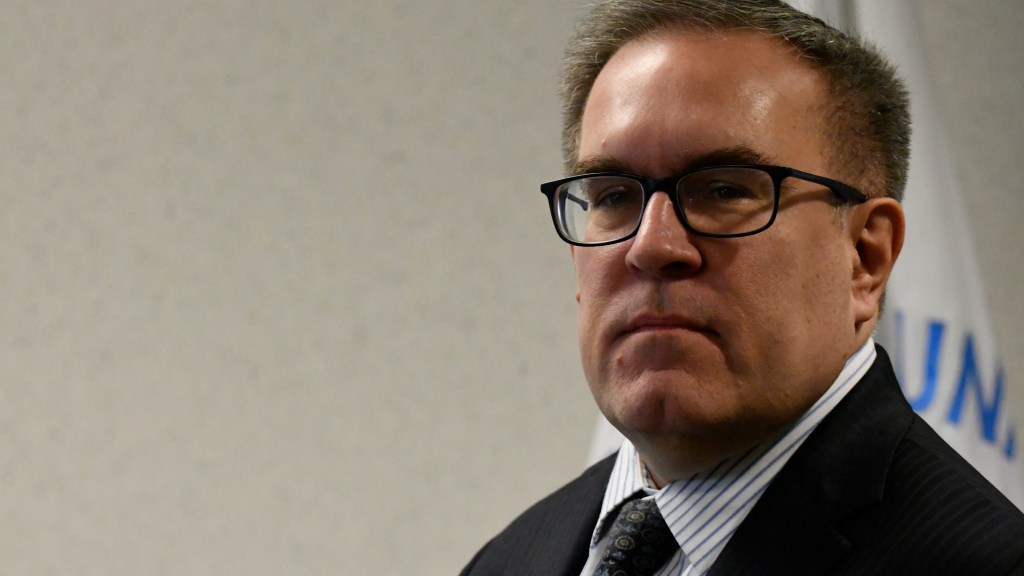 Andrew Wheeler has been confirmed as the nation’s 15th administrator of the Environmental Protection Agency.

In a statement posted to Twitter, Wheeler said he was “deeply honored” and looking forward to carrying out President Donald Trump’s agenda.

I am deeply honored, and I look forward to continuing the President’s agenda and the work of the Agency alongside all my EPA colleagues. 2/2

Senator Joe Manchin, a Democrat from West Virginia, voted against Wheeler after having supported his nomination as deputy administrator last year. Senator Susan Collins of Maine was the lone Republican to vote against the nomination. She opposed Pruitt’s nomination but, like Manchin, previously voted to confirm Wheeler as the agency’s No. 2 official.

In a statement Wednesday announcing her decision, Collins said Wheeler is “certainly qualified” but that she has “too many concerns with the actions during his tenure as acting administrator to be able to support his promotion.”

“The policies he has supported as acting administrator are not in the best interest of our environment and public health, particularly given the threat of climate change to our nation,” she said.

His confirmation adds yet another member to President Donald Trump’s Cabinet who as recently as 2017 was on the payroll of the industries he now regulates.

In 2017, the Senate confirmed Alex Azar, a former executive at the pharmaceutical giant Eli Lilly & Co., to lead the Department of Health and Human Services. In January, former Boeing executive Patrick Shanahan took over as acting secretary of defense after James Mattis’ abrupt departure. The next day, David Bernhardt, a former oil lobbyist and No. 2 at the Department of the Interior, became acting secretary when Ryan Zinke resigned amid mounting ethics investigations.

A week later, Trump nominated Wheeler, who in December became the longest-serving acting administrator in the EPA’s history, to take on the role permanently.

Thursday’s confirmation comes a day after the Senate voted 52-46 to end debate on the nomination. In a speech on the Senate floor following that vote, Senator Tom Carper, a Democrat from Delaware, said that in some cases Wheeler has “accelerated the environmental damage and regulatory zeal” that Pruitt began.

“Time and time again Mr. Wheeler has proven that his environmental policies are almost as destructive and extreme has his predecessors’,” he said.

Senator John Barrasso, a Republican from Wyoming, chair of the Senate Committee on Environment and Public Works, said Wednesday that Trump picked the right man for the job. Regulatory proposals to replace the Clean Power Plan, an Obama-era rule to cut carbon pollution from power plants, and to revise the 2015 Waters of the U.S. rule, which sought to safeguard drinking water for millions of Americans, shows that Wheeler “is serious about clear air and clear water while also understanding there’s an important role for states and local communities to play,” Barrasso said.

Wheeler’s record-breaking reign as acting administrator was marked by an unprecedented assault on greenhouse gas regulations amid historic wildfires and hurricanes that scientists say offer a preview of the rapidly warming world to come.

In August, Wheeler unveiled a proposal weakening fuel economy standards for new vehicles in a move seen as a “giant giveaway” to oil companies even as electric automobile technology made huge leaps forward. Weeks later, he proposed gutting a landmark Obama-era power plant regulation, allowing, by the EPA’s own calculus, enough pollution to cause an additional 1,400 premature deaths per year.

The planet has already warmed more than 1 degree C (1.8 degrees F) above pre-industrial levels. As a result, many Americans born after the mid-1970s have never experienced average temperatures unaffected by human-caused emissions. But in October, the United Nations released a landmark report predicting catastrophic effects of warming beyond 1.5 degrees Celsius (2.7 degrees F) — a fate that’s all but certain unless world governments halve emissions by 2030. A month later, federal scientists from 13 agencies, including the EPA, confirmed the findings in a National Climate Assessment that forecast U.S. average temperatures surging “9 degrees F (5 degrees C) or more by the end of this century.”

In response, Wheeler, despite admitting he hadn’t read the multiagency report, dismissed its findings and threatened to intervene in the drafting of the next National Climate Assessment.

In December, Wheeler delivered another two victories to the coal industry that, until mid-2017, had paid him to lobby the government. He proposed loosening requirements that coal-fired power plants reduce carbon dioxide emissions. He capped off the month by announcing plans to relax a rule restricting how much mercury and other dangerous pollutants coal-fired plants can release into the air.

In February, Wheeler announced that the EPA would consider regulating toxic, cancer-causing “forever chemicals” contaminating drinking water across the country — a move critics said amounted to a delay that could sicken millions. Last week, he broke off negotiations with California over a national vehicle fuel economy standard, setting the administration up for a lengthy legal fight with the Golden State, which is allowed under the Clean Air Act to set its own pollution limits.

Environmental groups reacted to Thursday’s confirmation much as they did when Wheeler took the reins as deputy administrator.

“Wheeler wants to turn the EPA into a wish-granting service for polluters, no matter the cost to public health or wildlife,” Emily Knobbe, EPA policy specialist at the Center for Biological Diversity, said in a statement. “But it’s only a matter of time before his dirty dealings land him in the same trash heap as his predecessor.”