Right now, on the shores of Antarctica, there’s open water crashing against the largest ice shelf in the world. The annual ice-free season has begun at the Ross Ice Shelf — a month ahead of schedule.

The frozen region of freshwater ice the size of France partially protects the West Antarctic Ice Sheet from collapsing into the sea. In recent years, the ice-free season in the Ross Sea has become a routine event — but it happened this year on New Year’s Day, the earliest time in history.

“Antarctic sea ice extent is astonishingly low this year, not just near the Ross Ice Shelf, but around most of the continent,” says Cecilia Bitz, a polar scientist at the University of Washington.

In recent years, scientists have set up seismic monitoring stations on the ice shelf to track the wave energy as it percolates inland, potentially causing stress fractures on the Ross Ice Shelf along the way.

Bitz pointed to low ice concentration also happening right now in the Amundsen Sea, more than 1,000 miles away from Ross, and that’s potentially even more worrying. In a worst-case scenario, with continued business as usual greenhouse gas emissions, ice shelves all across West Antarctica could collapse within decades, melted from above and below and shattered by wave action.

After that, it would probably be just a matter of time before West Antarctica’s massive land-based glaciers, like the “Doomsday glaciers” at Thwaites and Pine Island, collapse as well, sending sea levels upward by as much as 10 feet and flooding every coastal city on Earth. 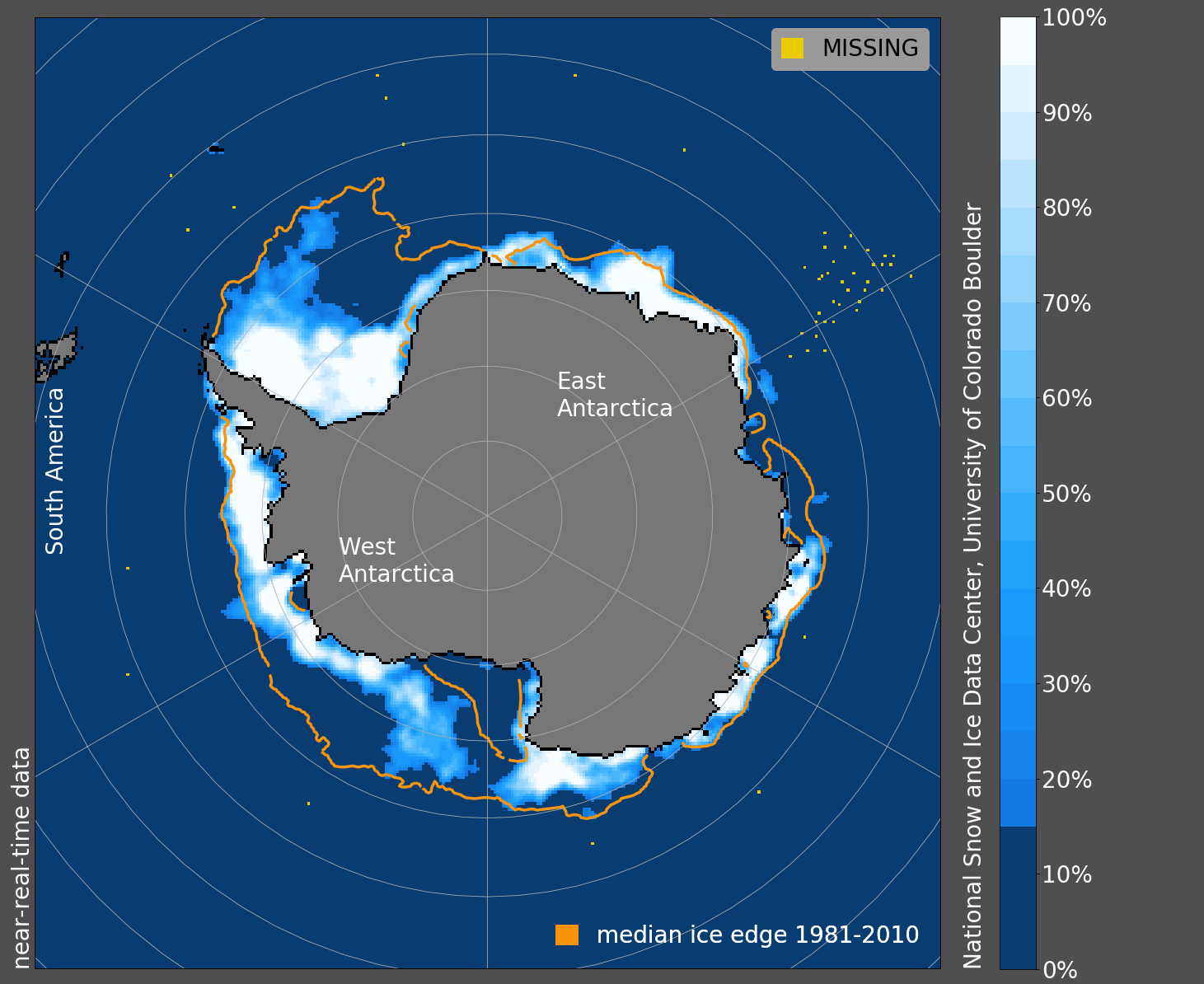 Sea ice concentration on January 1, 2019. The Ross Sea is on the lower edge of West Antarctica and Amundsen is north and near this map’s West Antarctica labeling. National Snow & Ice Data Center

Across the entire continent, there are more than 750,000 square miles of sea ice missing, a record deficiet for this time of year. Because it’s approaching mid-summer in the Southern Hemisphere, Antarctica will keep shedding sea ice for about another six weeks or so, and is currently on pace to drop far below the all-time record low set in 2016.

The North Pole and South Pole are both very cold, of course, but they couldn’t be more different in how climate change is affecting them.

The Arctic is an ocean fringed by cold continents, and has already passed a tipping point. Sea ice there has been declining sharply for decades — so much so that about a year ago, scientist declared the start of a “New Arctic,” with conditions likely unseen in at least 1,500 years, and probably much, much longer.

Owing to its unique geography (a cold continent fringed by a relatively warmer ocean), sea ice in the Antarctic region has long been considered something of a climate wildcard. A sharp decline in the Antarctic began only two years ago, and scientists aren’t sure yet if it will continue. If 2019 and the rapidly warming Southern Ocean is any indication, it will.