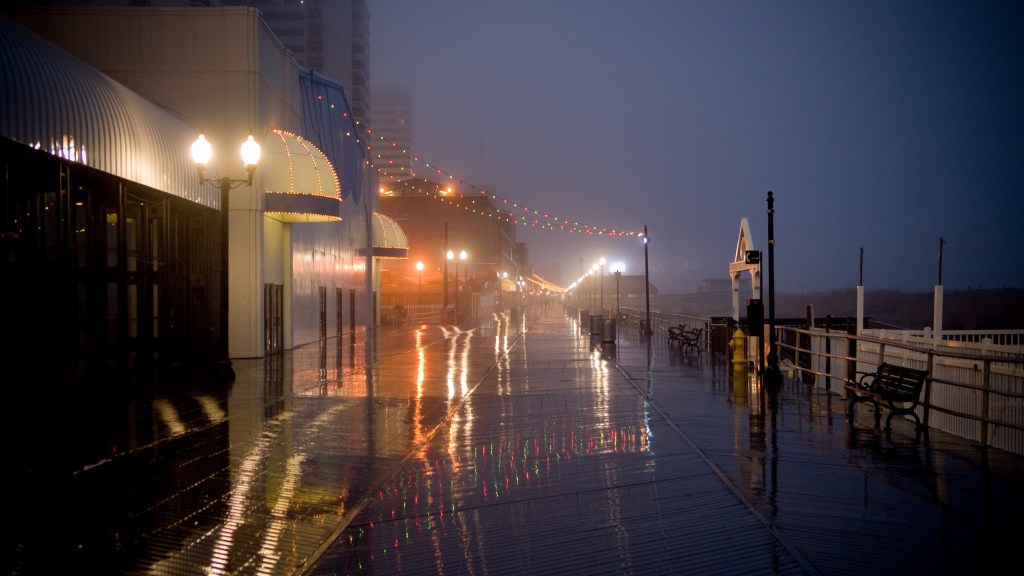 Atlantic City, the once-proud gambling and resort destination, is treading water. In 2017, it was one of three U.S. cities that experienced the most record flooding from high tides, according to a June report from the National Oceanic and Atmospheric Administration.

That distinction isn’t just a warning shot, signaling a problem the town can still avoid. A certain amount of sea-level rise is locked in no matter what we do. And as the effects become more and more immediate, cities on the East Coast are reckoning with how to adapt.

Less than 200 miles away, the Maryland capital of Annapolis is in a similarly sinking boat. A recent study published in Science Advances quantifies just how bad sea-level rise can be for the local economy. Stanford University researchers found that eight flood-affected businesses in downtown Annapolis missed out on 3,000 visits in 2017 — putting losses somewhere between $86,000 and $172,000.

It’s easy to imagine sea level rise as a slow creep, threatening to swallow cities whole over many, many years. But the waters aren’t that tranquil. When storms happen, or a high tide washes in, things flood — and the water might not be coming from the shore, tsunami-style. It can surge up from storm drains and gutters, as Nancy McPherson, the manager at the Annapolis Marine Art Gallery, told the Guardian.

“Even though these floods don’t grab media attention the way big storms do, they have a real and growing impact on the health of coastal communities,” said Miyuki Hino, a co-author of the Science Advances study and a Stanford graduate student. “By understanding the impacts of high-tide floods, cities have a stronger evidence base for deciding how to adapt to sea-level rise.”

According the study, minor floods reduce customer visits to local businesses by roughly 40 percent compared with a normal day. Moderate floods drop them by up to 65 percent, and major floods by nearly 90 percent. This is not surprising — one foot of water is enough to float some cars, and another foot will sweep even heavy ones off their wheels. That seems a hefty price to pay for a dinner out. Still, the economic burdens of sea-level rise are serious cause for concern — and one glimpse of just how much climate change is going to cost us.

“Because the impacts grow really quickly as sea levels rise, it’s critical to be aware of the issue before it materializes into recurrent flooding,” Hino said. “And for communities already experiencing it, there’s a clear and urgent need to invest in adaptation.”

Annapolis, for example, is beginning a flood mitigation project, which will hopefully “improve the resilience of the downtown area.” And the nearby United States Naval Academy has plans to raise one of its seawalls.

For Atlantic City, some of the proposed adaptation plans look a little bit different.

Sea-level rise is only the latest of the New Jersey town’s economic woes. The 2008 recession hit Atlantic City particularly hard, and millennials don’t seem to enjoy gambling as much as boomers did. But this newest challenge is seen by some as a chance for the resort city, once known as America’s Favorite Playground, to reinvent itself.

In 2015, the architecture and design firm Perkins+Will proposed a plan to turn Atlantic City into a climate research hub. Rather than trying to keep the rising seas at bay, convincing people to go on gambling and partying, the city could capitalize on its unique vulnerability, offering scientists an ideal location to study the various effects of sea-level rise firsthand.

That plan was recently pulled out of mothballs and updated by a local man named David Dichter, according to a recent story in Longreads. It would involve a greater focus on entertainment and tourism, to generate more revenue. But the city could become a hotspot for climate conventions, and invite the public to participate in climate change-centric tourist attractions — sort of like a Pompeii for the anthropocene.

“It wouldn’t just be research,” said David Green, one of the architects behind the original plan from Perkins+Will, who has been consulting with Dichter. “A lot of the things that would be tested would be interactive.”

Green and Dichter had hoped to showcase — and build revenue from — an example of what sea level rise actually looks like in a place where the problem is becoming less and less theoretical. “People just don’t understand,” Green said. “They see these maps and they say ‘this is where sea-level rise is going to be in 2040, we’re going to lose this much coastline,’ but nobody understands what that means.”

With Atlantic City functioning as a sort of living museum, Green and Dichter thought they could bring the concept of sea-level rise to life for people. But the plan is currently on hold.

Perhaps Annapolis, and other eastern cities that are feeling the effects of rising seas, could try a similar approach. When life gives you sea level rise, it seems you have a few options — some more inventive than others. You can ignore it, try and build barriers around it, or turn it into a business model and set up a (more resilient) shop.