Don't look now, but the House just woke up to the cost of climate inaction 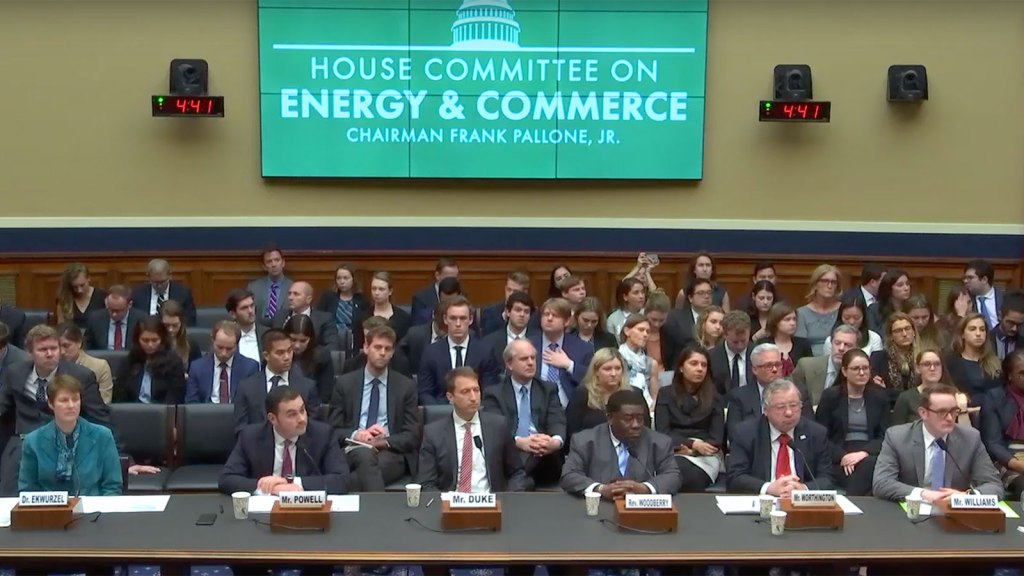 A bunch of Republicans and Democrats from the U.S. House of Representatives got together and came to a shocking bipartisan agreement: Climate change is a thing. And boy is it going to cost us.

Throughout the subcommittee hearing there was a constant theme: the high cost of inaction.

“Some of our colleagues may protest the cost of climate protection,” said Representative Paul Tonko, a Democrat from New York, in his opening statement. Tonko noted that Americans are already suffering the costs of wildfires, storms, and flooding. “I implore you: Now is the time to join us. We want to work together but inaction is no longer an option.”

Rep. @FrankPallone on climate-related extreme weather events: "Events disappear from the headlines in a matter of weeks, but the work to rebuild and recover takes years."

To drive home their points, Democrats invited a mix of high-profile witnesses including Brenda Ekwurzel, senior climate scientist at the Union of Concerned Scientists. She opened by talking about the Polar Vortex (a clapback on Trump’s tweet that mocked global warming?). She compared it to a “weak seal on a freezer door,” allowing cold blasts to sweep down from the Arctic.

Speaking about the productivity losses from a changing climate, Ekwurzel noted that, because extreme temperatures take a toll on workers, climate change could cost people $155 billion in lost wages every year. “Under a low emissions scenario, we could take a bite out of nearly half of those damages.” Ekwurzel made sure to highlight the two bombshell climate studies released last year: the federal government’s Fourth National Climate Assessment and the IPCC report.

"This is a make-or-break decade" to hold global temperatures to 1.5°C, says @BrendaEkwurzel of @UCSUSA at today's @EnergyCommerce climate hearing.

Reverend Leo Woodberry of the Kingdom Living Temple Church in Florence, South Carolina, put stories and faces to the places already hit by Hurricanes Florence, Michael and Irma. “We don’t have to wait 12 years for a switch to be flipped. Americans are suffering the impacts of climate change right now,” Woodberry said. “People are being displaced, communities are getting destroyed.”

Rev. Leo Woodberry (@KingdomLiving4u), testifying before the committee, calls for building a "wall of protection around the citizens of this country" to defend against climate change. "We must build a wall of mitigation, adaption and resilience."

Republicans, led by subcommittee ranking member John Shimkus from Illinois, had their own witness list, seemingly aimed to highlight what businesses are doing to combat climate change, instead of trying to challenge the science behind the issue.

Of note: The majority of Republicans on the climate subcommittee don’t have the best track record when it comes to understanding climate change.

According to @amprog, 7 out of 10 Republicans on @EnergyCommerce's climate subcommittee are climate deniers who've received "a total of $4,167,162 in lifetime fossil fuel contributions between the seven of them for an average of $595,308 each." pic.twitter.com/mGuhOG1mCg

Rich Powell, head of the conservative clean energy group ClearPath, talked about “politically-realistic” and “technology-inclusive” solutions to the challenge of climate change.

ClearPath chief @powellrich, whose groups is a "conservative clean energy" advocate, says the planned coal plants in developing Asian countries would "completely offset" a decarbonized U.S. economy. He goes on to tout fracking.

The U.S. Energy Association’s Barry Worthington emphasized the need for a repertoire of energy sources, including renewables, nuclear power, and fossil fuels. When Shimkus asked if it’s reasonable to drop fossil fuels entirely, Worthington balked, because the country depends on domestic oil and gas. But you know what else is domestic? Sunshine and wind.

Regardless, there was a measure of bipartisan agreement. Representative Diana DeGette from Colorado asked all the witnesses: “Do you all agree that climate change is real and human activity contributes?” All witnesses said yes. Quite the plot twist.

“That in itself is a revolutionary step for this committee. Thank you for that,” DeGette said.

Could this be a good omen in this time of climate upheaval? Ekwurzal, in her closing thoughts, put it thus: “I think it is going to be a cleaner, healthier world–when we act now.”