Avian flu is hammering hens — should poultry farmers get a bailout? 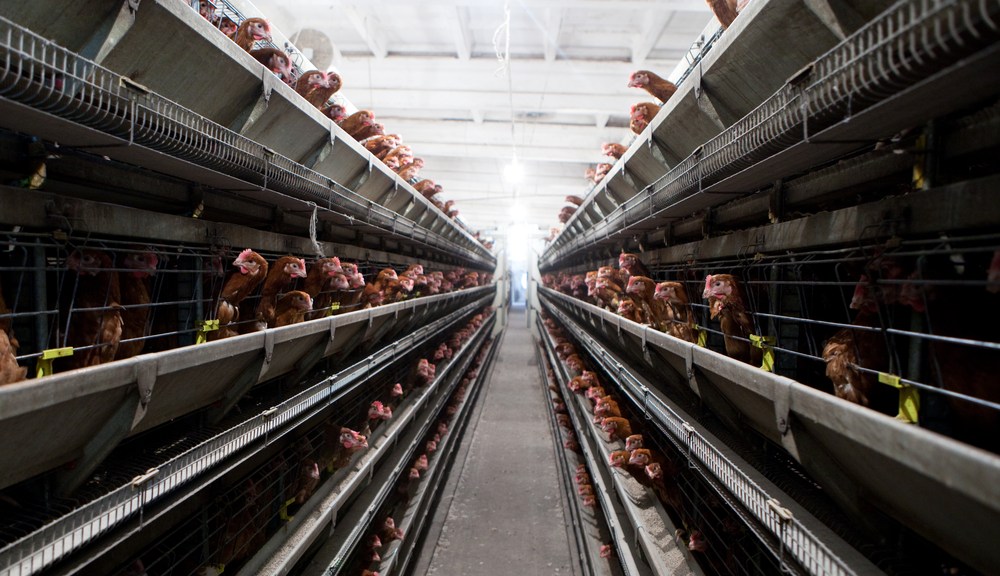 Avian flu is hammering hens — should poultry farmers get a bailout?

You may have noticed that the price of eggs has gone up. That’s partially due to the Highly Pathogenic Avian Influenza epidemic that decimated poultry farms across 15 U.S. states this spring. The death toll from the flu and culling has surged to over 48 million birds. The bulk were egg-laying hens, many concentrated in massive Iowa farms. One farm lost a staggering 5 million animals. Which made me wonder — has big poultry finally gotten too big for its own good?

Michael Greger, director of public health and agriculture for the Humane Society for the United States, told me that big chicken houses are particularly vulnerable to disease. Greger singled out the caged laying-hen operations where chickens are densely stacked on top of each other as a particularly effective disease incubator. “We overcrowd millions of birds in these buildings. You stuff someone in an elevator and they sneeze, and it’s common sense why these things spread like wildfire. Migratory birds provide the fuse, and these factory farms are the explosive. So you have to get rid of these factory-farm powder kegs.”

Greger thinks we should be more concerned with the health risk the avian flu virus poses to humans: “This is a virus that we know has the capacity to jump from birds to people. This is not a virus to mess with, when all we’re hearing is about the economic implications. We have to realize that influenza is the last great plague of humankind and the only known pathogen capable to infect millions of people in a few months.”

The industry, of course, disagrees with the assertion that bigger is more dangerous. Chad Gregory, CEO of egg farmer cooperative United Egg Producers (UEP), which represents 95 percent of America’s egg laying hens, pointed out that the first egg farm infected was cage-free. “So I would say to HSUS that this virus does not discriminate on housing type at all.”

So who’s right here? I went looking for answers in academia and found Montse Torremorell, an associate professor at the University of Minnesota’s College of Veterinary Medicine, who basically agreed with Gregory. “Unfortunately, viruses don’t discriminate between large and small operations,” she said.

Large operations put more birds at risk at once — when a disease hits, more birds die. But having small operations could increase the risk of disease spreading, she said.

“If you were to have the same number of birds that we need to produce food distributed in small sites, you would have flocks everywhere and there would be many, many challenges associated with that,” Torremorell added.

In the end, she said, small versus large is the wrong way to look at the issue.

“The question really is what sort of biosecurity procedures you need to have in place to minimize disease transmission in each of those types of operations,” Torremorell said.

A Reuters reporter that visited Iowa farms during the worst of the outbreak found biosecurity procedures still worryingly lax at several operations. Gregory said, “It wasn’t necessarily poor biosecurity that lead to infections but wind that transmitted the virus, so a farm with great biosecurity got the virus because it came through their fans.”

As if all this weren’t enough, the virus is expected to return in the fall when it thrives in colder weather. Many afflicted farms are already rebuilding flocks, though some never recovered and closed up shop. To that end, the House Agriculture Committee held a hearing on Thursday on the federal government’s handling of the diseases’ spread, and the bulk of a Senate Agriculture Committee hearing on July 7 focused on the government’s response to the crisis.

The USDA’s indemnity reimburses farmers for the market value of flu-stricken birds. Taxpayers also foot the bill for cleanup and disposal. USDA secretary Tom Vilsack has announced that taxpayers would pay $191 million to producers for losses, and that the total government bill including cleanup is $700 million.

But the egg industry wants more. Testifying before the Senate hearing, egg farmers and industry representatives like UEP’s board chair pushed the USDA to change rules on how the reimbursement is calculated. Since laying hens produce more income than a broiler chicken (processed for meat), producers want more money. And according to Gregory, there’s also value in keeping American egg producers in business because of “how safe our farmers produce eggs compared to the welfare and environmental standards in other countries.”

There’s also been talk of a federally subsidized program — akin to crop insurance but for poultry producers — from both Sen. Amy Klobuchar (D-Minn.) and Rep. Steve King (R-Iowa). Presumably, the new program would offer a suite of production and revenue protection products with taxpayers subsidizing the bulk of premiums.

During the Senate hearing, industry representatives were unanimous in their support of an additional insurance-style program, and Vilsack was an early champion.

Iowa State University professor of agriculture economics Bruce Babcock acknowledges that there may be a place for federal funds to keep money flowing to food companies because “we want eggs, after all,” but that “it seems ridiculous to put an insurance program in place when you know that the claims are going to be huge. Who would want to insure something that you know is going to happen? You have to remember that federal crop insurance is not an insurance program; it is a welfare program for farmers. It is a way of delivering money to farmers. It is not insurance.”

Joshua Sewell, a policy analyst with Taxpayers for Common Sense, doesn’t like this idea. Sewell supports a safety net for farmers that “face a catastrophic loss that was unforeseen, unpreventable, and unmanageable by the private market,” but argues that an indemnity program layered on top of subsidized insurance is counterproductive.

“This complex web of policies has fueled consolidation in the poultry sector and resulted in ever larger operations. Non-diversified operations with millions of birds are at great risk from a disease outbreak or other market disruption. But these exist in large part because federal policies encourage this business model. A farm with 5 million birds and no other revenue streams is setting itself up for failure,” Sewell said.

“If the poultry industry was required to cover more of the inevitable, foreseeable risks of the status quo, it’s likely the risks of bird flu, both to human health and the economy, would be greatly reduced. There’s an entire supply chain from producer to handlers and processors and ultimately consumers that have an interest in a functioning poultry sector. And it’s these folks who should bear responsibility for managing the financial risks of keeping their industry afloat,” Sewell said.

HSUS’ Geber is surprisingly supportive of helping farmers hit by bird flu, even if it does enshrine the status quo.

“The indemnity programs are set up so that producers don’t hide infection,” he said. “We need this as transparent as possible and the only way we get that is by writing checks. Unfortunately, you don’t get much of an incentive for industry to change.”

Still, since avian flu does indeed pose a threat of jumping to humans, it’s worth asking whether taxpayers might be better served by spending that money on zoonotic disease research, or biosecurity improvements, or development of potential replacements for eggs.

Or how about this for a crazy idea: Since the American Egg Board gets money from every egg sale to do promotion and research for the industry — hauling in $23.5 million in revenue in 2014 alone — maybe they spend some of their own money helping get us out of this mess?