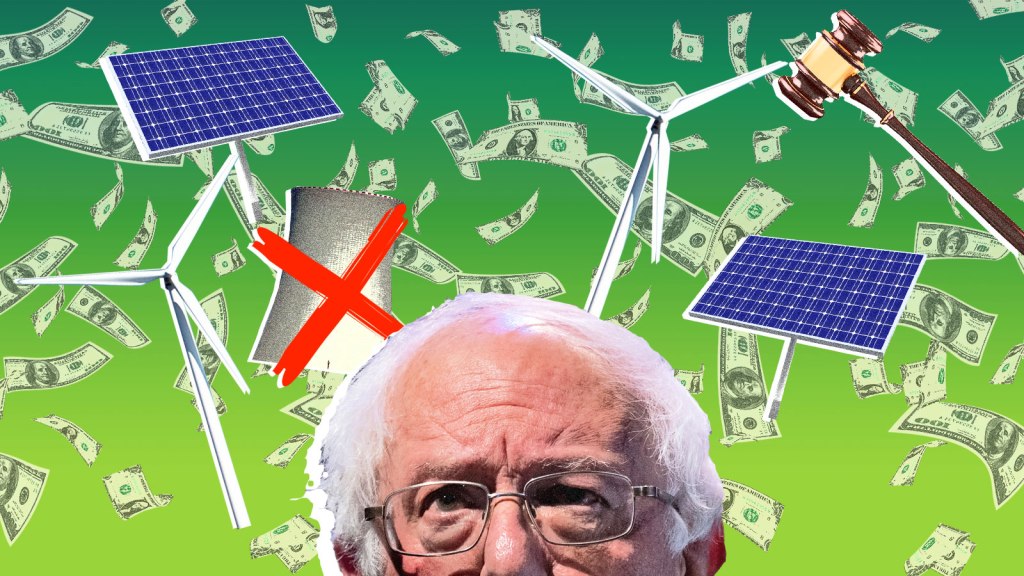 Washington Governor Jay Inslee vacated the role of “climate candidate” in the 2020 Democratic presidential primary when he dropped out of the race Wednesday night. By Thursday morning, it appeared Bernie Sanders was poised to fill it.

The Vermont senator unveiled a plan to spend more than $16 trillion in federal dollars on “a ten-year, nationwide mobilization centered around justice and equity” to forestall the climate crisis. He’s calling it — stop us if you’ve heard this one before — the “Green New Deal.”

Yep, Sanders told the New York Times that he’s putting “meat on the bones” of the resolution, introduced in February by New York Congresswoman Alexandria Ocasio-Cortez and Massachusetts Senator Ed Markey, which called for a “10-year national mobilization” to essentially remake the U.S. into a clean-energy economy. The Ocasio-Cortez and Markey version of the Green New Deal (a.k.a. GND original flavor) is currently being constructed by the think tank New Consensus.

Sanders’ version calls for creating 20 million union jobs he says are necessary for averting climate disaster, phasing out fossil fuels by midcentury, providing $200 billion to the United Nations to aid developing countries in slashing emissions, and spearheading new projects in solar, wind, and geothermal energy. According to the senator’s campaign, the plan will pay for itself in 15 years, in part by levying massive taxes on the income of corporate polluters and increasing penalties for fossil-fuel company pollution. And Sanders said he would declare climate change a national emergency, a step that even Inslee was not ready to commit to. Last month, Sanders proposed a congressional resolution to do just that.

The language in Sanders’s plan indicates he’s ready to tussle with Big Oil: He says he would direct his Department of Justice to go after fossil fuel companies for both civil and criminal penalties. So far, cases winding through the state court systems have not been successful at holding the fossil fuel industry accountable.

“They have evaded taxes, desecrated tribal lands, exploited workers, and poisoned communities,” the proposal reads. “President Bernie Sanders will ensure that his Department of Justice and Securities and Exchange Commission investigate these companies and bring suits — both criminal and civil — for any wrongdoing, just as the federal government did with the tobacco industry in the 1980s.”

The 77-year-old presidential-hopeful also plans to ensure a “fair” and “just transition” for fossil fuel workers. Under Sanders’ Green New Deal, the federal government would provide five years of unemployment insurance, a wage guarantee, housing assistance, and job training to “any displaced worker” who loses their job during the transition to a clean-energy economy.

While the Green New Deal of Ocasio-Cortez and Markey calls for transitioning to 100-percent zero-emission energy generation and slashing emissions from transportation “as much as is technologically feasible” within 10 years, Sanders’ plan ups the ante a bit. He calls for eliminating all emissions from the transportation sector by 2030. And while the original resolution doesn’t exclude the use of nuclear power or developing technologies like carbon capture, Sanders’ proposal prohibits so-called “false solutions,” specifically naming nuclear, carbon sequestration, and geoengineering among them.

But while the Green New Deal (original) and its effect in shifting the conversation on climate in politics has been up to this point most closely identified with Ocasio-Cortez, today’s announcement could essentially transfer the concept to Sanders. So if at the next round of debates, fellow candidate and Senator Kamala Harris utters her support for a “Green New Deal”, as she has in the previous two, she’ll essentially be saying she supports Sanders’ plan. It’s his now — both its transformative allure, as well as its heavy price tag.

But at least, according to Sanders’ estimates, he can get the job done for less than 20 percent of what the Republicans say a Green New Deal will cost.