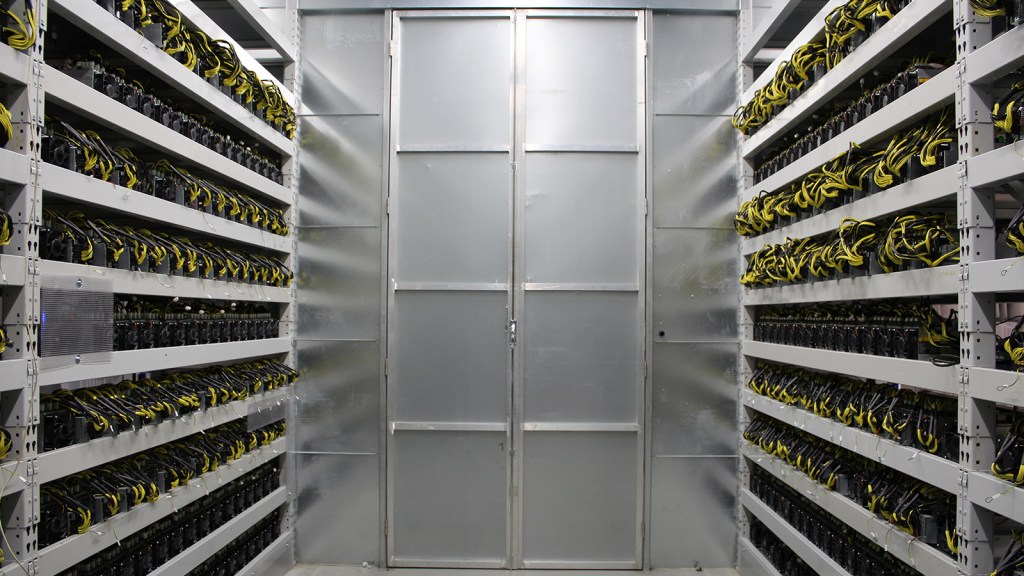 One of the biggest near-term threats to our clean energy future doesn’t even physically exist — but the danger is increasingly very real.

The stupendous growth of the virtual currency Bitcoin is creating real-world consequences. Massive number-crunching computer facilities for mining Bitcoin have popped up in parts of the planet where renewable electricity comes especially cheap. And now it looks like this mining is starting to siphon green energy away from everybody else.

Bitcoin is the best known of countless “cryptocurrencies,” which promise direct, secure financial transactions that don’t require any banks. Since its birth nearly ten years ago, the virtual currency has exploded in popularity. Bitcoin used to be popular for money laundering and drug deals; now it’s accepted at Subway restaurants.

To maintain security as its network grows, the math problems that Bitcoin “miners” must solve are getting ever more difficult. That requires a constant supply of additional computing power, which requires a constant supply of additional electricity. One Bitcoin transaction uses as much energy as a single U.S. household consumes in three weeks, and there are nearly 200,000 transactions around the world every day. In total, Bitcoin now consumes about as much energy as Portugal.

And it’s about to get much, much worse than that. A couple of months ago, I wrote that Bitcoin mining’s rapid growth was unsustainable, because the electricity required to feed it would overtake the supply. In Iceland, that’s starting to happen.

“We are spending tens or maybe hundreds of megawatts on producing something that has no tangible existence and no real use for humans outside the realm of financial speculation,”Smári McCarthy, an Icelandic member of parliament recently told the Associated Press. “That can’t be good.”

Iceland is home to one of the planet’s best natural sources of carbon-free power, thanks to its location: smack atop a hydropower-geothermal geographical oddity.

Corporate giants have taken notice. About 10 years ago, Alcoa, the world’s largest aluminum company, built Iceland’s largest hydroelectricity dam in the middle of one of Europe’s largest wildernesses to capture runoff from Europe’s largest glacier. Smelting aluminum is a particularly energy intensive endeavor, and Iceland’s vast renewable energy resources makes its electricity prices among the lowest in the world.

It’s easy to argue that converting unspoiled wilderness into aluminum is a bad idea. But what about when that power is used to produce a virtual currency? At the end of the day, at least aluminum has real-world value.

Some leading experts believe that the virtual currency could grow in value tenfold by the end of the year — which would, astonishingly, mark a slowdown in growth after its nearly 1,400 percent rise last year.

Speculative bubbles bring out the gamblers. And the promise of turning big payoffs from buying Bitcoin into real-world cash has created a technological arms race among currency miners, a shortage of computers for scientists, and that, in sum, is worse for the environment than gold mining. Worst of all, it’s squandering the world’s renewable energy resources, and not just in Iceland.

After a crackdown on Bitcoin miners in China, they’re hunting for new homes in places where green energy is plentiful and cheap, such as rural Washington state, Paraguay, and Eastern Europe. In hydropower-heavy Quebec, utilities are turning down dozens of requests per day from cryptocurrency miners to set up shop, because there just isn’t enough electricity to go around.

To be sure, there are Bitcoin enthusiasts who argue that this cryptocurrency-imposed shortage of renewable energy could turn out to be a good thing, spurring further growth in renewables at a time when its sorely needed. There’s a small solar-powered crypto-mining operation already up and running in sunny Western Australia, and Europe’s largest utility is preparing plans to cater specifically to miners seeking cheap renewable energy. But the reality is that more dams, wind turbines, and geothermal plants simply can’t be built fast enough to keep up.

This time next year, Bitcoin’s worldwide operations are expected to consume about as much electricity as Sweden, more than twice what they consume today. And in the meantime, our hopes of a low carbon economy are slipping further away.