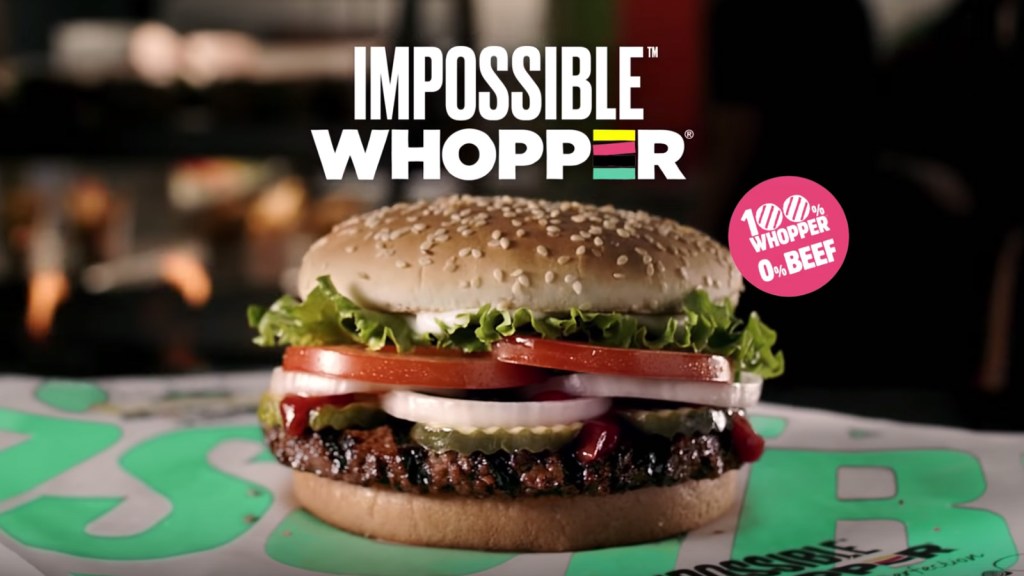 Burger King
not so impossible after all

Burger King, the fast-food giant known for meaty excess, has announced it intends to pilot a fully vegetarian, beef-free version of its classic Whopper.

The company announced on Monday that it will test out plant-based patties from startup Impossible Foods starting with stores in the St. Louis, Missouri area. And thank the flame-broiled Gods, this does not appear to be an April Fool’s Joke. The chain already offers a meatless patty in the form of the MorningStar Farms Garden Veggie Patty, which is made from vegetables and grains. But the more meat-like Impossible Whopper represents a promotion for vegetarian options from sub-in to front-of-brand star.

Fernando Machado, Burger King’s chief marketing officer, told the New York Times of the new Impossible Whopper that even fans who know the traditional beef Whopper inside and out “struggle to differentiate which one is which.”

Plant-based meat substitutes have been gaining popularity as people have become more aware and focused on the environmental woes associated with standard animal-based food systems. Plus, health-conscious customers may be drawn to plant-based options because of their lower cholesterol and calorie counts.

Burger King is the biggest fast-food company to launch a vegetarian-friendly burger option to date, but it’s far from the first. In January, Carl’s Jr. started offering a meatless “Beyond Meat” option at more than 1,000 locations. And the mostly Midwest-based chain White Castle (of Harold and Kumar fame) has been offering a meatless “Impossible Slider” at their nearly 380 locations since September of last year.

Burger King’s “whopper” of a contribution to the meatless fast food landscape is, at least for now, still theoretical. The Impossible Whopper will only be tested in 59 of the company’s approximately 7,200 locations, with plans for broader rollout in the future if the trial goes well.

One potential barrier to the Impossible Whopper’s success is its price tag: the meatless burger will cost about a dollar more than its meaty namesake. But according to Burger King’s North America president Christopher Finazzo, research shows consumers are willing to pay more for the plant-based burger.

And as Impossible Foods gets deeper into the fast food game, it’s possible prices for the popular, plant-based patties could drop.

“Burger King represents a different scale,” Impossible Foods COO and CFO David Lee told CNN. “The only thing we need to be affordable and at scale versus the incumbent commodity business is time and size.”