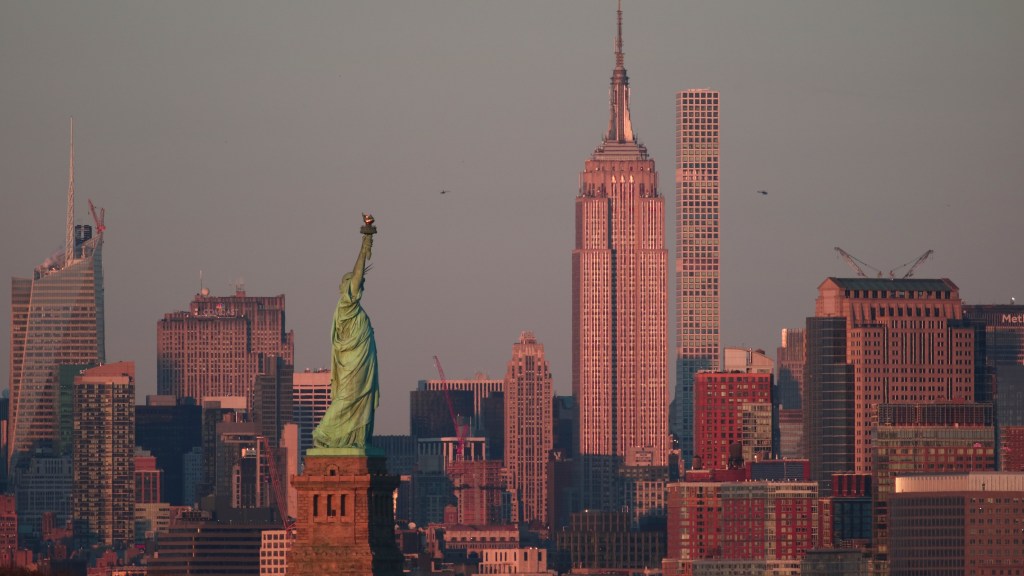 The U.S. East Coast has been provided a firsthand reminder of the deadly California wildfires after smoke swept across the country and caused a haze to envelop the eastern seaboard, including Washington, D.C. and New York City.

Hazy skies were reported in several places on the East Coast from smoke wafting from 3,000 miles farther west, where wildfires in California have killed more than 80 people and razed more than 15,000 homes and other structures.

An unusually dense fog shrouded the top of New York City skyscrapers and the sunset was particularly intense due to the smoke particles in the air. “Wow. I knew tonight’s sunset over New York City seemed different, and I should’ve realized,” tweeted Kathryn Prociv, a meteorologist on the Today Show. “Wildfire smoke is in the air, all the way from California.”

Donald Trump visited the areas affected last weekend and created controversy by refusing to acknowledge climate change as a major factor, getting the name of the incinerated town of Paradise wrong, once again blaming forest management, and arguing for leaf-raking as a key factor in prevention.

Early on Wednesday morning, the former California governor and actor Arnold Schwarzenegger made a surprise visit to firefighters, who have been working exhaustingly long shifts in extremely dangerous, unpredictable conditions.

He served breakfast to officers who have been battling the Camp Fire in Northern California, and criticized Trump for jumping to blame the fires on forest management.

Schwarzenegger, who was California governor from 2003 to 2011, said he was in Hungary when he heard Paradise had been destroyed, and wanted to visit firefighters to show his appreciation for their efforts while they risked their lives.

Satellite imagery released by the National Oceanic and Atmospheric Administration showed a band of smoke curling up from Southern California to Massachusetts. While the diffused smoke can be hard to distinguish from other pollution, it makes a telltale appearance at sunrise and sunset.

The smoke is moving fairly high in the atmosphere but can exacerbate health problems if it settles – D.C.’s air quality was classed as only “moderate” on Tuesday.

This smoky pall is still nothing compared with the situation on the West Coast, where there have been shortages of protective masks in some places. Schools and sporting events have been shut down due to the dire air quality, although San Francisco’s famed tram network has now reopened. The air is expected to improve this week, with rain forecast for Wednesday.

The Camp Fire in Northern California is the deadliest blaze in the state’s history, with 81 confirmed deaths and nearly 700 people still unaccounted for since it broke out earlier this month, with the cause yet to be determined. The fire obliterated almost all of Paradise, a small town close to the Sierra Nevada, and displaced more than 50,000 people. A smaller blaze near Los Angeles has caused three deaths and is now largely contained, but still prompted some dramatic rescues of those stranded by the flames and smoke.