California just got its climate report card and we’re betting the state wants to hide this one from its parents.

The Golden State has been cramming to clean up its greenhouse-gas grades for more than a decade, and Gov. Jerry Brown has pledged to fight President Donald Trump’s efforts to roll back climate action. So when Trump dropped out of the Paris agreement earlier this month, California was all like, “Whatever dude, I’m going to work even harder, and score the winning touchdown, and graduate for all of us!”

To put it another way, California has set lofty goals and now wants to set them even higher.

“There’s support for more aggressive California climate action,” says Meredith Fowlie, an environmental economist at the University of California, Berkeley. “California is determined to step up, particularly as Washington pulls back.”

The problem is, the state has struggled to hit the targets it already set. After psyching itself up to take on the world, California has taken some important steps forward, but it looks like it has also taken a few bong hits and a lot of naps. The Golden State wants to bring its greenhouse gas emissions down to 40 percent below 1990 levels by 2030, but it’s not on pace to get there, according to the state’s annual inventory of greenhouse gas emissions. That target looks so far away, Fowlie says, that it “makes the much-celebrated greenhouse gas emissions reductions we’ve achieved so far look timid.”

Getting the economy off carbon: Great effort! (but not fast enough) 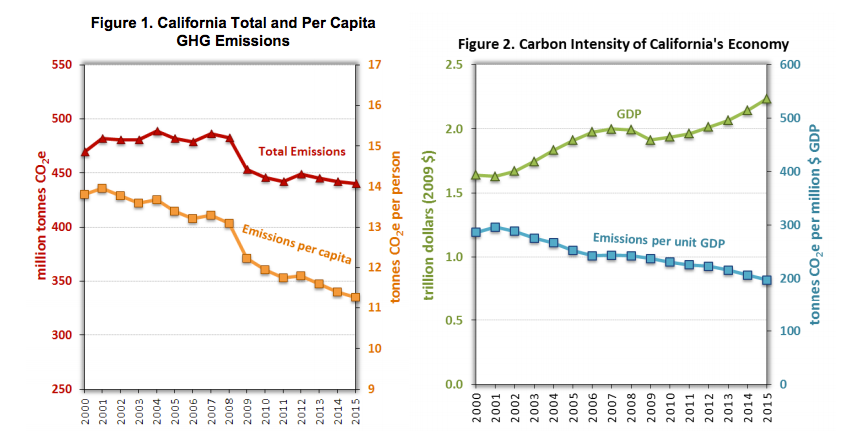 California is bringing down emissions even as the state’s population (39 million and counting) and economy keeps growing. That’s great news as well as a monumental change.

Until recently, an uptick in the economy meant an uptick in greenhouse gas emissions; you couldn’t have one without the other. But now emissions are dropping as California’s businesses boom.

However, the state is still burning more than its share of dinosaur slime. The average Californian still emits more than 11 metric tonnes of carbon dioxide every year, a little over twice the world average. 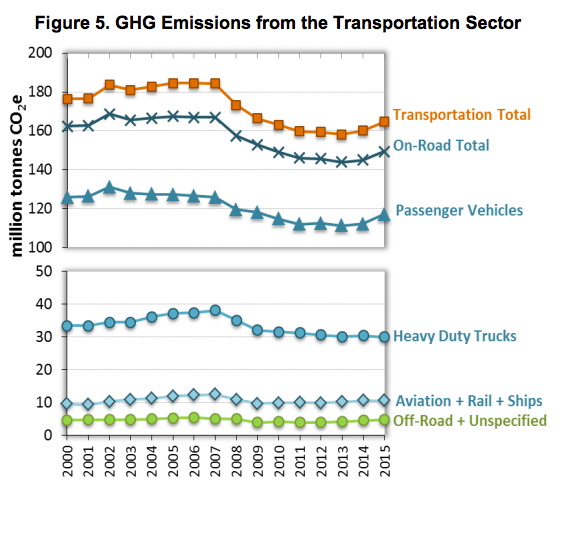 Planes, trucks, cars, and the like are the biggest source of emissions in the state, and their emissions are headed in the wrong direction. That’s because, after years of burning less fuel, Californians are back behind the wheel and most likely sitting in traffic. Cheap gas takes some of the blame.

Sharp-eyed readers will notice a similarity between the orange line above, which tracks total emissions from transportation, and the next graph, which shows how much Americans drive. Hence, Silicon Valley’s dream of a nation getting ferried around in electric-powered self-driving cars. 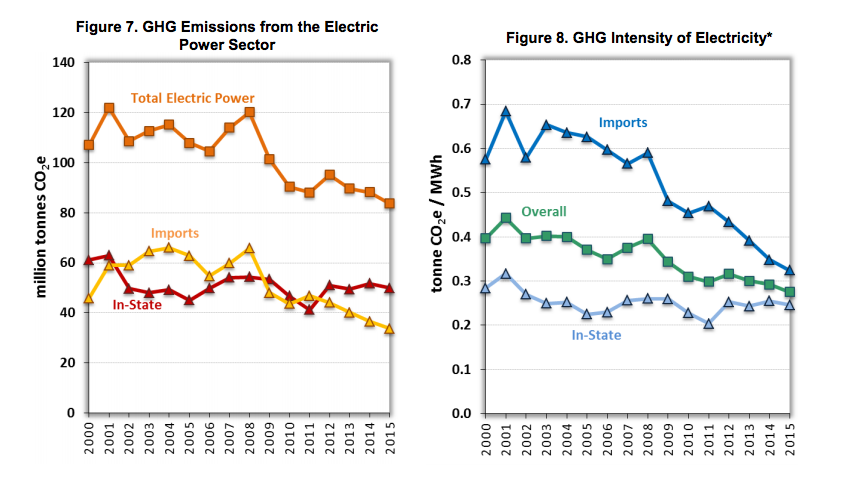 Every year, it takes less carbon to power Silicon Valley’s smartphones, Hollywood’s cameras, and Humboldt’s grow lights. Hooray! It’s not because the technology is getting greener. California is getting more of its electrons from wind turbines and solar plants. But if you look closely at these graphs, you can see that improvement comes from sucking clean electricity away from other states.

California just hasn’t managed to increase the amount of carbon-free electricity it produces in state.

How can this be? It seems like there are new solar panels going up all the time in California. It turns out that all those new renewables weren’t enough to make up for the loss of electricity when the state shut down nuclear plants and droughts shut down hydropower. Another graph (Figure 10) reveals what’s happening: Natural gas has replaced most of the electricity that was coming from dams and nuclear plants. 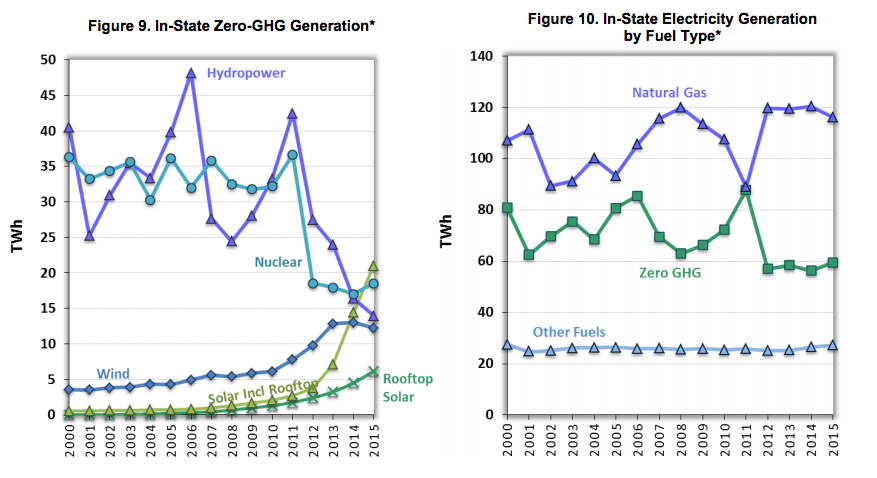 California’s wineries, cement plants, and aerospace companies are mostly just treading water. We could go searching for silver linings here and find some improvement (look, emissions from refineries are falling!) but let’s be real: This is disappointing. 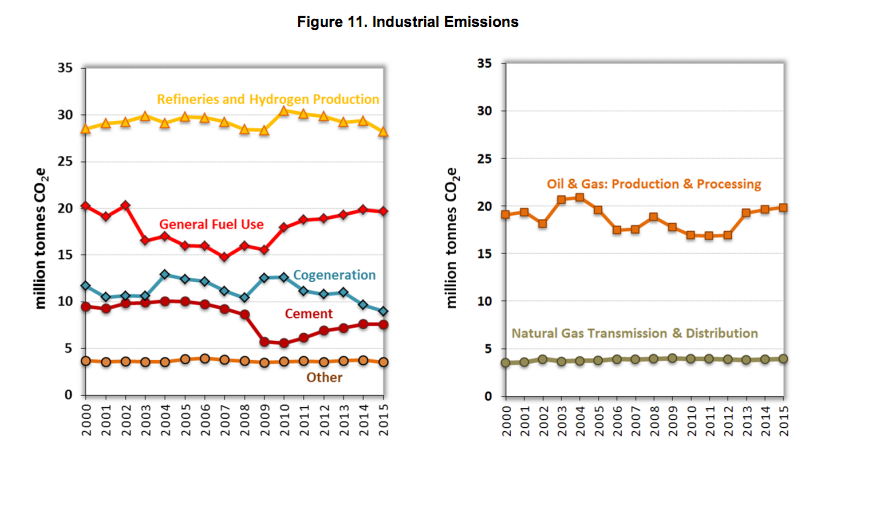 The problem is that most of these emissions come from combustion; that is, industry burns stuff to make other stuff. You’ve got to get limestone really hot to make cement, and you need a fiery forge to turn steel into a Tesla or a BPA-free water bottle. People are starting to figure out more environmentally friendly manufacturing techniques, but they are still new, and therefore really expensive.

(Young California has lots of potential, but hasn’t turned ambition into enough progress)

This may seem like a harsh assessment, but we are measuring the Golden State against its own expectations, not against Wyoming or North Korea. Basically, California is great at making big promises about defying Trump and fighting climate change. It’s not yet good enough at walking the walk.

Not to say that California is all talk. Jeffrey Greenblatt, a scientist at Lawrence Berkeley Lab who has been studying California’s efforts, says the state has made a lot of significant policy changes. Think green building standards, carbon sequestration efforts, and subsidies for electric cars and renewable energy. “The problem is that, even with all that, it’s not quite enough to get us to our targets,” Greenblatt says.

California’s climate team has a plan for upping the pace that depends on getting a new cap-and-trade law passed. A few weeks ago, one cap-and-trade bill failed a key vote. But there’s still time. The state legislature has a Democratic supermajority, and a Governor Moonbeam who cares deeply about climate change.

“We can’t fall back and give in to the climate deniers,” Gov. Brown said in his State of the State speech earlier this year. “The science is clear, the danger is real. We can do much on our own, and we can join with others — other states and provinces, even other countries — to stop the dangerous rise in climate pollution.”

The world needs this well-meaning slacker to turn into a climate valedictorian. One solid session of summer school could put the state on the right trajectory.