California’s battle against climate change is going up in smoke 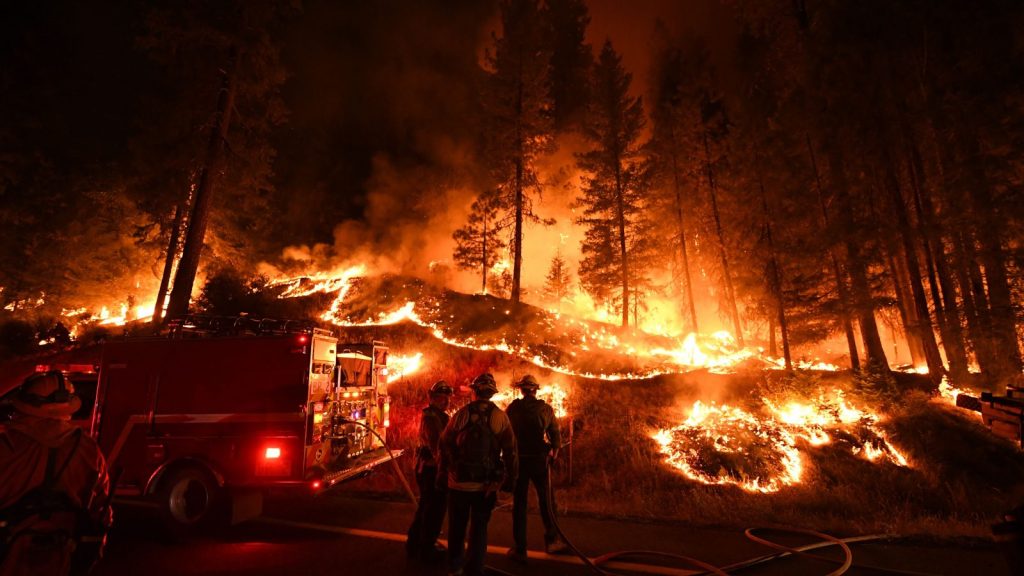 California’s battle against climate change is going up in smoke

Just a few months ago, climate activists in California were celebrating an impressive victory: New data showed that the state had brought greenhouse gas emissions down to 1990 levels, four years earlier than planned. The win, a cut of emissions to 429.4 million metric tons (the equivalent of taking 12 million cars off the road) was the result of steady decreases in emissions most years.

“California set the toughest emissions targets in the nation, tracked progress and delivered results,” Governor Jerry Brown tweeted. The next step was to cut emissions another 40 percent by 2030 — “a heroic and very ambitious goal.”

But by November, skies across the state were gray. Wildfires were raging, including a blaze which would prove to be the deadliest and most destructive in state history. The conflagrations have set California back: The recent Camp and Woolsey Fires, officials say, have produced emissions equivalent to roughly 5.5 million metric tons of carbon dioxide, more than three times the total decrease in emissions in 2015. Recently, the Department of the Interior announced that new data shows the 2018 California wildfire season is estimated to have released emissions equal to about one year of power use.

Of course, wildfires are not new to the West Coast. But the kind of vast, devastating conflagrations seen in California in recent years — this fall’s Camp Fire decimated 153,000 acres in the Butte County area and destroyed almost 14,000 homes — are becoming more common. According to the state’s most recent climate assessment, California could see a 77 percent increase in the average area burned in wildfires by 2100.

All this is bad news for a state committed to decreasing its carbon footprint. But California’s official emissions score will not be affected by the extraordinary amount of carbon released during wildfires this year, because the agency that calculates emissions — the California Air Resources Board — considers wildfires to be a part of the earth’s natural carbon cycle. (The ARB is a regulatory body and, as agency spokesperson Dave Clegern noted, “can only regulate what can be controlled.”)

But the agency is looking into ways to better track carbon emissions from conflagrations. Right now, Clegern says, the ARB uses data including the size of the fire and the kind of fuel burned to estimate its carbon footprint. But, he said, scientists don’t currently have a good way to accurately calculate emissions from disasters like the Camp Fire, which burn residential and commercial properties. While those findings won’t be included in the state’s emissions tally, Clegern said it’s still important to gather the data: “We need to know what goes up in the air when these things happen. Our first mission is to protect public health.”

The increasing size of wildfires in California is driven by several factors linked to climate change, scientists say, including a shift in the jet stream that causes the state to suffer more hot, dry spells. The state’s seven-year drought has weakened forests and left millions of acres highly susceptible to lethal attacks from insects like bark beetle. In recent years, more than 100 million trees are estimated to have died statewide. Dry, dead forests are a fire hazard, and they pose a threat so severe that, in 2015, Governor Brown declared a state of emergency and created a task force to identify areas of particular risk. This January, scientists at the University of California-Berkeley reported that the situation was “compounded by the long-established removal” of naturally occurring, frequent, and low-intensity fires in the state’s forested areas, “a key ecosystem process” in hazardous wildfire prevention.

Aside from preventing deadly conflagrations, protecting forests also means preserving the state’s best tool for regulating carbon emissions. By removing carbon dioxide from the atmosphere and storing it as carbon in soil, branches, and tree trunks, forest have historically worked as a “carbon sink” for the state. But research shows that between 2001 and 2010, tree die-off meant California’s forests emitted more carbon than they sequestered.

Wildfires accelerate this process. Conflagrations release carbon into the atmosphere as they burn and, once the smoke has cleared, leave fewer trees to sequester carbon. In the years following a fire, dead trees begin to release their stored carbon back into the atmosphere. And a recent study also showed that forests which burned at high severity suffered worryingly low regeneration rates. In some places, no trees grew back at all.

But the damage doesn’t end there. When a forest is burned for the first time, “between 5 and 20 percent of the carbon goes up,” explained Nic Enstice, regional science coordinator at the state’s Sierra Nevada Conservancy agency. That’s because even a high-severity fire will not incinerate every tree in a forest. But if a second wildfire ravages through an already-burned area, the dead trees are more readily consumed, resulting in even greater carbon release.

The fire season’s growing effect on the state gives scientists all the more reason to study its emissions. “That’s the kind of issue we’re wrestling with now,” Clegern said.

California’s best hope for reaching its ambitious climate goals may lie in technology and rebuilding the state’s dilapidated forests. The state is relying on energy companies like utility giant PG&E to increase purchases of renewable power and invest heavily in burgeoning industries like electric transportation over the next decade. (PG&E, meanwhile, could be on the hook for billions of dollars in fines if an investigation finds the company’s equipment ignited some of California’s recent conflagrations.) Plans are also underway to push harder on forest restoration efforts: In May, the state announced its Forest Carbon Plan, which included a pledge to double the rate of forest rehabilitation to an average 35,000 acres a year by 2020.

“We know that we have to increase the health of our forests pretty significantly over the coming years,” Enstice said.“What we saw in the Camp Fire, the Rim Fire, the King Fire — these are all out of the normal patterns.”