California's next megaflood would be worse than eight Hurricane Katrinas 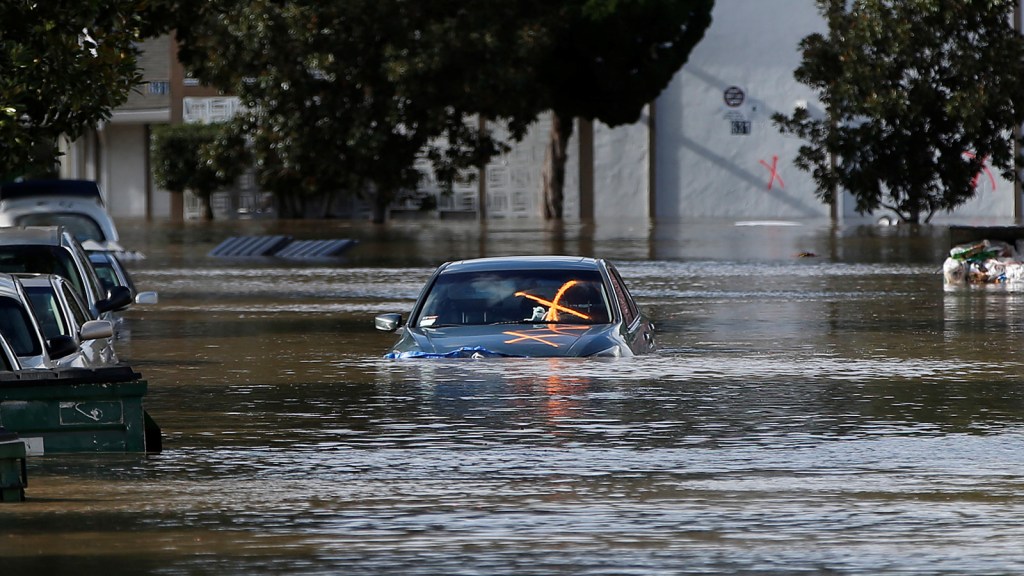 REUTERS/Stephen Lam
the other big one

California’s next megaflood would be worse than eight Hurricane Katrinas

Worse than the 1906 earthquake. Worse than eight Hurricane Katrinas. Worse than every wildfire in California history, combined. The world’s first trillion-dollar natural disaster.

A wintertime megaflood in California could turn out to be the worst natural disaster in U.S. history by far, and we are making it much more likely, according to an alarming study published this week in Nature Climate Change.

The odds are good that such a flood will happen in the next 40 years, the study says. By the end of the century, it’s a near certainty. (And then another one hits, and another — three such storms are possible by 2100). By juicing the atmosphere, extreme West Coast rainstorms will happen at five times their historical rate, if humanity continues on roughly a business-as-usual path, the new research predicts.

The study’s lead author, Daniel Swain, a climate scientist at the University of California, Los Angeles, and a lifelong Californian, says the best way to understand what we’re doing to California’s weather is to think of earthquakes.

“A major earthquake on the Hayward Fault in the San Francisco Bay Area or on the San Andreas Fault east of Los Angeles is an inevitability in the long run, and either event would likely be devastating,” Swain says. “Yet the big difference with the risk of a major flood event is that human activities are greatly increasing the likelihood of the physical event itself through the emission of greenhouse gases.”

Three years ago, much of the Pacific Northwest sat in stunned silence after reading Kathryn Schulz’s Pulitzer-winning description of “the really big one” — an unimaginably huge earthquake, a full-margin rupture of the Cascadia subduction zone. Within months of that article, Congress held hearings and proposed new funding to prepare.

California’s looming megaflood would likely be much worse.

In terms of sheer destruction, displacement of human life, re-ordering of society, a California megaflood would be without parallel in modern U.S. history. The state’s levees aren’t designed to attempt to hold back such a flood. The blow to the world’s sixth largest economy would send shockwaves throughout the world.

On his blog, Swain wrote: “Climate scientists are sometimes accused of being ‘alarmist,’ but I would argue that alarm is a reasonable human response.”

In 2011, the USGS assessed the modern-day implications of a flood like the one that happened in the winter of 1862 — currently the worst flood in California history. An unceasing onslaught of atmospheric rivers brought Los Angeles three years worth of rain, more than 36 inches, in a month and a half. Floodwaters turned California’s Central Valley into an inland sea, from Bakersfield to Redding. When it was all finished, the storms had destroyed one-third of the taxable land in California, and bankrupted the state.

Swain’s research considered the consequences of these megafloods on the state’s water management system and found the signs of catastrophe:

[S]uch events would be unprecedented in California’s modern era of extensive water infrastructure. Few of the dams, levees and canals that currently protect millions living in California’s flood plains and facilitate the movement of water from Sierra Nevada watersheds to coastal cities have been tested by a deluge as severe as the extraordinary 1861–1862 storm sequence—a repeat of which would probably lead to considerable loss of life and economic damages approaching a trillion dollars.

And, deep breaths, this isn’t the worst-case scenario. It is “plausible, perhaps inevitable”, according to the USGS, that a flood even worse than the 1862 disaster will occur again. The USGS called their scenario the “ARkStorm” — a thousand-year megastorm — and made a stark warning: “The hazards associated with such extreme winter storms have not tested modern infrastructure nor the preparedness of the emergency management community.”

For California, it looks like the worst of climate change is just getting started.