Climate activists may have a surprising ally: France's Yellow Vests 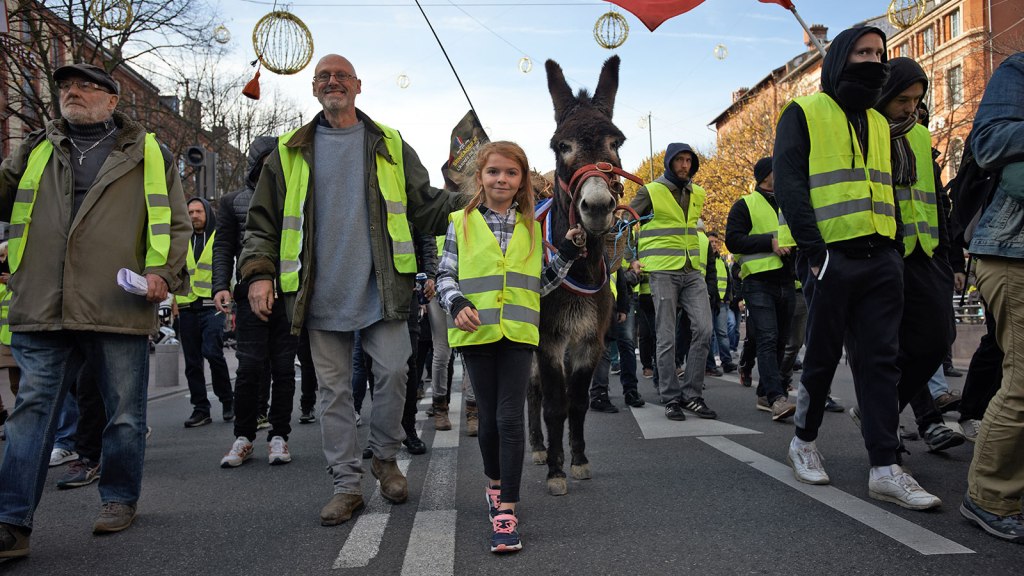 Climate activists may have a surprising ally: France’s Yellow Vests

Samantha Harvey is a writer and fellow with EDGE Funders Alliance, an organization that works to raise awareness of the connections between social, economic, and ecological problems.

When tourists began their annual flock to Paris for vin rouge and holiday shopping last month, a rag-tag, politically unaffiliated group donning yellow safety vests showed up with different plans. A proposed fuel tax, seen as another blow against workers by a government in thrall to elites, set off a rampage in the most elegant streets of Paris. The “Yellow Vests” protests (gillets jaunes) continued for weeks and sparked solidarity marches across Europe, even after President Emmanuel Macron promised to halt the tax.

Thousands of miles above the demonstrations, world leaders flew to the U.N. climate talks known as COP 24 in Katowice, Poland to solidify the 2015 Paris Accord. President Trump jumped on the opportunity to scapegoat efforts to tackle climate change as the Yellow Vests’ motivation, tweeting, “Maybe it’s time to end the ridiculous and extremely expensive Paris Agreement. The Paris Agreement isn’t working out so well for Paris.”

The Yellow Vests, however, are concerned about the climate, despite their protest of a fuel tax, and their list of 42 demands calls for a fairer transition to a low-carbon economy for workers. Their issue is  with how it’s done, while Trump’s view casts climate change as a preoccupation of the privileged, an either-or struggle between the environment and the economy.

The fact is, global climate justice activists push for both — a transition to a green economy that also demands fair pay, localized ownership and care for communities as integral parts of a cleaner world — all proposals in line with the Yellow Vests’ demands. A healthier planet requires an overhaul of our economic system, and workers collaborating with climate justice movements would be doubly powerful. But the connections between them aren’t widely known.

This could be due to the fact that the high-profile decision-makers meeting in Poland don’t represent the entirety of the climate movement. Only weeks after the most alarming Intergovernmental Panel on Climate Change (IPCC) report yet (calling for emissions cuts of 45 percent below 2010 levels in the next 10 years), world leaders seemed unable to think beyond business-as-usual proposals that allow us to keep pumping carbon into the atmosphere, like carbon trading and geoengineering.

To climate justice activists, who draw from bottom-up solutions rooted in communities hardest hit by climate change, these proposals are non-starters, because they avoid addressing underlying causes of the crisis: Unfettered capitalism built on resource extraction and colonialism, and an addictive, globalized culture of consumption that supports the very leaders of government and business running the U.N. climate negotiations.

The large and growing movement for climate justice focuses on these root causes and pushes for worker-friendly, equitable solutions in climate negotiations worldwide. Take the Global Climate Action Summit last September in San Francisco. Just outside that summit was the parallel “People’s Summit,” held on a glorious day before ash from wildfires blanketed the state. Leaders from Climate Justice Alliance, Grassroots Global Justice, Indigenous Environmental Network and Right to the City Alliance shared stories of displacement as the result of multinational corporate land-grabs, of neighborhoods burdened by pollution from power plants, and of increasingly violent repercussions against those who try to protect their ancestral homelands.

But those at the top only benefit when populist groups like the Yellow Vests don’t see just how aligned they are with climate justice. This is why it’s still uncommon to hear the economy and the environment discussed as interconnected problems with interdependent solutions, and why high-level climate conferences continue to churn out lax commitments that maintain the status quo.

Can we imagine a green world in which workers make decisions for how they live? As income gaps increase, as jobs are lost to automation and oil and gas facilities are shut down, it seems obvious that governments and communities should train and deploy legions of skilled workers to build a new, green infrastructure. This could be anything from emissions-free light rail lines that run across North America to local microgrids and urban agriculture. Breaking up the monolithic global corporations that control our fuel and food would change the system; a transition to a new economy would put power back into the hands of the people.

These ideas have been alive in the Just Transition movement in the United States for decades, and they’re making headway thanks to the Green New Deal recently proposed by Representative-elect Alexandria Ocasio-Cortez from New York. This just transition would cut greenhouse gases while bringing jobs, security and autonomy back to communities, ensuring everyone has access to a good education, clean water, healthy food and safe living conditions.

At the time of this writing, the Yellow Vests are splintering, with protests spreading across Europe and more radical factions acting out with violence. We’ve seen rising populism all over the world devolve into outlets for rage, often taking dangerous racist and nationalist tones. To stop that destructive cycle, Yellow Vests and climate justice activists must make common cause.

Corporate interests may dwarf them now, but imagine if these two movements came together. They’d be unstoppable.

Samantha Harvey is a writer and fellow with EDGE Funders Alliance, an organization that works to raise awareness of the connections between social, economic and ecological problems and advocates for global climate justice.