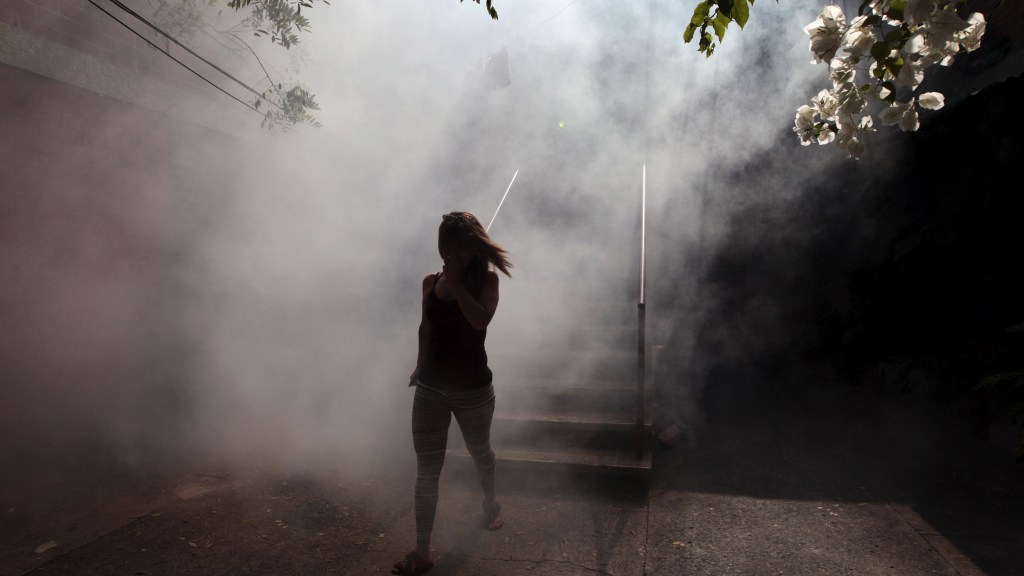 A woman walks away from her apartment as health workers fumigate as part of preventive measures against the Zika virus in Soyapango, El Salvador REUTERS/Jose Cabezas
Climate & Energy

In an unprecedented move, officials in El Salvador are urging women to stop getting pregnant until 2018. This comes in response to the recent outbreak of Zika virus, which has infected more than a million women in Latin America and the Caribbean. The virus causes microcephaly, a neurological condition that causes babies to be born with small heads and brains, and thousands of babies born recently in the Americas have been affected. While officials in several nations, including Colombia and Ecuador, have urged woman to delay getting pregnant by a few months, El Salvador’s two-year recommendation is extraordinary.

“I can tell you that I have never read, heard or encountered a public request like that,” David Bloom, a professor of economics and demography at the Harvard School of Public Health, told The New York Times.

But could this be just the beginning? And could climate change be to making the problem worse? Zika is spread by mosquitoes — mosquitoes whose range increases as the temperature does. Author and activist (and Grist board member) Bill McKibben looks at Zika, climate change, and pregnancy warnings in a new column in The Guardian. He writes:

Think about that. Women should avoid the most essential and beautiful of human tasks. It is unthinkable. Or rather, it is something out of a science fiction story, the absolute core of a dystopian future. “It is recommended that women postpone – to the extent possible – the decision to become pregnant until the country can move out of the epidemic phase of the Zika virus,” the Colombian health authorities said, adding that those living in low altitude areas should move higher if possible, out of the easy range of mosquitoes.

And now think about the larger, less intimate consequences: this is one more step in the division of the world into relative safe and dangerous zones, an emerging epidemiological apartheid. The CDC has already told those Americans thinking of becoming pregnant to avoid travel to 20 Latin American and Caribbean nations.

Eventually, of course, the disease will reach these shores – at least 10 Americans have come back from overseas with the infection, and one microcephalic baby has already been born in Hawaii to a mother exposed in Brazil early in her pregnancy. But America is rich enough to avoid the worst of the mess its fossil fuel habits have helped create.

Lucky for us, right? While we might be responsible for increasing temperatures around the globe, pandemics tend to happen in less-developed nations, where infrastructure is poor and health care limited. Here in the U.S., we may hear news stories about calamities like Zika or Ebola — and we may even panic about them, discuss quarantining visitors and closing our borders — but the reality is, Bill McKibben is right: America is rich enough to avoid the worst of the mess.

But still, despite our wealth — and, so far, our luck — America is part of the global ecosystem: Zika — and climate change — may seem far away now, but this virus is just the latest reminder that while we may be lucky, we’re hardly immune. “We’re in an emergency,” McKibben writes, “one whose face morphs each week into some new and hideous calamity.” The question is, what are we going to do about it?