Within a day of Rex Tillerson’s swearing in as secretary of state, the State Department’s climate change website began to change. The changes signal a shift away from leading international climate actions that the Obama administration pursued and a pivot toward a more passive role.

The Environmental Data and Governance Initiative tracked the changes to the Office of Global Change web page and shared them with Climate Central. They are the first changes to the State Department site documented by EDGI after Tillerson took over on Feb. 1, according to Toly Rinberg, a researcher who helps coordinate EDGI’s Website Tracking Team. 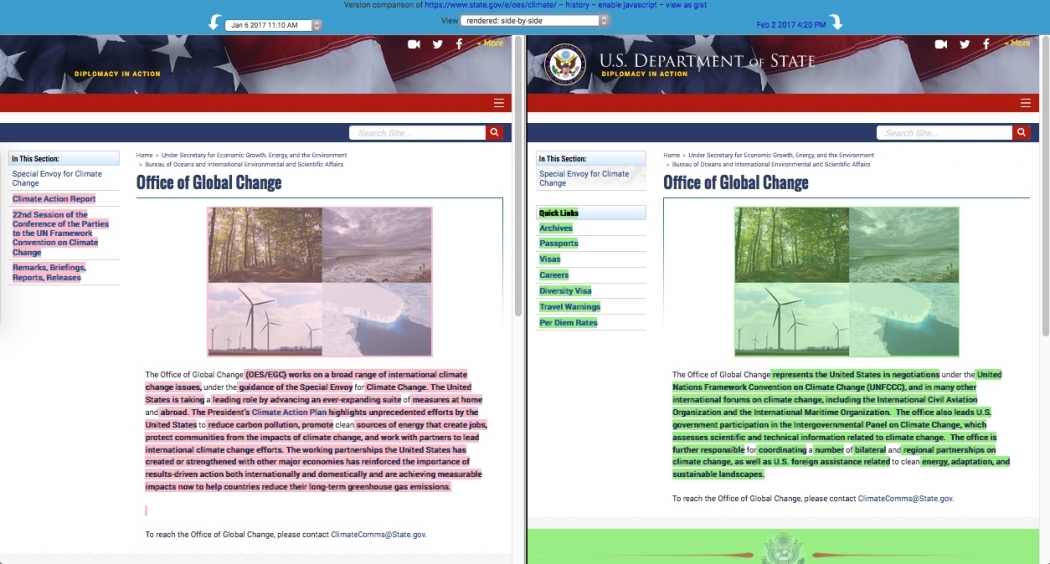 Changes were made to the State Department’s Office of Global Change web page shortly after Rex Tillerson was sworn in. The image on the left shows it in its Obama-era format. EDGI

Nearly the entire description of the office was changed.

Deleted from the text was: “The United States is taking a leading role by advancing an ever-expanding suite of measures at home and abroad.” Also stricken were references to mitigation efforts and other mentions of leading on climate change.

In its place is more generic language, solely referencing that the office represents the U.S. at the United Nations Framework Convention on Climate Change and other international forums. It does use the word “lead” once, but only saying the office leads the U.S. government in participating with the Intergovernmental Panel on Climate Change.

The new language does note foreign assistance for clean energy and adaptation. The addition of adaptation language mirrors changes to the Environmental Protection Agency’s website.

Other changes to the page that occurred prior to Tillerson’s swearing in include paring down the sidebar menu that had links to reports and statements about climate change that included how the U.S. was addressing its international climate commitments.

On their own, they are small changes and are to be expected with any new administration. But they didn’t happen in a vacuum, and taken with other actions, they offer insights into America’s climate change strategy abroad.

The G20 finance ministers recently axed climate finance from a communique under U.S. pressure, a move that business leaders promptly decried. That stands in contrast to the 2016 communique, when G20 finance ministers lauded the Paris Agreement and pledged to provide assistance to developing countries for clean energy and adaptation projects through mechanisms such as the Green Climate Fund, which aims to raise $100 billion by 2020.

President Trump’s 2018 budget proposal also represents a major departure from recent years. The blueprint slices more than $10 billion off the current State Department budget, including zeroing out U.S. commitments to the international climate process and funding. That’s in addition to cuts into clean energy innovation and domestic climate programs (though the final budget passed through Congress will likely look different).

In a letter to State Department staff, Tillerson endorsed shrinking the budget.

“It acknowledges that U.S. engagement must be more efficient, that our aid be more effective, and that advocating the national interests of our country always be our primary mission,” Tillerson wrote, according to the Washington Post. “Additionally, the budget is an acknowledgment that development needs are a global challenge to be met not just by contributions from the United States, but through greater partnership with and contributions from our allies and others.”

What happens to the Paris Agreement itself will be perhaps the strongest signal of how the U.S. approaches climate change on the international stage. Reports indicate that presidential advisor Steve Bannon and the more populist faction of Trump’s inner circle want the U.S. to exit the agreement, which Trump said he would “cancel” during the campaign.

Another faction of the White House is in favor of staying in the Paris Agreement, of which Tillerson is likely a part. During his testimony before the Senate Foreign Relations Committee, he said, “I think we’re better served by being at that table than leaving that table,” though he also puts the brakes on a bit by noting “as we commit to those accords, are there any elements of that that put America to a disadvantage?”

Any changes to how the U.S. acts — or doesn’t act — on climate change come at a crucial time for the world. The planet just endured its third straight year of record-setting heat, and 16 of the 17 hottest years have all occurred since 2000.

While renewable energy investments are at an all-time high, there’s still a vast amount of work the world will need to do to shift away from fossil fuels and avoid the worst impacts of climate change. What role the U.S. plays in that remains to be seen.

Arctic sea ice peaks in the winter. For the third year in a row, it’s at a record low.