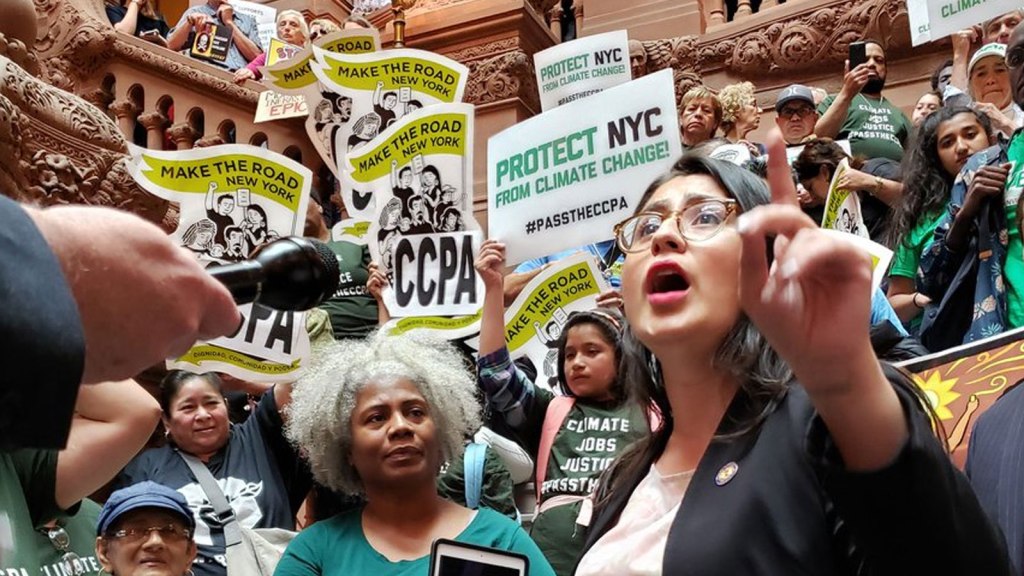 On Tuesday, hundreds of protesters stormed the halls of the New York State Capitol building in Albany, filling the lobby, the staircases, the space outside Governor Andrew Cuomo’s office. Their voices echoed off the stone walls. Several elected state representatives joined organizers to cheer on the gathered crowd: We agree. We’re on your side. Let’s pass this bill.

New York State’s climate policy is at a turning point. For the first time in three years, the Climate and Community Protection Act, or CCPA, actually stands a real chance at becoming law. The comprehensive piece of climate reform, which has been around a lot longer than the much-discussed national Green New Deal resolution, has passed the Assembly three years in a row, but was repeatedly blocked by Republicans at the state Senate-level. But now, both state legislative bodies and the governor’s mansion are all controlled by Democrats.

The act is a broad spectrum environmental plan, similar to the Green New Deal in that it includes both environmental justice initiatives and economic goals. Among its many components, the bill aims to move the state’s economy to 100 percent renewable energy by 2050, invest 40 percent of clean energy funds in disadvantaged communities, and provide higher wages for environmentally-friendly jobs.

There is far-reaching support for the legislation, both in and beyond Albany: The state’s two U.S. senators, Chuck Schumer and Kirsten Gillibrand (also a 2020 candidate) both endorse it. New York Congresswoman and progressive darling Representative Alexandria Ocasio-Cortez, who co-sponsored the national Green New Deal, is on board. And a coalition of 170 environmental organizations and labor unions in NY State have also backed the bill. With just six days left in New York’s legislative session — and with a spate of dire, high-profile scientific papers kicking the climate movement into overdrive — more than 400 protesters descended on Albany Tuesday demanding Governor Andrew Cuomo take action on the CCPA this term.

Meanwhile, Cuomo has appeared on two different radio shows and said that he doesn’t consider passing the CCPA as a priority compared to other legislation still on the table this session.

“The climate change [bill] they’re talking about, which we’re negotiating with the legislature, actually doesn’t do, in my opinion, any of the main goals or main initiatives,” Cuomo said last week on WAMC Northeast Public Radio. “It talks about distribution of funding for environmental projects, how many should go to what they call ‘environmental justice,’ lower income communities, how much should go to other communities. And I believe we’ll pass the bill or we could pass the bill. But our climate change agenda is the most aggressive in the country and it has nothing to do with the bill that’s pending.”

To Arielle Swernoff, the communications coordinator for New York Renews, a coalition of more than 150 advocacy groups that support the CCPA, Cuomo’s comments isolate him from many other members of his party. “That is confusing to us because we have majority support in the assembly, majority support in the Senate, 180 organizations across NY state, all ready to get this done,” she said.

While’s Cuomo doesn’t seem to be gung ho on the CCPA, he is working on a climate solution of his own. In January, he baked his own version of a Green New Deal into the state’s budget plan, which also has yet to be passed. His proposal shares some DNA with the CCPA, but the proposals for moving away from fossil fuels are less ambitious. And while Cuomo’s proposal targets re-envision where the state gets its electricity, the CCPA is focused on New York State’s entire economy.

Another key difference between the CCPA and Cuomo’s budget proposal: The former includes a wide-reaching commitment to environmental justice. The plan dedicates 40 percent of its investment of clean energy funds into disadvantaged communities, Swernoff noted. “These communities have often suffered disproportionately from lapses in environmental care,” she said, “so it is especially important they receive investments in renewable energy, good jobs, and training.”

According to a spokesperson for the Governor, Cuomo sees the CCPA, as it is currently written, as goal-focused, versus his own budget proposal plan which focuses on implementation.

“I’m not going to play politics with it and tell people we’ll have a carbon-free economy by tomorrow, because we won’t,” Cuomo said on the Brian Lehrer show last week.

The Governor’s office declined to comment on the ongoing negotiations surrounding the bill, and didn’t address questions from Grist about the 40 percent reinvestment in disadvantaged communities — a figure that organizers say has become a specific point of contention.

A few hours into their storming of the Capitol, protesters thought they heard Cuomo in his office and chanted for him to come out. Dozens of people staged a “die-in” outside the glass doors. Eventually, six state troopers stationed themselves outside the office, separating it from the people gathered. (In an email obtained by Grist, the Sunrise Movement, a youth-led climate action organization, had sent a call out ahead of the protest asking for the names of people on its mailing list who were prepared to be arrested.)

To Swernoff, the governor is sending mixed signals. “According to Gov Cuomo, the CCPA both does nothing and also is too ambitious to be feasible,” she said.

“The truth is we must get our state off of fossil fuels, we must do it in a just and equitable way, and we must do it backed by the force of law,” she continued. “That’s what the CCPA does, and we need to get it done this year.”