One cool September day, I visited a fish hatchery in Sweet Home, Oregon, a lumber town in the foothills of the Cascades east of Corvallis. I was there to see the year’s final holding of spring Chinook salmon collected, spawned, and ultimately were tossed into a local creek as “stream enrichment:” fertilizer for the ecosystem. I would follow them up the highway as they were delivered to a small tributary of the South Santiam River that had lost its wild fish and thus, for decades, been starved of the important nutrients that salmon gather at sea.

When I arrived at the hatchery, a group of teenage volunteers from Sweet Home High was busy helping technicians with the harvest of sperm and glowing, orange eggs to spawn the next generation of salmon fry. This miracle of procreation, orchestrated by hand in a few hundred square feet with the aid of knives, once occurred across hundreds of stair-stepped, free-flowing miles of tributaries along the upper South Santiam, which eventually flows to the Willamette River, the Columbia, and then the Pacific. But in 1968, a dam was built above the hatchery, which prevented natural salmon runs from reaching these beautiful spawning waters naturally. 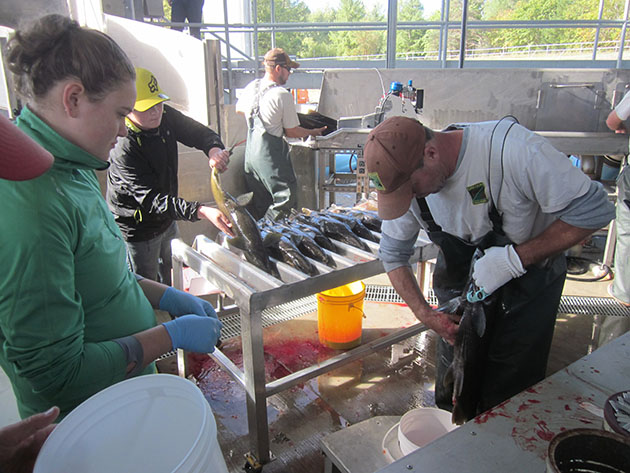 Today, on average, only about 200 wild salmon are tanker-trucked around the reservoir each year by the Oregon Department of Fish and Wildlife (ODFW) to breed in the upper watershed — a relic of former times, a pittance. This presents a conundrum, because we’ve learned that salmon play a crucial role in keeping forests healthy. When they die, their bodies decompose along banks, where the tree roots and creatures absorb their fertile nutrients. Nitrogen, especially, is a key gift to forests, because it’s needed for both chlorophyll, which is essential to photosynthesis, and nucleic acids, which are found at the heart of every cell.

Within 80 feet of the streams where salmon nest and decompose, tree-growth rates can be triple that of nearby salmonless rivers. This accelerated tree growth is important because it means bankside groves will require far fewer years to produce — or reestablish — large trees critical to the health of salmon runs. A vigorous canopy shades streams, optimizing temperatures for eggs buried in gravel nests, called redds, and also prevents erosion, which can clog the interstices in the gravel that deliver oxygen to embryos. Leaves that fall into the stream feed insects, which salmon young then devour. Moreover, trees drop branches and ultimately topple into streams, where they form logjams that slow water, and so catch and retain gravel for spawning. The larger the trunk, the better to withstand annual and periodic floods, and behind them, adult and juvenile salmon can find shelter from torrents or everyday current. In this way, fish carry the health and rehabilitation of their own habitat on their backs, in their very being. They spur new canopy and large woody debris that their own brood and future generations depend on.

Because of logging, dams, and now climate change, however, the wild salmon populations in the Northwest are a fraction of what they were. They navigate just 40 percent of their historic range. In Oregon, only 12 percent of historic numbers still exist, which means forests aren’t receiving close to the nutrients they once did. Plenty of artificially raised salmon return to hatcheries, however, and these excess fish are terrifically ripe — quite rotten — for the tossing. In 2016, ODFW threw some 33,000 carcasses into creeks. In Washington, about 39,000 carcasses were hurled in 2016, and nearly 1.7 million have been dumped in the state since 1995. Carcasses are so essential to the carrying capacity of streams that, in places like Idaho, where the runs are especially beleaguered and fewer excess fish are available from hatcheries, biologists have experimented with carcass “analogs:” sacks of nutrients (remainders from commercial fish factories, and more) that slowly dissolve, mimicking a genuine carcass. 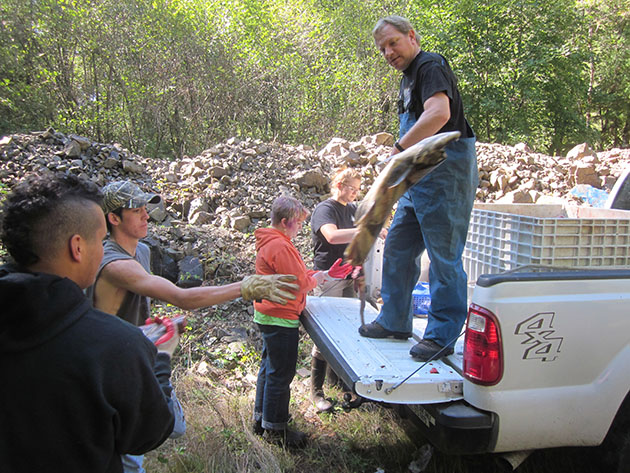 Students look on as US Forest Service hydrologist Lance Gatchell prepares to fling a carcass off a bridge above the Soda Fork. Nick Neely

But we had the real, leaky thing at the South Santiam Hatchery: 290 salmon, two giant totes worth. Before noon, Karen Hans and Lance Gatchell arrived to pick up the dead fish and caravan upriver with the little white school bus carrying the teenagers. Gatchell is a hydrologist and fish biologist for the Sweet Home Ranger District of the Willamette National Forest. Hans is an ODFW STEP biologist — Salmon and Trout Enhancement Program. A forklift loaded the totes onto Hans and Gatchell’s truck beds, and we drove off toward the fishes’ next, if not final, resting place: Soda Fork Creek. We pulled over along a ferny bank, and Hans, much practiced, gave a demonstration of proper chucking technique. Spearing a heavy fish, she swung it up in front of her. Then, with the torque of an ice skater, she pivoted the fish around and behind her, and let it fly. There was a splash down below. One by one, the students picked up spears and followed suit.

Led by Gatchell, the Forest Service had earlier performed a “tree tipping” restoration in Soda Fork Creek. Towering, living trees had been pulled down into the stream by bulldozers with cables, as if they’d naturally fallen. All along the stream, piles of three or four Douglas fir lay across each other like a monstrous game of pickup sticks. These “trash racks,” as Gatchell dubbed them, already were catching other woody debris, becoming a basket weave of fallen forest. Eventually they would net fish, too: Studies have shown that logjams dense with sticks and branches are the best sieves for carcasses, snagging and holding them. Keeping those nutrients in the forest, and so in the family.

The fish that landed directly in the stream were funneled below one of these logjams and collected in a translucent pool, where they would stay, for now. But eventually, the dead would vanish: Within hours of the carcasses’ arrival, crawdads would discover them and prod and begin to saw. After a month submerged, more than 40 percent of each fish’s bulk would leach away imperceptibly. Aquatic insects would nibble, a hoary white microbial layer would claim its skin. Downstream, a schmear of algae and bacteria fueled by the rotting fish would burgeon on underwater rocks. In turn, aquatic insects would boom, up to eightfold. Though there weren’t wild salmon in Soda Fork just yet, steelhead — a giant sea-run trout in the same genus — had returned. Last year’s brood would feed directly on the pale shreds of their distant relations.

Despite the teenagers’ strength, some of the carcasses landed shy of Soda Fork and were left marooned, as if by receding water, on the cobble island built up behind the trash rack. No one was sweating these errant tosses: Carcasses are naturally dragged onshore. In some places, bears devour about half the carrion and scatter it — with an emphasis on scat — throughout the riparian zone. Where fish are plentiful, bruins consume only the most delectable cuts and offer the rest to smaller, but not lesser, scavengers: raccoons, weasels, otters, eagles, vultures, ants, beetles, spiders, mites, slugs, the worms curling under the decay, and flies, forever flies. In turn, these animals scatter the salmon widely as they die. 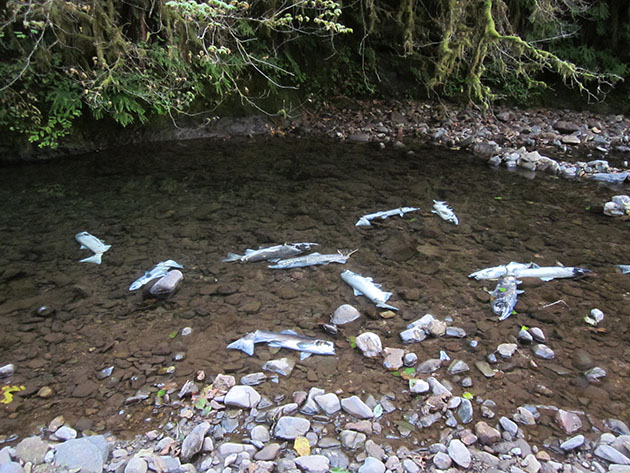 Salmon carcasses collect in a pool in Moose Creek, another tributary of the South Santiam River. Nick Neely

One more stop, at a concrete bridge a quarter mile upstream: “Okay, listen up everybody,” said Hans, above the chatter and purr of the creek. “We’re going to pull out this tote, and we’re going to dump it over the side. You guys are familiar with energy drinks like Red Bull and Rockstar? Well, what’s in this tote is like an energy drink for the creek. All these nutrients are ready to go into the food chain.” Inside the white tote was a raspberry-colored juice that had oozed from the fish, along with bits of flesh, stray tails, and black scraps of liver and kidney. Karen and four boys poured the bloody contents of the tote over the bridge’s rail. The ruby cascade fell 40 feet to Soda Fork, and a chorus of “ohhhs” and “ewwws” rose up from the bystanders. We boarded the bus and raced that Red Bull back to school as we drove the 20 miles west to Sweet Home.