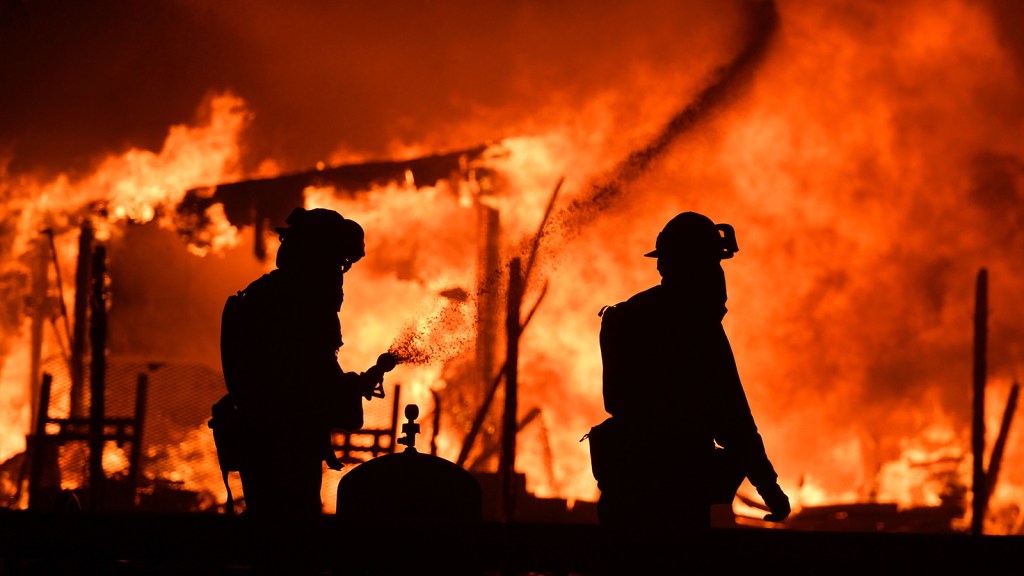 It’s peak wildfire season in California, and Monday was one of the worst days in state history. More than 60 blazes are currently underway statewide.

At least a dozen wildfires sprung up Sunday night in and around Napa and Sonoma counties — also known as “wine country,” just north of San Francisco — prompting rushed evacuations of more than 20,000 people. In an attempt to speed the flow of relief and firefighting equipment and make the National Guard available, Governor Jerry Brown has declared a state of emergency.

The Northern California firestorm has quickly burned nearly 100,000 acres, and is encroaching on neighborhoods in several places. At around 3 a.m. Monday, a Cal Fire official told a local television station that there was “no hope of containment right now.”

1st images from space this morning of the devastating fires in the North Bay. The amount of smoke is unbelievable #napafire pic.twitter.com/fuuBeiwlSo

In total, the fires have killed 13 people and destroyed more than 1,500 structures as of Tuesday morning, making them some of the most destructive in state history. More than 100 people have been treated for burns and smoke inhalation at regional hospitals, according to the San Francisco Chronicle, and more than 150 people are still missing. Nationwide, this year’s fire season has cost more than $2 billion, the most expensive on record.

Smoke from the fires is visible from across the Bay Area, with many residents reporting the smell of smoke and even ashes falling from the sky. The National Weather Service says that winds at higher elevations in some parts of Sonoma County exceeded hurricane force, with several areas reporting gusts greater than 50 mph.

Several of the worst wildfires in California history have sprung up during October, near the end of California’s months-long dry season. It’s this time of year when a combination of strong offshore winds and low humidity can quickly fan a seemingly innocent spark into a raging inferno.

These winds are usually formed by a strong inland high pressure center, which pushes air down mountainsides and through canyons, causing it to warm up and dry out — a perfect environment for fast-growing fires. In Northern California, they are generally called “Diablo winds,” after Mt. Diablo in the eastern Bay Area. A 2015 study said that climate change is making these wind events more frequent and more severe in California. According to the Bay Area branch of the National Weather Service, conditions will begin to improve starting on Tuesday morning.

Incredible video of patients being evacuated from Kaiser Hospital in #SantaRosa #NapaFire pic.twitter.com/cxF686RSnP

One particularly frightening fire in Northern California, the Tubbs fire near Santa Rosa, jumped the 101 freeway, forcing a hospital to evacuate its patients. Officials report evacuation centers that have been set up have already filled to capacity. Aerial images of Santa Rosa on Monday showed widespread devastation of entire neighborhoods.

This post was updated on Oct. 10 to include revised figures on the number of fires and death toll.