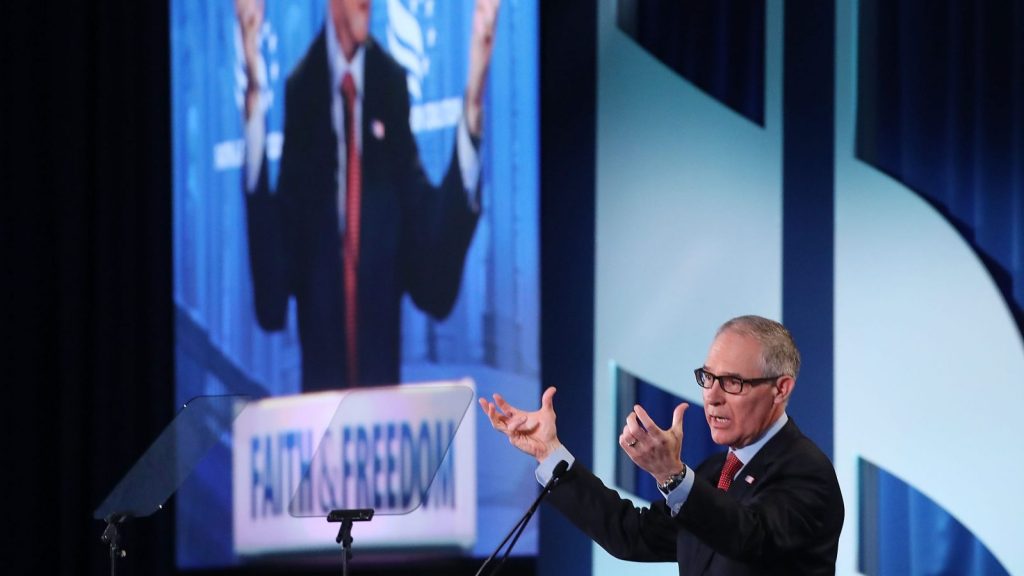 In 2007, the Reverend Joel Hunter formed a creation care team at his Northland evangelical megachurch in central Florida. “Creation care” describes a movement within the U.S. Christian community to better steward God’s creation, aka the Earth — it is, in short, environmentalism for the faithful. Many embraced Hunter’s initiative. Many did not.

“What are you doing? Are you going liberal on us?” Hunter remembers some of his congregants complaining.

Ten years later, Hunter left Northland. His gentle push toward environmental responsibility wasn’t the only factor in his departure — Hunter also urged his congregation to consider its views on racism, gun violence, and homophobia, especially in light of the Pulse nightclub shooting that killed 49 people not far from the church’s campus. But his environmentalist nudge certainly contributed to the overall perception that Hunter no longer held the same views as his congregants.

Environmentalism and American evangelicals are like oil and water. Joel Hunter was one of a small number of high-profile leaders who worked, over decades, to try to mix the two. The effort has yielded minimal results: Just 20 percent of committed Christians consider themselves active participants in the environmental movement — a number that has barely moved for a quarter-century and represents less than half the proportion of environmentalists in the general population. The proportion of Christians who prioritize environmental concerns over energy production has dropped by about 20 percentage points in the last 25 years. And indications are that the more ardently Christian an American becomes, the less he or she cares about the environment. Evangelicals are the least environmentally inclined of committed U.S. Christians.

This is the biggest obstacle to the American environmental movement. About one-quarter of Americans are evangelical Christians. They also appear to turn out to vote at higher rates than other religious groups, so they wield considerable political power. Then there is the fact that the Environmental Protection Agency is currently headed by an evangelical, the now-infamous Scott Pruitt. His antics have turned him into a laughingstock for his self-dealing, science denial, and cartoonish lack of concern for environmental protection, the mission of the agency he runs. He’s unscrupulous, hypocritical, and dishonest — a walking caricature of the Trump era. He spent $1,560 on fancy fountain pens. And then there’s the bizarre hand lotion scandal.

But outside of the mainstream media and the coastal cities, Pruitt has supporters who like him so much that they’re willing to ignore his petty scandals and Napoleon complex. They like him because he thinks like them: He puts people before the environment, just like God does.

Pruitt has been polishing his evangelical bona fides for years, building a bulwark of unwavering Christian support. In 2003, as an Oklahoma state senator, he championed a bill to insert a disclaimer into school textbooks noting that evolution is just a theory. He has been photographed at religious gatherings making the face evangelicals make when they’re feeling the spirit of God wash over them. He attends Bible study with Ralph Drollinger, pastor to the Republican political elite. Pruitt’s evangelical firewall likely helps to keep him in office. And Pruitt’s evangelical faith almost certainly informs what he does with the office.

Before delving any further into the issue, I should acknowledge that I’m completely secular. I wouldn’t even call myself an atheist, because I don’t spend enough time thinking about God to have an opinion. The evangelical mind is foreign to me, which may be part of why I find this so fascinating. To me, as an outsider, it seems natural that a person of faith would want to keep God’s creation as pristine as possible. And yet that does not seem to be the case.

The conventional explanation is that this is simply due to an alignment of interests: American Protestants have cast their lot with the Republican Party, and since the business arm of the GOP opposes environmental regulation, Christians have gone along. This is Joel Hunter’s point of view. “People are so politicized that they take what is meant to be a practical and spiritual principle of caring for the gift of creation, and they park it in some sort of leftist political agenda,” Hunter laments.

The politicization is clearly a large factor here, and Hunter isn’t the only one to have been chased out of his church because of it — Richard Cizik, the former vice president for governmental affairs at the National Association of Evangelicals, walked basically the same path as Hunter. He spoke up about a cocktail of “leftist” political issues, including environmentalism, and was abruptly forced out.

But there’s something that bothers me about the simplicity and convenience of explaining this all by the transitive logic of evangelicals are Republicans, Republicans hate environmental regulation, so evangelicals hate environmental regulation. It suggests that Christians are willing to cast off their moral obligations for political convenience. Maybe that’s true. Or maybe they don’t feel a moral obligation to protect Earth in the first place.

It’s useful to look back to the dawn of the modern environmental movement, which began in the late 1960s, a time of terrible environmental degradation. American cities were choking in smog thick enough to obscure buildings on the same block, toxic waste flowed out of exposed drainpipes, and rivers were catching fire. The Republican Party of the 1960s wasn’t ideologically opposed to environmental regulation. Richard Nixon helped create the Environmental Protection Agency. Republican Congressman Pete McCloskey co-chaired the first Earth Day. But even then, American Christians were leery of the environmental movement. Why?

Historian Lynn White Jr. offered a theory that remains explosive today: Christianity is inherently anti-environmental. He pointed out that many pre-Christian religions worshipped the natural world, and Christianity defined itself partially in opposition to that worldview. Writing in 1967 in Science, White argued, “Christianity is the most anthropocentric religion the world has seen … By destroying pagan animism, Christianity made it possible to exploit nature in a mood of indifference to the feelings of natural objects.”

White’s bombshell has reverberated through the decades. Scholars still write entire books about it. And it came up in most of the interviews I conducted with academics and pastors.

“Christianity has been competing for market share against nature-venerating pagan groups from its inception, and that continues today,” says Lucas Johnston, a Wake Forest University professor who studies evangelicals and the environmental movement. “The Christians who rejected the environmental consciousness in the 1960s and ’70s perceived a dangerous, nature-venerating, pagan-esque religious sentiment.”

Although his theory has an off-putting whiff of anti-Christian bias, White was onto something. Browse the aggressive anti-environmentalist writing in Christianity today, and you’ll hear echoes of anti-animism.

Read the Cornwall Declaration, for example, a statement signed in 2000 by a collection of Christian leaders opposed to what they perceived to be a runaway environmental crusade. It’s sort of the Constitution of Christian anti-environmentalism. “We deny that forests and trees, mountains and rocks, oceans and lakes and streams, and animals are persons,” the declaration states. Without the context of Christianity’s anti-animist past, that statement seems wholly unnecessary.

Hunter, though, doesn’t buy any of this. “The animism idea means nothing to an average person,” he says. “That’s a theologically esoteric approach. No one I know thinks or talks about it.”

I talked to a series of evangelical Christians, none of whom agreed to be named. Many are obviously uncomfortable with the leftness of environmentalism — one of them told me that conservationists aren’t really “our people.” And while none of my “evangelical on the street” interviews revealed an explicit aversion to animism, there was an inchoate sense that aggressive environmentalism was somehow ungodly.

“What’s animism?” a New York evangelical asked when I probed him about White’s theory. After I told him it was the idea that animals and plants have spirits, he shrugged it off as an irrelevance. But he still added, “People are more important than animals or trees.” It was as if he had intuited White’s theory without knowing the fancy academic jargon.

Calvin Beisner, the primary author of the Cornwall Declaration, wrote to me in an email, “Plenty of environmentalists … have a pretty derogatory view of human beings. That results in phrases like ‘people pollution,’ ‘population bomb,’ or, as Rockefeller Foundation spokesman Merton Lambert put it in 1962, ‘The world has a cancer, and that cancer is man.’ I think a little differently. People aren’t pollution, they’re the solution.”

“It is just not something that is discussed too often in the average Evangelical church,” says Hannah James, a PhD candidate who studies these issues with Johnston. “It’s not vocally denounced, nor actively rejected, but it’s just not a concern or even on most churches’ theological radars.”

This is the challenge facing environmentalists. A large number of evangelicals, arguably the most powerful voting bloc in America, barely ever think about the environment. And when they do, the framework they’re working through suggests that they might be committing a venial sin by putting trees above people.

Thirty-seven years ago, in a discussion of conservation, Interior Secretary James G. Watt mused to Congress, “I do not know how many future generations we can count on before the Lord returns.” You can draw a straight line backward from Scott Pruitt’s scripture-based support for oil exploration, through Watt’s wait-for-Jesus stewardship philosophy, to evangelical ambivalence for the environmental movement of the early 1970s. And if Lynn White Jr. is correct, you can keep drawing that line backward 2,000 years.

In other words, Scott Pruitt isn’t an anomaly. He’s carrying forth a tradition.