For decades, American agriculture has been a paragon of productivity, churning out record crops at a steady clip. We have exported both our farm products and our way of farming around the world, and global production has risen relentlessly.

Yet now, there is concern that even this is not enough. The United Nations projects that the global population will increase from 7.3 billion in 2015 to 9.7 billion in 2050. This growth will be concentrated in the world’s poorest countries, where standards of living are set to rise rapidly, increasing demand for resource-intensive meat and dairy products. Together, these trends are heightening fears that the world’s cupboards may run bare in the coming decades. 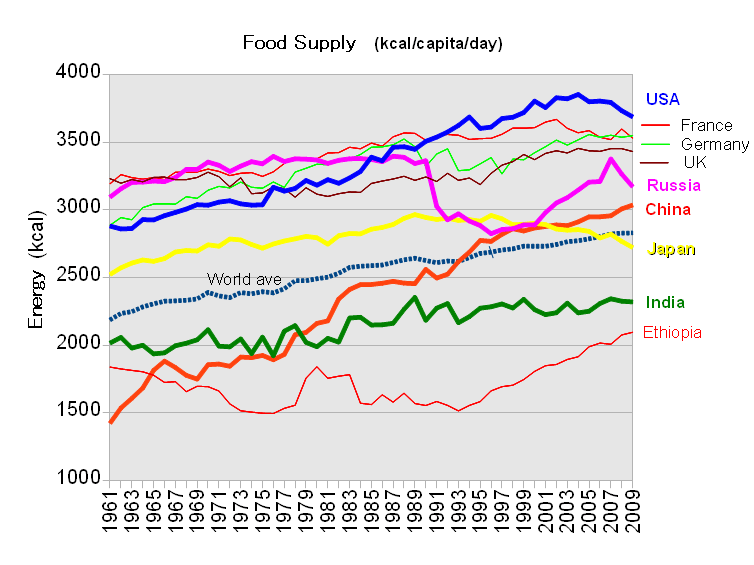 Food availability is higher in wealthy countries than in developing nations. The U.N. Food and Agricultural Organization considers 2700 kcal/capita/day a satisfactory level of food supply. Masaqui/Wikipedia

This scenario leads to the nearly ubiquitous assertion that we must double world food production by 2050, which is widely repeated by agribusinesses and scholars alike. This claim is often coupled with calls to reduce impacts on the environment even as food production ramps up. The common prescription is for a “sustainable intensification” of agriculture that both increases yields and reduces the harmful side effects of tilling and fertilizing billions of acres of land.

But do we really need to double food production? And what will it take for agriculture to be sustainable?

In an analysis published in BioScience, my coauthors and I offer a recalibrated vision of sustainable intensification. We conclude that food production does not need to double by 2050, which would require unprecedented growth, but instead needs to continue increasing at roughly historical rates. We also highlight quantitative goals that indicate the scope of agriculture’s environmental challenges.

Our analysis updates the two most widely cited projections of food demand, one by U.S. scholars and the other from the United Nations, using the most recent available data. Both of these studies used a baseline year around 2005, which made sense at the time they were published, but global cereal production jumped 24 percent between 2005 and 2014. So, we updated the baseline to 2014. We also factored in the most recent U.N. population estimate for 2050, which is higher than the estimates used in the original studies.

Based on our projections, the world will need only 25 percent to 70 percent more crop output in 2050 than was produced in 2014. This includes grain used to feed livestock and, to some extent, grain used for ethanol production. 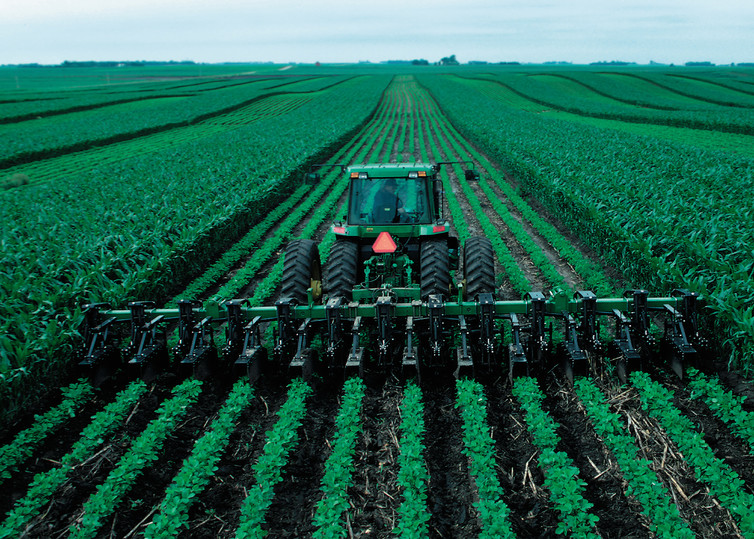 Rows of corn and soybeans on a northwest Iowa farm. USDA NRCS.

We did not question the approaches of the original studies. Indeed, the differences between the two studies’ approaches reflect some of the main uncertainties inherent to these long-term projections, including different scenarios of future economic growth and different assumptions about how growing wealth will affect human diets.

Food production will still need to keep growing to meet our updated goal of a 25 percent to 70 percent increase, but at an annual rate that is closer to the historical average. Hitting these lower targets will put much less strain on the global agriculture system — and the land, water and air that supports it — than doubling production. To double output, we would have to boost food production more rapidly than ever before, driving increases in soil tillage, fertilizer and pesticide use, and water withdrawals for irrigation.

For instance, worldwide greenhouse gas emissions from agriculture are crawling steadily upward. Scientists have called for reducing these emissions by at least 80 percent by 2050 to avoid temperature increases greater than 2 degrees C.

Similarly, nutrient pollution in the Mississippi River Basin creates a massive dead zone every year in the Gulf of Mexico, suffocating aquatic life and impacting commercial and recreational fishing. Reducing the dead zone will require cutting this pollution — which predominantly comes from agriculture — to about half of its historical baseline. Despite decades of effort by farmers and conservationists, annual nutrient loads remain stubbornly high.

Given these challenges, it is good news that the world’s appetite in 2050 may not be as voracious as some estimates have indicated.

Our revised food production and environmental goals are just the beginning of a new approach to sustainable intensification in agriculture.

More research is needed to refine the projections of food demand in 2050 and identify options for flattening the demand curve while enhancing human health. Regional studies are also needed, so that areas poised for rapid population growth can plan for their future food needs. And new research can draw clearer links between environmental impacts and ecosystem outcomes, so that farmers and the public can make informed decisions about the costs and benefits of different ways of farming.

Meeting both production and environmental goals will be a monumental task, especially in the face of new challenges such as water shortages, pesticide resistance, and the changing climate. However, clear targets may help farmers, researchers, and policymakers focus on the right long-term challenges.

Congress has just begun hearings on the 2018 farm bill, which will set policy for five years of agricultural production, conservation, and research. The new bill can support research efforts aimed at refining and achieving agriculture’s long-term goals. Just as important, it can begin transforming farm subsidy, crop insurance, and conservation programs to help farmers make changes on the ground.

With our lower food demand projections in mind, there is an opportunity to start providing incentives for farming practices that keep soils covered with living plants year-round, store more carbon in the soil, and prevent nutrients from entering waterways. More broadly, these lower targets create space for a new conversation, one focused not on doubling production, but on developing a new food system that keeps people fed while focusing just as much on keeping ecosystems healthy.

Mitch Hunter is a Ph.D. candidate in agronomy at Pennsylvania State University.