We're getting close to a bill for the Green New Deal. Here's what we (kinda) know. 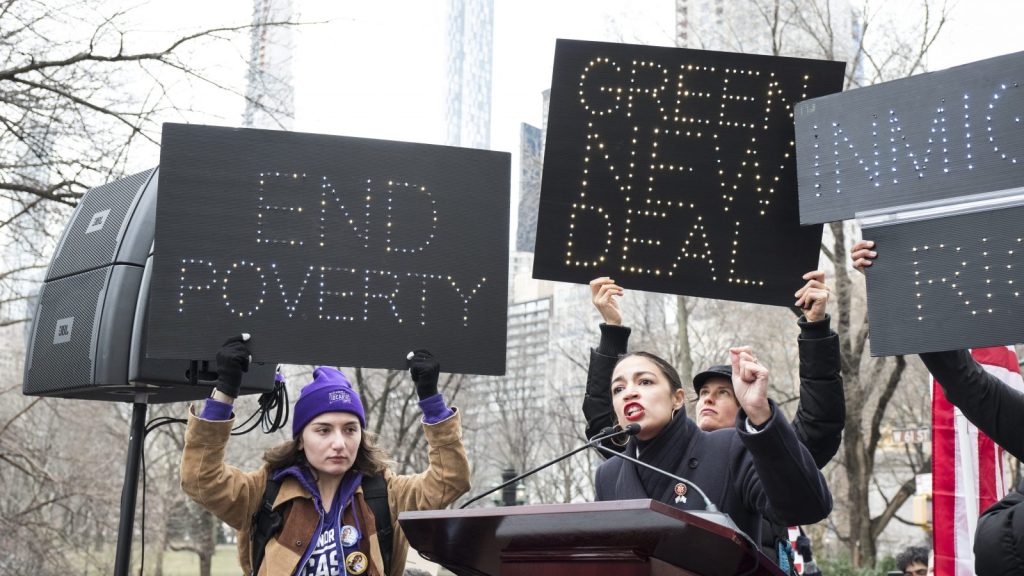 We’re getting close to a bill for the Green New Deal. Here’s what we (kinda) know.

The Green New Deal, that bold proposal to avoid catastrophic climate change, has been heralded as exactly the sort of large-scale action such an existential threat demands. But what’s in it? As New York Representative Alexandria Ocasio-Cortez and Massachusetts Senator Ed Markey prepare to unveil their bill in the coming days, details about what’s actually in the plan are, well, fuzzy.

The draft framework for the bill, championed by Ocasio-Cortez and an activist group called the Sunrise Movement, and originally posted on AOC’s website, promised a bounty of liberal delights: universal healthcare, a federal green jobs guarantee, a transition to local-scale agriculture, carbon-neutral by 2045, and more. But a lot can change in a month. An ambitious Green New Deal strode into Washington, D.C., at the start of the new Congress last month; a different version could soon emerge.

Most of the negotiation around what is and isn’t in the soon-to-be-released bill is being hammered out behind closed doors, between the two representatives presenting the draft and various justice and environment groups. Some of that haggling has wound up on Twitter.

Here’s a snapshot of where things stand so far: First, a Politico reporter noted that two of the most ambitious tenets of the bill, a federal jobs guarantee and universal healthcare, were on the chopping block. AOC’s Chief of Staff, Saikat Chakrabarti, immediately responded to the rumors, saying those elements are still in play.

Then, bans on nuclear power and carbon capture, and the call for an end to oil, gas, and coal development (a distressing development for some activists) were reportedly axed as well. At a Sunrise Movement watch party on Tuesday night in New York City, representatives of the organization said those bans are still part of the proposal. Bloomberg, on the other hand, is still reporting that the early version of the plan “doesn’t explicitly include the ban on fossil fuels.”

Clarity should come next week, when twin resolutions from AOC and Markey are expected to be introduced, according to representatives from Sunrise. But it’s no surprise that AOC and Markey’s legislation has changed during its gestation in D.C.; it will likely continue to evolve as it moves through the Washington meat grinder.

Democratic candidates for president have been proclaiming their support for the “idea” or the “concept” of a Green New Deal. Why the vague language? It might have something to do with the risk involved in backing a proposal that could require $7 trillion, and a commitment to universal healthcare and a ban on fossil fuels. So, if the bill does drop the more ambitious elements of the original draft, it could encourage more candidates to dream up their own versions that could still garner stamps of approval from progressive politicians.

The hard truth is that any Green New Deal bill, even with a number of concessions, has a zero percent chance of making it through the Senate. And, if by some miracle Congress managed to pass the bill, it would surely perish upon reaching Trump’s desk. But the effort could answer an important question: Is 2019 the year the House rallies behind climate legislation?