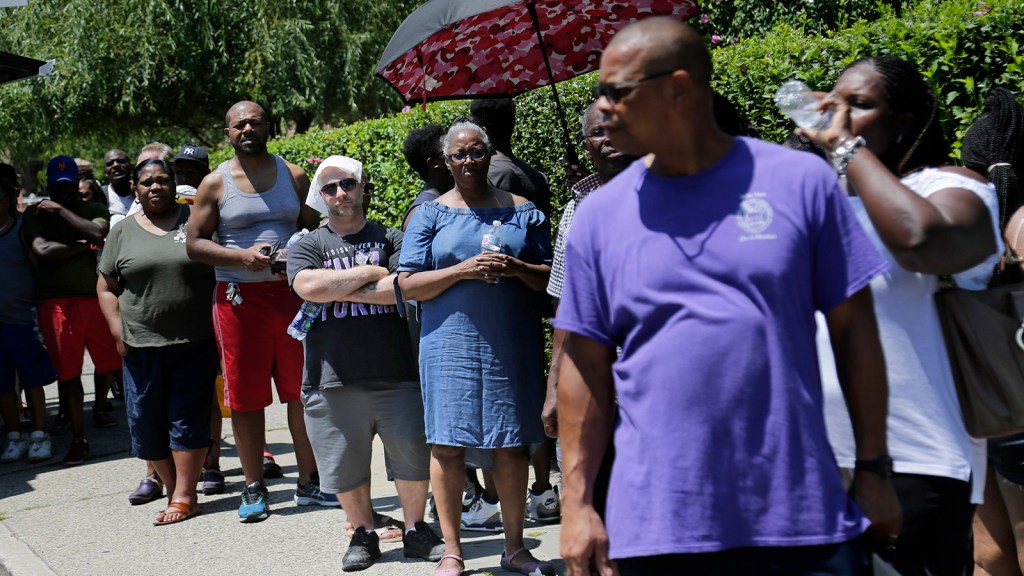 People line up to get dry ice from a Con Edison truck in a neighborhood without power in the Brooklyn borough of New York, Monday, July 22, 2019. Seth Wenig / AP Photo
POWER STRUGGLE

Almost half Americans spent the weekend trying to beat record-breaking temperatures. But for a large swath of New Yorkers, staying home and turning on the air conditioning was not an option, as utility company Con Edison cut cooling power for several hours in several of the heat-strangled city’s most diverse and low-income neighborhoods.

The outages, which started Sunday night, affected nearly 50,000 ConEdison customers, many of whom were among the city’s most at-risk for heat-related death. Extreme heat takes more than 600 lives each year, making it deadlier than any other type of weather-related disaster. For that reason, places like New York City keep track of who’s most vulnerable to the searing heat. And one of the ways to keep them safe is to ensure access to air conditioning. But that’s hard to do if the power goes out.

ConEdison asked customers in southeast Brooklyn to bear with the heat as it decreased voltage by 8 percent in the area to protect its equipment and make repairs after some circuits failed. The utility requested that residents shut off their ACs “if not needed for health or medical reasons.”

By that evening, the company had made the decision “to take [33,000] customers in southeast Brooklyn out of service in order to protect vital equipment and to help restore power as soon as possible.” ConEd said that it had to shut off the power for some neighborhoods to prevent a wider blackout.

The affected neighborhoods included Canarsie and Flatlands, which rank a 4 out of 5 on the city’s heat vulnerability index. Developed by the Department of Health and Columbia University, the index takes into account social and environmental factors that make certain neighborhoods more at-risk during and right after extreme heat events.

“In NYC, the risk of illness or death related to heat waves is higher in communities with higher surface temperatures and less green space, and poor communities of color that have experienced historical racism and segregation,” the Department of Health says on its website.

Canarsie and Flatlands are majority-black neighborhoods (59 percent), where more than 40 percent of residents are born outside the U.S. Although African Americans make up less than a quarter of New York City’s population as a whole, they accounted for almost half of the 100 or more heat fatalities each year in the city between 2000 and 2012.

“I have one question for Con Ed: Why’d they choose us?” said Flatlands resident Stanley Henriquez in an interview with local news outlet Brooklyn Daily Eagle on Monday. “Why are we the ones that have to suffer for the bigger power grid? We pay like everybody else.”

A spokesperson for Con Edison told Grist that the preemptive power outage was necessary to prevent a larger blackout that would have knocked the power out for those residents anyway. “[The neighborhood] wasn’t so much chosen, there were power problems on the system there,” said Alfonso Quiroz. Without the preemptive move, “It could have grown to 130,000 [customers without power] in that area and it would have taken days for us to restore it.”

Con Edison said that it planned to restore power by Monday evening to the remaining 5,000 Brooklyn customers affected by the outage. The utility said it was unaware of the city’s heat vulnerability index or that neighborhoods affected by the blackout ranked high in risk for heat deaths. Con Edison worked to distribute dry ice to customers without power, and Quiroz said the company is “in constant communication with the Mayor’s Office, the Governor’s Office, and the Office of Emergency Management when incidents like this happen.”

Grist reached out to the mayor’s press office but did not receive an immediate response. The office of Governor Andrew Cuomo said in a statement that the State Department of Public Service will investigate this weekend’s blackout along with another blackout that affected Manhattan the previous weekend.

“We have been through this situation with ConEd time and again, and they should have been better prepared — period,” Cuomo said.