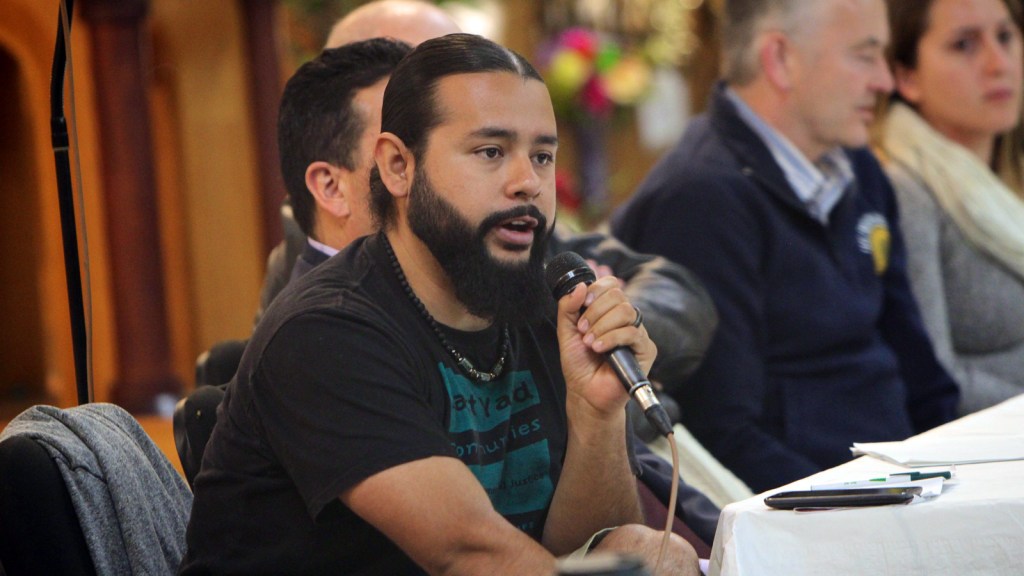 The activist mark! Lopez didn’t attend his first march for environmental justice on foot. He was pushed in a stroller. A winner of this year’s Goldman Environmental Prize for grassroots “heroes” (announced today), Lopez has agitated alongside his family since childhood.

In the late 1980s, when he was growing up in East Los Angeles, Lopez’s grandparents and others took down a proposed state prison, a toxic waste incinerator, and a pipeline planned to run near a school. The 32-year-old Lopez stepped up to help lead the battle against the Exide battery smelter — a factory just outside East L.A.’s borders that for decades spewed noxious chemicals, like lead and arsenic, into neighboring communities that are mostly inhabited by people of color. Activists in the area fought the company for years — citing public health concerns related to lead contamination, such as impaired neurological development in children and increased violence in exposed communities — and the plant officially closed in 2015. Cleanup, however, for which the state set aside $176.6 million, has barely gotten underway and has already hit roadblocks.

According to Lopez, who is now executive director of East Yard Communities for Environmental Justice, East L.A. community members have noticed that the state’s contractor — who is testing for lead in the soil around roughly 10,000 homes in a nearly 2-mile radius from the former Exide site — is underreporting chemical levels. They’ve also claimed clean-up workers aimed racial epithets at Latino residents. The state is now investigating the allegations.

Lopez and other organizers are still pushing the state to expand the radius of homes it’s testing for lead contamination and to offer more resources to account for the developmental issues bound to crop up in nearby communities due to the contamination levels.

Grist caught up with Lopez to talk about his childhood activism, California’s progressive reputation, and what Trump means for future fights for environmental justice. (This conversation has been edited and condensed for clarity.)

Q. What does winning the Goldman Prize mean to you?

A. I don’t look at it as just an individual prize. It’s the acknowledgment of a multi-generational struggle, and I think more than anything it provides us an opportunity to tell that story. If you ask the state, they’re going to tell you they shut down Exide. They’re going to tell you they’ve been doing all this cleanup and they’re going to leave us out of the story. The importance of this is being able to tell the story and hoping that other communities are looking at this, are listening to this, and are seeing the potential for them to also lift up struggles like this in their communities.

Q. How did your family shape your approach to organizing?

A. When my grandparents arrived in the 1950s from Mexico, they arrived to a place that they felt didn’t have community. So a lot of their work before the ’80s was about constructing community. I was born into that. It probably wasn’t until I was in middle school or high school that I realized that not everybody’s family gatherings were at marches. My family was in an organization, the Mothers of East L.A. Santa Isabel, that year after year was working to address issues in our communities. My mom’s going to go knock doors, that means I’m going to go knock doors. My grandma’s going to go to a meeting, that means I’m going to go to a meeting.

A. Growing up, I didn’t think about environmentalism. That’s not what we were doing. It’s not like my grandparents read about John Muir and were like, “Yo, this guy has got it!” It’s not like they visited Yosemite and were like, “Oh man, where we live is fucked up, we should do something about that.” A lot of what’s at the root of environmentalism is about resource management. The origins of the movement my family has been part of is about relationships.

I think the mainstream environmental movement isn’t monolithic. You do have folks who have roots in environmental justice in those spaces now. But we also have, as an example in Los Angeles, these old white teachers in our communities who are members of the Sierra Club telling our folks that the biggest crisis is overpopulation. I walk into a school gym, and half the presentations being done by seniors are about overpopulation and have Mexican flags, Chinese flags, and Indian flags — showing that these are places that are destroying the planet. It plays into this phobia that’s been found a lot in that movement.

Q. California is the most progressive state in the country, but L.A. is an epicenter of environmental injustice. How do those two realities coexist?

Q. So if we can’t count on progressive politicians, what does that mean for the rest of the country under a president hostile to all types of environmental regulations?

A. We tell folks, “We didn’t beat Exide in D.C. We didn’t even beat Exide in Sacramento. We beat Exide on our blocks.” This isn’t a million people marching on D.C., this is folks in our neighborhood stepping up and pushing back. It starts with folks who know each other talking about an issue. That guides our work.

Some folks especially will look at me and be like, “Look at your family. You grew up in that. Of course that’s possible.” But what did my grandparents have when they got here? The community that exists on the Eastside now isn’t the community that existed in the 1950s. So you could say there’s the potential for this type of movement to happen in every community across the country. It starts with everyday folks who feel like enough is enough.